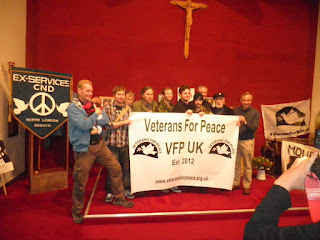 Report from Veterans for Peace UK launch on 9 April 2012

Now even the UK political mainstream is beginning to admit that a going to war in Afghanistan was - after all - a really stupid idea. (We told you so, didn’t the word “Afghanistan” ring any alarm bells?)

Meanwhile, war is glorified certainly more than even before in my lifetime, with all UK soldiers automatically labelled as “heroes” in the tabloid press. While their bravery is beyond doubt, the blanket use of subjective terms like “hero” really has no place in a newspaper that claims to report facts. Anyone who questions the wisdom of sending “our boys” (and girls) to Afghanistan finds themselves marginalised, lumped together with the jihadi nutters and their poppy-burning stunts. Compare this with civilian attitudes to the Army’s deployment in Northern Ireland during “The Troubles,” when a fairly big cross section of mainland UK opinion (especially in London, which bore the brunt of Troubles-related bombings in the UK,) weren’t afraid to say they felt their Army’s continuing presence in the Province was a bad idea.

So the time seems right for the launch of Veterans for Peace UK (VFP), an association of veterans who’ve had enough. Veterans are important in the anti-war movement, because in the words of American veteran Barry Ladendorf, they can “get their foot in the door” and convince people they are “not some crazy peacenik.”

Barry described how he flew home home from Vietnam on a military transport plane, together with five other living soldiers and “250 caskets” containing America’s war dead. He said “war is nothing but chaos and destruction – even to the perpetrators”, adding that “militarism is an ideology… Wars are very easy to get into and very hard to extract yourself from.”

Now an activist with Veterans for Peace in the US, Barry estimates there are 3,000 veterans living homeless in the streets in the county of San Diego in southern California. “The homeless are victims of war… we’ve taken money away form them for war.” California’s state budget is $ 25 billion a year, but its citizens are paying $150 billion a year in federal income tax just for their country’s deployment in Afghanistan. “They do have the money for education… but it’s all gone on the war,” the Afghan one has cost somewhere between one and two trillion dollars so far.

US Army veteran Gerry Condon went underground in Canada and Europe after refusing deployment to Vietnam. He’s an organiser in VFP US and in the Bradley Manning Support Group. Gerry says that since the wars in Afghanistan and Iran started, well over ten thousand have deserted from the US Army and Marines. Some have returned or are in jail, but most are AWOL and “living surprisingly openly… with family and friends,” and risking arrest.

“Several hundred” AWOL armed forces personnel have gone to Canada, usually after serving one term in Iraq, none have yet been granted refugee status there, and “three or four have been deported back to the US” to be jailed.

Gerry has heard of “search an avoid” missions in Iraq, in which the crew of an armoured vehicle will go out on a mission, park under the nearest motorway flyover, and - through notes sent out via “small kids” - let it be known to insurgents that they “don’t want contact” with them, and that “we hope you don’t want contact with us.” There’s been some ingenious tampering with the vehicles’ tracking devices to give commanders the impression they are elsewhere than parked under a flyover. 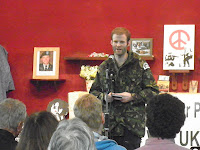 
Ben Griffin served with the SAS in Northern Ireland and Iraq, and left the army after refusing to continue serving in Iraq, after which the Ministry of Defence put a life-long injunction on him specifying what he could and could not reveal about his service with the SAS – details of “special rendition” arrangements in particular. He’s the founder of Veterans for Peace UK, whose launch was seven years to the day since he went to his commanding officer and refused to be sent back to Iraq.

Ben listed the increasing “repetitive indoctrination” habits that are encouraged to militarise Britain’s youth and to make them believe “war is noble” - computer games, parades, soldiers coming on the pitch at the beginning of football matches.

Matthew Horne, ex-Scots Guards, fought in Iraq at the Battle of Basra in 2003, and spent over 100 nights at Occupy St Pauls. 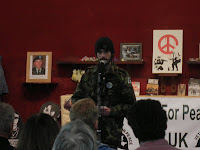 Matthew Horne, veteran of the Battle of Basra and of Occupy St Pauls

He regrets what the government “trick us into doing,” and referred to an old Army saying, “bullshit baffles brains.” Soldiers go to war with “no idea who they’re fighting, no history,” adds Matthew. In Iraq, he asked his commander, Viscount Martin, “who are we fighting?” and his commander couldn’t tell him, he “diverted the question like on Parliament TV.”

Racist terms were used to dehumanise the Iraqis, they were known as “the choccies” during his deployment. More and more Army and Navy kills are long distance, via an “out of touch” infra-red screen view through which you can just see “a figure.”

Basra Shia leader Muqtada al- Sadr was, in Matthew’s opinion, “eliminated from the political system in Basra, not allowed to be part of the reconstruction.” Had he been so, believes Matthew, it “would have shaved seven years of the war.” He and his followers were, he believes, “pushed into resistance.”

Matthew met many soldiers who “sank into the ground” after their experiences. “Private Lindsay from the Scots (Guards)” was the fifth he’d known from Iraq to have since killed himself.

Jim Radford, believed to be the youngest living D-Day veteran, served with the merchant navy in World War Two and then the Royal Navy in the British mandate of Palestine, where his job was to deport shiploads of Jewish immigrants arriving in the territory to Cyprus. He was one of the first members of the Committee of 100 and Ex-Services CND.

“Abused children often end up as abusers,” says Jim, who noted that the Israel, founded by Holocaust survivors, later came to treat its Palestinian residents appallingly, that many French resistance fighters tortured at the hands of the Gestapo became commanders supervising the torture of Algerians during that country’s war of independence, and that the US armed forces - with their considerable sacrifices in the fight against fascism in Europe - went on to perpetrate the My Lai massacre and Guantanamo. 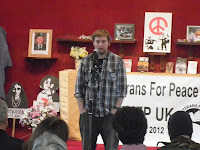 Michael Lyons, who joined the Royal Navy medic, was 18 when he refused to deploy to Afghanistan and declared himself a conscientious objector after reading WikiLeaks disclosures on Afghanistan. He had no religious grounds for his objection, which made his case harder, just “my own moral compass.”

His conscientious objection was denied – and while awaiting an appeal, he refused to do a rifle course. He hadn't handled a rifle since basic training, he was, after all, a medic. He also recalls being shouted down by a doctor on the “Who deserves care?” course in preparation for Afghan deployment, for suggesting that civilian babies he came across in that theatre deserved medical attention just as much as combatants, whatever the babies’ chances of recovery.

The High Court judge at his appeal “seemed to think the Afghan government had asked for an invasion” in 2001. Michael was court-martialled and told by his defence that in such cases he could normally “expect two weeks” in a military prison. He was sentenced by a presiding jury of Naval officers to seven months in Colchester military prison, with a pre-trial threat from some Marines that he would “get his head kicked in” while inside.

Ciaron O’Reilly of Catholic Worker and others raised funds to stop Michael’s wife getting evicted from her accommodation while Michael was in prison. What sustained Michael inside was the huge number of messages of support he got, although the guards told him to take down some of the many “peacenik” postcards he was sent, as they said the symbols on them might “cause offence.” 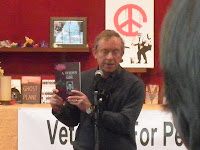 Rob Green, a naval intelligence officer at the command bunker at Northwood (on the outskirts of London) during the Falklands War, thanked VFP’s founders for “giving people hope.” Objecting to Britain’s wars, he said, is “lonely… it’s easier in a dictatorship, you know where you stand.” Bob came out against the war after his aunt, peace activist Hilda Murrell, was “assassinated.” Her death was “to do with the Belgrano” (the Argentinian battleship sunk by a British submarine, despite being outside the Falklands exclusion zone).

After speaking out against his aunt’s death, Rob emigrated and started a new life, where he claims he’s “still being harassed by the British state, even in New Zealand,” where his newly published book on the Hilda Murrell case, A Thorn in the Side, was printed “in great secrecy”.

Twitter for journos for beginners; The Authorisation of Trafalgar; Report policing incidents 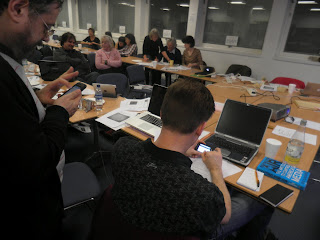 
Pitch your photos
Mojo art editor Mark Wagstaff on how to pitch photography (co-written with Padraig Belton)
Posted by Matt Salusbury at 14:14 No comments: