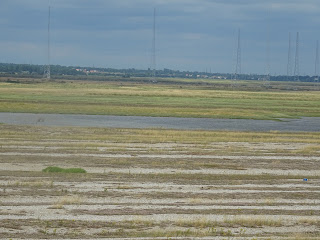 My review of Stuff of Dreams Theatre Company's East Anglian set Cold War drama, Anglian Mist is on Traffic Light Threatre Goer. I caught the play at the opening night of its East of England tour at The Cut, Halesworth. Shown above is my photo of the mysterious Cobra Mist installation as it is today (the project was previously known as Anglian Mist, and then Sentinel Mist) on the Lantern Marshes at the edge of Orford Ness, Suffolk. Anglian Mist is set in Orford Ness.

Wallabies on walkabout in Suffolk

Video footage of a white wallaby hopping down the lanes of Glemsford, West Suffolk, recently emerged on the BBC news Suffolk website. The night-time footage, shot in late September from a camera on the bonnet of Julian Eley's Merc, illuminated by its headlights, clearly shows a white wallaby as it bounds down remote roads on its way to Liston on the Essex border. When it pauses, you can even see its pink-red eyes, showing it's an albino.

This is not the first time an albino wallaby has appeared in Suffolk. Wallabies have been turning heads locally since Mr Wombwell's travelling menagerie passed through Halesworth on its 1907 tour, with the Halesworth Times and Southwold General Advertiser of 3 December 1907 giving particular attention to one animal that "could not even be seen in the London Zoological Gardens. One of these was the albino Wallaby Kangaroo from Western Australia." But the albino wallaby remained firmly in captivity throughout the tour.

The Lowestoft Journal did record the escape of Benny the Benet's wallaby from what was then the Suffolk Wildlife Park in Kessingland in January 1988.

There seems to be a cluster of wallaby sightings around the Wickham Market area. Local man Nick Beagley, cycling from his home in nearby Pettistree towards Ipswich in 2004, had an "absolutely extraordinary" experience when a wallaby appeared, "hopping along the side of my bike before disappearing into the hedgerow."

A dead wallaby was reportedly found in a ditch at Bucklesham, just east of Ipswich, in the same year. An uncredited Ipswich Star reporter also admitted having spotted a wallaby "sitting by the roadside at Warren Heath on the edge of Ipswich" sometime prior to 2004. Kessingland's captive Parma wallabies – a smaller species – were at the time all accounted for, although their spokesman said red-necked wallabies were known to live wild elsewhere in the UK, and "so they could live quite happily in Suffolk." A Suffolk Wildlife Trust spokeswoman told the Star they'd received no wallaby reports. Paranormal Database received a report from a driver and passenger of a "young kangaroo" travelling along Ipswich's busy London Road at around 4pm on the evening of 12 September 2011. Given the unfamiliarity of most Suffolk folk around the various species of kangaroo and wallabies, it could well have been a misidentified wallaby.

I have a family anecdote that may explain how some East of England wild wallabies came to be at large. My mother lived with her mother (my grandmother) briefly at Whipsnade Zoo in Bedfordshire during World War Two. It seemed a good idea at the time, as it was out of London, safe from the Blitz, but within easy reach of London. They knew Erno Goldfinger, the architect, who lived locally near their London house. (Ian Fleming, who also lived locally, didn't like Goldfinger's self-built modernist house and named one of his James Bond villains after him.) Moving to Whipsnade, it turns out, wasn't a good idea. My family didn't know it, but Bomber Command (top secret) was just over the next hill, and it was easy for the Luftwaffe to misidentify a compound of odd-looking modern buildings for Bomber Command. The yak enclosure got bombed at least once, with yak casualties.

My grandmother, who had an active imagination, described one night in the darkness outside the house they lived in on the Whipsnade compound, lifting the bonnet of her car and unscrewing the alternator cap, which you were supposed to do to immobilize your car in line with wartime regulations to stop German paratroopers using it. Suddenly she saw a pair of eyes looking at her, at about the level of a German paratrooper would be were they crouched on one knee taking aim. Then the pair of eyes moved out into the light, revealing - a wallaby! Presumably, the wallaby enclosure had taken a direct hit from Luftwaffe ordnance and the wallabies had got out. They would have since had many years to give rise to a wild East of England wallaby population.

Most of the above historic examples are from my forthcoming Mystery Animals of the British Isles: Suffolk.


Posted by Matt Salusbury at 12:06 No comments: