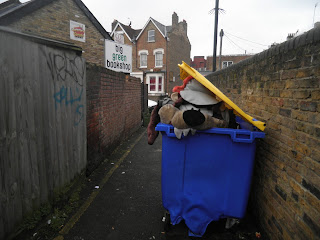 Observed early last Wednesday morning in an alley in Wood Green, behind the Big Green Bookshop. "Taz," the Warner Bros. Tasmanian devil, appears to be gnawing his way out of a wheelie bin, which is very much in character.

(See here for more strange stuff rammed into a bin in the same neighbourhood, seven years ago.)
Posted by Matt Salusbury at 08:13 No comments:

The benefits cap will be a disaster, predicts the deputy head of community housing in Haringey, one of the four London boroughs that will implement the cap early as part of a 'pilot' involving the London boroughs of Bromley, Croydon, Enfield and Haringey that will start on 15 April.

"I will be putting money on it that it was fail, quite spectacularly" when it is rolled out by other councils across the country from September, said Phil Harris, deputy director of Community Housing Services for the London Borough of Haringey. He was speaking to an audience of landlords at Haringey Council's 19 February Landlords Forum.

Harris's analysis focused on impact of the ceiling on Housing Benefit. Deductions to Housing Benefit will be the first step in bringing in the Universal Credit system to replace the many different existing types of welfare benefits.

"Most people will end up being capped… nothing in London's going to be affordable" for people on benefits to rent," said Harris.

Under the Housing Benefit cap, part of the phasing-in of Universal Credits, households will get one payment that's supposed to cover most of the 23 separate current types of welfare benefit. This one payment will include money that was previously covered in a separate payment by Housing Benefit.

The problem is that the new payment doesn't make any allowance for differences in tenure – the same maximum amount will be paid to cover the rents of council tenants, social housing tenants and private tenants, despite the considerable difference in rents between these sectors. There's no differentiation in the ceiling on benefit to account for regional variation – it doesn't take account of the fact that London rents are insanely high. Nor does the cap differentiate for family size – Harris says it's effectively a '"family tax."

Harris says there's a been a lot of talk recently along the lines of families on benefits being able to make up any shortfalls caused in their income by the cap on housing benefit by giving up luxuries like their Sky TV subscription.

But his department have estimated that in the ward of Tottenham – not particularly expensive by the standards of Haringey and actually a little bit less exorbitant than most of London – a family of two children living on benefits will have a shortfall of £293 a month, and a family with three children will have a shortfall of £578 a month. Clearly, this sort of knock-out blow to family incomes isn't the sort of thing that can be made up by little sacrifices like no more Sky TV.

Although the Department of Work and Pensions describe the Haringey experiment as a "trial", Harris says his council make a point of calling it not a trial but a "pilot." (A trial would also include an equal number of boroughs in statistically similar areas where the benefit cap was not applied, with monitoring of relevant data from those boroughs too. What's happening in Haringey, Bromley, Croydon and Enfield is not a proper trial. The DWP will go ahead and impose the cap eventually across England, Wales and Scotland, probably regardless of the outcomes in the four boroughs.) "We say 'pilot,' it does irritate," explains Harris.

Haringey didn't ask to be part of the trial/pilot of the benefit cap – it was imposed on the four borough's chief executives in a December conference call, by an "instruction" from central government.

Harris told landlords that as a result of the Housing Benefit cap, in Haringey in the first financial year of the cap's operation there will be "a £5.2 million loss" in money that's not going to the tenants, and is therefore not going to the landlords either. That's £2½ million in rent for properties in the private sector in the borough, £1.9 million in rent for temporary accommodation, and £1 million in "lost" rent for social housing in Haringey.

£1.8 million has been allocated by central government to Haringey to "tide them over" during the transition to the cap. There are some exemptions to the cap – pensioners, those on working tax credits, those on Disability Living Allowance and the PIP that's about to replace it, although the criteria for the new PIP will be tighter, and many now no DLA will suddenly find themselves outside it.

There was a lot of data-gathering in the run up to the cap, it took the DWP six weeks to check the data on 23 benefits databases in December, and when the data was shared with Haringey there were "some mistakes in it… the data from the DWP is not that accurate so far." Harris warned that "IT, staff, processes are not ready, lots of mistakes will be made."

See here for the likely impact of Universal Credits on the self-employed on a low income, People in this category face having to provide monthly accounts to the DWP.

There is a "We Demand Secure, Affordable, Local, Decent Homes For All" event for Haringey residents on Saturday March 16 at Wood Green Library, Wood Green High Rd, London N22, 2pm-4pm, with information stalls, know-your-rights sessions and discussions about what can be done. All Haringey tenants, mortgage-payers and homeless people welcome. Includes refreshments and a small toddlers' play area. Info: info@haringeyresidents.org.uk 0208 215 9651 haringeyhousingaction.org.uk
Posted by Matt Salusbury at 07:58 No comments: 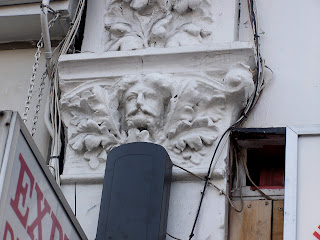 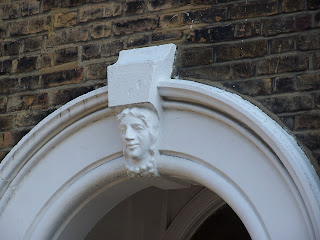 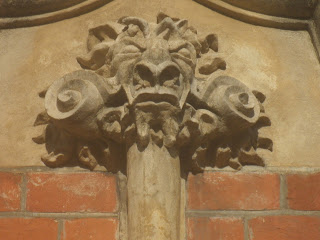 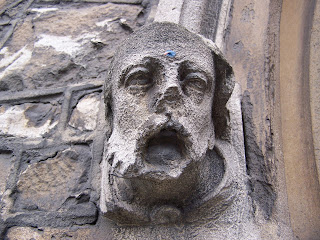 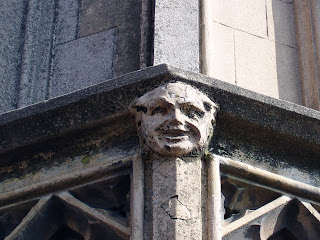 Posted by Matt Salusbury at 07:49 No comments: 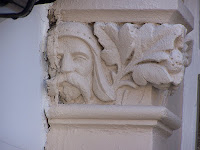 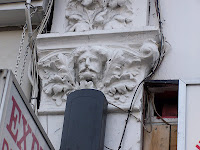 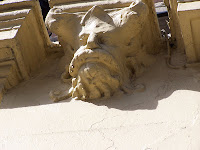 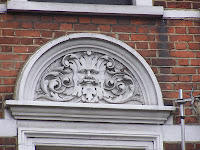 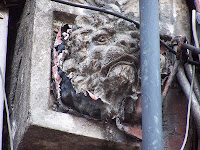 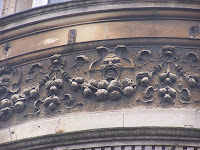 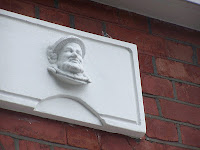 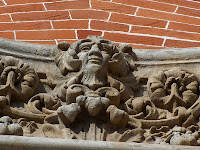 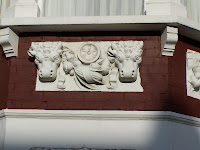 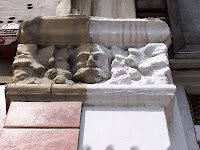 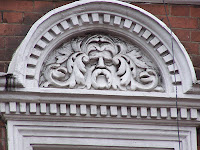 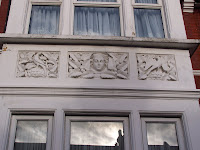 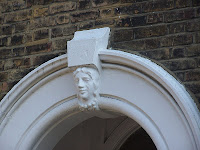 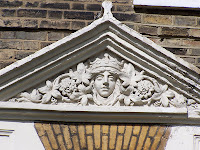 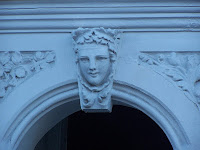 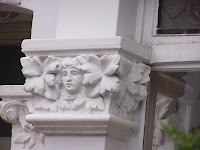 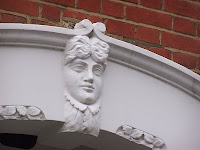 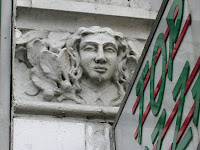 Above Top Pizza, Tottenham High Road
Posted by Matt Salusbury at 07:10 No comments: