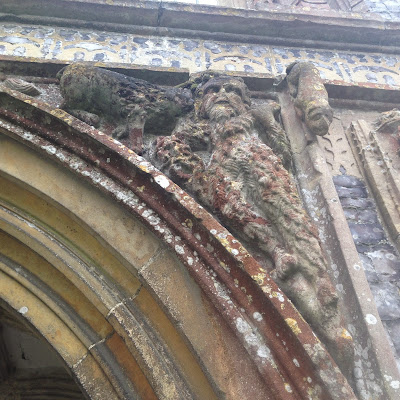 Woodwose on the porch at Yaxley church

I've just returned from a brief expedition to North Suffolk, staying with one multiple big cat witness near Eye and getting a lift back to Dunwich from another one. I was shown round the location of a sighting of an "Alsatian-sized" black big cat of "muscular build" with a "long, thin tail" (on condition of no photographs) and had a quick look at Lowgate Street, Eye, the location of a "big black cat" sighting in 2008.

I was also able to photograph three "woodwoses churches". The first was Yaxley, where there's a magnificent woodwose on the porch with particularly fine detail on the body hair. He's being attacked by two small lions, one broken. (Photo above.)

The second was Mendlesham, where two large and terrifying woodwoses with clubs are on the roof of the porch (it makes them hard to photograph). By the sound of it. Mendelsham had a service on when we arrived, it being a Sunday, as did Wickham Skeith. 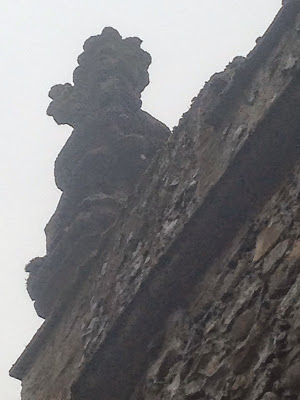 The Wickham Skeith woodwoses - heavily damaged - are on the font, so I knew I'd have to interrupt the service to photograph them. Fortunately, I also knew that the font is usually the first thing you see when you come through the door into the church, so I very carefully opened the door and tiptoed in. There was the font, right in front of me, with the nearest woodwose hacked off with a chisel (the iconoclasts had paid Wickham Skeith a visit), and the tiny congregation - half a dozen of them and the vicar, without any music - were down the other end of the church, so I was able to get a couple of quick photos in without them noticing me. My apologies to the congregation of St Andrew's Wickham Skeith for crashing their service. 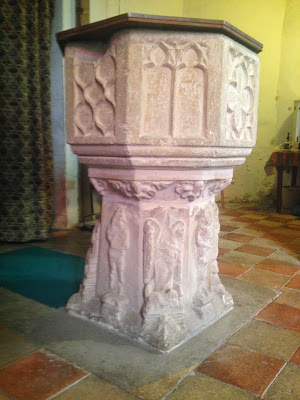 Badly vandalised woodwoses on the font at Wickham Skeith. I had to crash their church service to photograph it.

Forester Paul Berry kindly drove me back to my base in Dunwich, and told me more detail about the Debenham lion of the early 1980s, he thinks it was 1982 when he and his wife saw it.

Paul had also brought along some of his collection of objects that he'd found across Suffolk over the years - some very rare Roman broaches, and some "fairly loaves" - fossilised sea urchins, that were in some cases attached to horses' tackle to ward of the terrifying Good Folk - the fairies, who had a particularly fearsome reputation for causing sickness in horses. 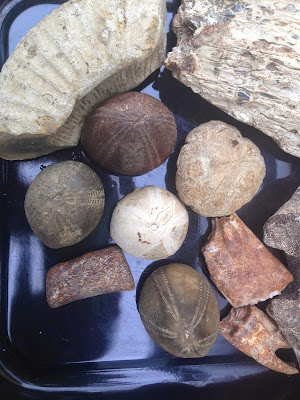 And there were some skulls - a intact skull with antlers of a male fallow deer left behind after a cull on the Shotley Peninsula, a coypu skull found in a hedge near Little Glemham about 10 years ago - impossible to tell whether it was alive after the December 1989 last known report of a living coypu in England. (Natural England in a FIOA request revealed they keep getting reports of coypu, but when they follow up they find they're misidentified - often otters and sometimes even water voles.)

There was also a skull Paul thought was from a badger - with a part of the snout missing - but Paul wasn't sure, as he thought it was too big for a badger. 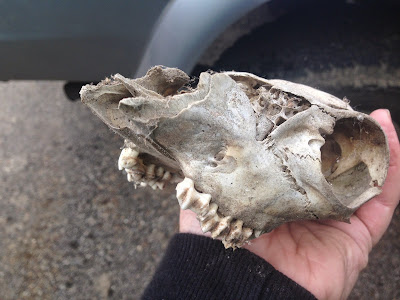 Is this from a badger?


And finally, there was the skull shown below - badly damaged and missing a lot. Paul found it in the river near Framlingham ten years ago, but it was after Framlingham Mere - the lake next to the castle - had been dredged, so it's possible they'd been lying in peaty silt that preserved them for a few hundred years before ending up in the river. Paul thinks it's a pig, because of its flat head. Any ideas? 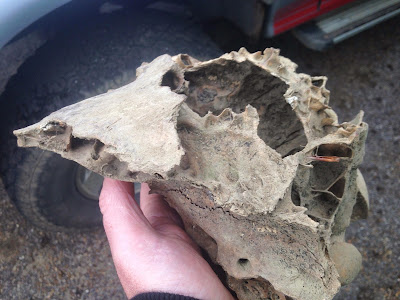 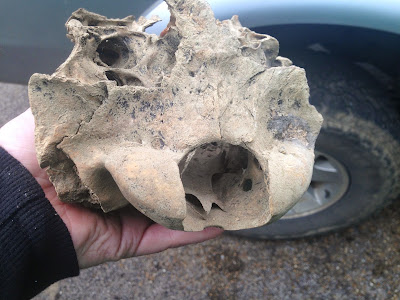 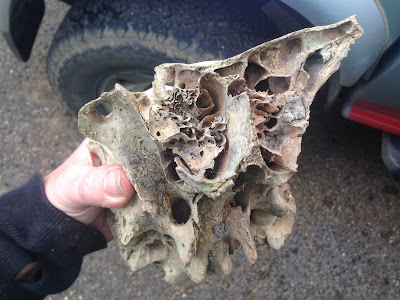 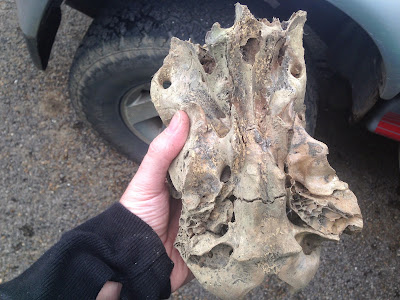 What's left of the underside of the skull

A first draft of the big cats section of Mystery Animals of the British Isles: Suffolk will be ready soon. It'll be published sometime this summer by CFZ Publications. Meanwhile, you can follow it on Twitter here.

Posted by Matt Salusbury at 06:56 No comments:

I recently had the chance to visit Suffolk's Gisleham Fossil Quarry, at the southern end of the EE Green building waste dump just outside the village. The village is pronounced "Gizz-l'm" and the locals know the quarry as "the old brickworks site." 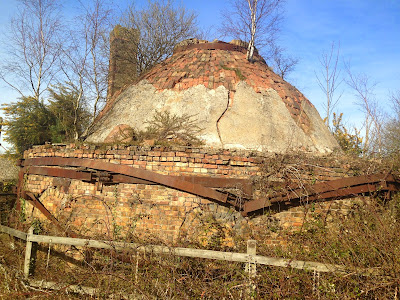 There are some impressive abandoned brick kilns, which Film Suffolk should consider renting out as a film location, something in the steampunk sci-fi post-apocalypse department.

The fossil quarry is a precarious slide down a slope, I'm told the best time to come is after heavy rains, when fossil-bearing fragments are washed down by the rain. I'd brought along some chisels, but it's all stuff you can pull out. 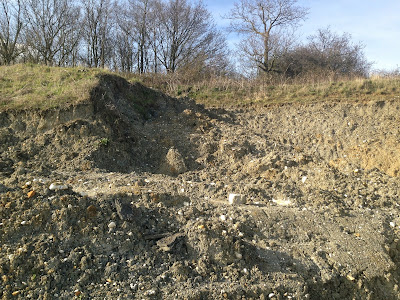 Edge of the quarry

I pulled out some small marine invertebrate fossils (trilobites? Crustaceans?) but they'd flaked away into powder in my pocket by the time I got home. It would require quite a patient trawl to find anything, although small reptiles as well as seashells have been pulled out of Gisleham, as well as some of the world's biggest teeth of the giant shark Megalodon. 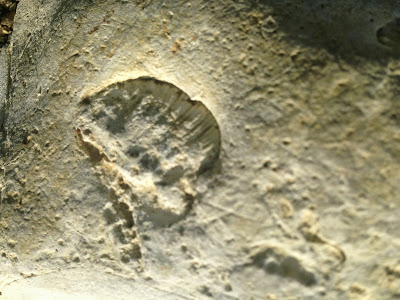 Mesozoic sea creature in chalk at Gisleham, on a chunk of chalk too big to fit on a bike, so I left it

There's also a lot of (living) wildlife there, with rabbit holes and a rather obvious fox burrow in the sandy soil. I saw rabbits running around when I arrived, and as I left I saw a large fox out of the corner of my eye scampering around the cliffs - in broad daylight.

Gisleham was a 90-minute bike ride from my base in Dunwich Forest, including a couple of shot stops and a pleasant detour through the Benacre Estate to avoid the A12 road. It would be an easy cycle form Lowestoft of Oulton Broad stations (there's a cycle track from nearby Carlton Colville all the way to Oulton Broad and Lowestoft.) There's a bus at least every two hours to Gisleham Monday-Saturday from Lowestoft, Kessingland or Southwold.

Posted by Matt Salusbury at 09:21 No comments:

Angry Language Brigade brighten the day of an education correspondent

English language teaching is not a glamourous industry, there very few freebies or glamorous parties to which we at industry publication EL Gazette get invited (I'm it's news editor). It's quite unexciting. There are very few occasions when you have to write your emergency NUJ legal helpline number on your arms with a permanent marker before going out on assignment.

However, in recent months there have been a couple of these. In contrast to most private sector Teachers of English as a Foreign Language (Teflers) who just whinge and tut about their working conditions and put up with them, Angry Language Brigade (ALB) have a preferred tactic of office invasions of the receptions of employees who commit "wage theft" (have issues around outstanding payment of wages). Other ALB tactics include getting all their anarchist mates to harass said employers via Twitter and Facebook.

ALB invited me along to observe and report on one of their "actions" recently, in which they charged into the reception of a language school on Oxford Street. Management apparently held the door of their office closed in an attempt to keep them out. There was a chorus of the hymn of the radical syndicalist union Industrial Workers of the World (some ALB are members, some are not) before they retired to the pub, where an email reportedly followed from management basically saying, "What do you want?" It's all here, with a suitably punk soundtrack.

What was particularly bizarre for me was that the ALB had got the wrong building on their first attempt, and it was the SAME BUILDING WHERE I USED TO TEACH ENGLISH back in 1998, when it was the premises of the Mayfair School of English! Spooky! (Mayfair moved out some time ago.) While a confidentiality agreement between an employee and management prevented ALB from naming the school, they did point out that their gagging order on the Tefler was "fairly pointless considering the English Language Gazette had got a hold of it". (See also here.)

ALB were then part of the crew then went on to occupy the premises of the Leicester Square School of English over the Christmas holidays, as they hadn't been paid. One of the teachers (one of them, not all of them) then got a letter over the holidays saying the school had closed. The occupiers found what appeared to be an attempt to cover some evidence trails - phone lines at the school had been cut, hard drives had been removed from computers, and there was a mysterious invoice from a shredding company in Manchester for "shredding services", seen by the Gazette. (Space did not permit us from mentioning it in our short article, here.)

And ALB's campaign against the school's owner, Craig Tallents, continued relentlessly. Soon he had wound up his bizarrely-named marketing company, Asparagus, and resigned as governor of Bancroft School. There were pickets outside the Drapers' Guild, where he is a apparently a liveryman, and social media attacks on his local residents' association, where he holds some kind of office. Teflers are an extraordinary timid workforce, so when managers find themselves up against the loud and relentless ALB, they don't know what's hit them.

ALB say they've also come across a proliferating phenomenon of English language teachers on "self-employed contracts," which would appear to be illegal. While the position was recently liberalised a little bit, I understand that it is only occasional lecturers and trainers who do things like take money directly from students, hire the classroom themselves, or give "occasional lectures" who can be self-employed. Teachers who do regular "timetabled hours" must be employed on PAYE contracts.

This is under the HMRC's "Work Status" rules, although after initially agreeing to help us on this story, HMRC's press changed their mind and decided they were going to be less helpful, saying they couldn't comment on either a specific case or a hypothetical situation, which pretty much rules out everything that they might be able to comment on.

They did say that teachers who believe their "self-employed contract" is illegal should contact them - in confidence - via their Reporting Tax Evasion helpline. Good luck! We think that in practice, HMRC will go after the easier-to-recover employer's contribution National Insurance that's unpaid, and probably won't bother coming after small amounts of National Insurance Class 2 contributions from teachers.

ALB and EL Gazette's editorial team would love to hear from you if you are a Tefl teacher working on "self-employed contract" (current or recent), as would Katie Grant, an education journalist writing for The Independent on "self-employed contracts" among Teflers in London, on k.grant@independent.co.uk. (EL Gazette's web people warned us that the website's email was down at the time of writing, but assured us it would be back up soon.)


Posted by Matt Salusbury at 09:01 No comments:

I'm surprised to find that Thatcherism Goes to College is still being quoted after all these years. (I call it Thatch Call for short, for convenience.) I was clearing out some surplus copies the other day - you can have one for £1 plus postage if you email me - and I noticed how god-awful the two-colour cover was, and how tame the scariest predictions for what would happen to education were compared to what actually happened.

The book, which I wrote in 1989, is now "historical background" to articles about the politics of education by Marxist academics (meta-academics?)

Posted by Matt Salusbury at 08:13 No comments: