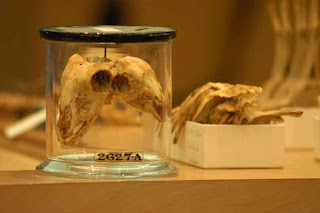 They look like gone-wrong GM experiments, or the products of chemical contamination or the fallout from Chernobyl, but many of the specimens in the Natural History Museum’s ‘anomalies collection’ are well over a hundred years old.
This isn’t a collection as such, and is spread over the mammals collection, as ‘abnormalities fall outside taxonomy.’ The curators are careful to avoid tasteless sensationalism, but that’s how the museum started, as a ‘cabinet of curiosities’ assembled by the likes of Hans Sloan, founder of the British Museum, from which London’s Natural History Museum (NHM) grew. The mid-seventeenth century collection mania of the aristocratic “grand tour” set included collecting ‘oddities and abnormalities,’ and there were even Mediterranean cottage industries turning out fake prodigies in the form of altered skulls or tampered-with stuffed animals.
Gradually, the cabinet of curiosities came to be arranged in a more orderly fashion, in a way supposed to reflect the organisation of the natural world. The freaks became an embarrassment and were relegated to the cupboards, eventually ending up in storage in the eleven-storey Mammal Tower at the Museum’s site in Kensington. Some of these prodigies were brought out for a rare public viewing at a well-attended one-off ‘Freaks of Nature’ lunchtime lecture event last December. The curators who presented them were clearly enjoying themselves. NHM Mammals Curator Richard Sabin told how he had been inspired to go into zoology by a childhood of Bank Holidays spent in the back of the car being driven by his dad, looking for a suburban museum where he was promised a two-headed pig. (They always got lost and never made it to see the two-headed pig before closing time.) “Now I get to work with a pig with two bottoms,” said Sabin, with some pride. 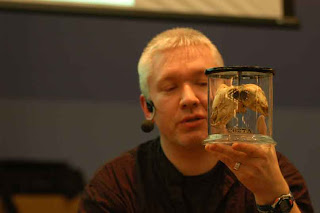 
Specimen 79522, as the pig with two bottoms is officially known, was acquired from Barry Knight in Edwardian times. It has two bodies and a single head; the ‘extra’ two front legs protrude out of the creature’s back. It almost certainly died as a newborn piglet. Sabin says that, while we are uneasy about the current high-speed genetic modifications science is throwing up; selective breeding has been going on for thousands of years with domestic animals. Sabin notes that, with ‘their genes tampered with by humans for so long,’ most freaks that turn up are pets or farm animals. ‘Egypt and Ancient Rome documented deformed domestic animals as portents of the gods.’ (See FT 224;21 for a survey of domestic prodigies from Greek and Roman sources, and FT 223: 57 for a seventh century Korean ‘pig with two bottoms,’ interpreted as a favourable omen.)
While Sabin’s predecessors locked the freaks away, dispersed among the Museum’s three quarters of a million mammal specimens gathered over 250 years, the freaks have long been in constant demand for study by vets, looking for clues to ‘developmental defects’ in pets and cattle.
‘It’s a difficult thing to admit you have a passion for two-headed sheep,’ says Sabin. The Museum’s ‘very small collection of abnormalities’ includes two examples of conjoined sheep, both of them newborn lambs. One conjoined sheep skull came from a hospital medical collection and has a large skull joined to a smaller skull, ‘one skull hasn’t developed to the same degree.’
Another two-headed lamb specimen has two skulls that haven’t separated. In the centre of the face, the left and right eye socket of the two skulls have fused into a single third socket – there are two rows of teeth of the first and second skull side by side. It’s ‘fantastically symmetrical, (this is) not that uncommon in domestic animals… We’ve tampered with their [domestic animals’] genes through breeding.”
The Museum’s collection of ‘polydactyl cat leg bones’ is a section of wooden board with the bones of the front limbs of several cats stuck to it. They have extra toes, some up to seven on each foot, ‘quite damaging to your sofa,’ comments Curator Daphne Hill.
Frank Buckland, the nineteenth century naturalist, passed to the Museum a box of delicate rabbit skulls where the top and bottom jaws didn’t ‘fit’ with each other, so that the teeth weren’t wearing down. Ms Hill showed the ‘huge corkscrew teeth’ in these skulls, but added that many corkscrew-teeth afflicted rabbits grew to a ripe old age, apparently not too bothered by their bizarre deformity. Ms Hill also showed us two skulls of hippos, each with one endlessly growing corkscrew canine – but the animal had survived this. And the Museum’s aircraft hangar-sized depot in Wandsworth, South London, has ‘twenty-one and a half skeletons of large whales,’ including sperm whales with lower jaws that grew into outlandish corkscrewing curling shapes, but their ‘teeth wear shows they lived to their early teens.’
The most surprising aspect of the NHM’s hard science freak show was how often deformed animals in the wild made it to a ripe old age. This suggests that we may be wrong in our received ideas about ‘nature red in tooth and claw,’ with the stronger animals eliminating the ‘weak’ of their own kind. Ms Hill showed a the skull of a North Canada wolf with a short muzzle, the upper jaw’s teeth didn’t fit the lower jaw, so it couldn’t bite its prey. It was an adult and ‘had very worn teeth as if eating scraps which shows that as a pack member there was some kind of social organisation that allowed it to survive.’
‘Evidence for social interaction’ that accommodates deformed members of mammal communities could also be a force at work among North Sea white beaked dolphins. In the course of a century, the Museum has acquired sections of vertebral column from three different individuals of this two-meter long species of dolphin. The vertebral columns are ‘bent like the U-bend of a sink,’ giving the dolphins floppy spines. This was ‘something that developed in the womb’, but the dolphins that had this deformity were adults with full stomachs when they were found washed up on the beach. Either a floppy spine doesn’t matter so much when you’re buoyed up by water, or the pod of dolphins were organised to feed their floppy-spined members by driving shoals of fish at them. 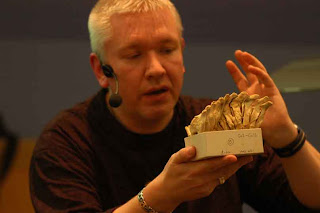 Sabin with floppy porpoise vertebrae. Photo: Copyright Isabelle Merminod, all rights reserved.
Sabin also cast light on a possible explanation for some sea monster carcasses. He said that when whales decompose, their skin detaches as the outer layer of blubber rots away. The skin floats away, the skeleton in some cases come out of their mouths, leaving an indistinguishable “globster” mass.
The Mammal Tower’s cabinets also house a stuffed cheetah from Rhodesia (now Zimbabwe) that, unlike normal spotted cheetahs, was striped along its back. It was found in 1927 and named as a new species of “King Cheetah.” Recently, an orphaned cub with the same markings was found, and it bred at South Africa’s Kruger National Park. It had one or two striped young; the others were normal spotted cheetahs. The collection also has stuffed Indian civets with anomalous white paws, and specimens of the Bull Island mouse. Bull Island is just off the coast near Dublin, and is a sand bank, which formed just over 200 years ago. Since then, mice that colonized the island developed a freakish sandy colouration, and it was such an ‘advantage to be yellow on a sandy island’ that the whole population is now sand-coloured.
Some animal deformities aren’t the result of gone-wrong embryology, but of animals coping with disease or even accidents. Roe deer usually shed their antlers once a year. Antlers that – for whatever reason – don’t shed take on a weird form, like a shapeless mass of fuzzy, velvety coral. We were also shown a roe deer’s lower leg illegally snared on the Sussex coast. Wire had cut into the bone, but bone has grown over and around the site of the wire snare, the snare had been round the deer’s leg for at least two years when the deer died, of natural causes. It had lived a long time, it had a mature skull. The bone could have grown around the snare in under a year, ‘bone incredibly reactive material,’ Sabin explained.
The NHM is now proud of its centuries-old freaks, recognizing that they ‘underpins the modern museum,’ and
acknowledging the role they played its foundation. But there are no plans to put them on regular display to the public, and the NHM still does draw the line somewhere. There are no cyclopean freaks in its collection. Ms Hill says they were offered a stuffed rearing cyclopean foal from a private collection that was up for auction, ‘but it was on offer at quite a high price and we don’t normally pay large sums for specimens.’
The newly-opened Wellcome Collection, also in London, has anomalous animal specimens including a two-tailed lizard, while the city’s Hunterian Museum at the Royal College of Surgeons has a truly stomach-churning collection of human foetal anomalies. 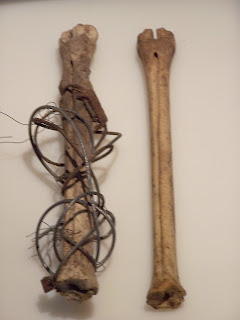 Two bones from legs of an adult red deer in the Museum's collection. It had caught one leg in an illegal wire snare, and the bone had grown round the cut over several years. Photo: copyright Matt Salusbury

Thanks to freelance photographer Isabelle Merminod for kindly agreeing to licence the use of her copyrighted photos for this site only. You can see more of her documentary photos on her website.

Update (October 2012): I visited the Museum Nationale d'Histoire Naturelle in Paris, which is itself a museum piece dating from the days of Baron Georges Cuvier, the turn of the 19th century founder of comparative anatomy. In its truly stomach-churning hall of skeletons and pickled bits of baboon and so on, it has a little corner of conjoined twin births of calves and cyclopean kittens, among others. Mercifully, they're not the actual pickled freaks themselves, but painted plaster-casts of them, and they are at least 200 years old.

The Museum being a temple to immediately post-Revolution enlightenment and the Age of Reason, there had to be a scientific point to its gruesome freaks display, and a didactic purpose to it for the edification of the masses. They found one - the freak plaster casts are divided into freaks "with an axis of symmetry" and "without an axis of symmetry".
Posted by Matt Salusbury at 07:23