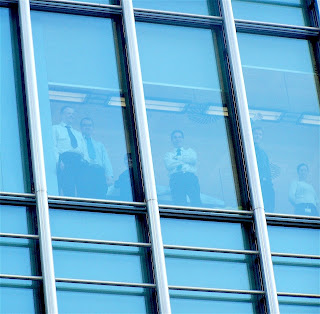 While on the subject of troubled institutions, here's a photo I took in (for them) happier times of the dealers gathered at the window of the Lehman Brothers London office, having a giggle at the Mayday 2007 anti-capitalist protesters gathered in the square outside. The Lehman Bros. dealers seemed much amused at the anti-capitalists, who were protesting what they saw as the unsustainable nature of the financial system. Who's laughing now?
Posted by Matt Salusbury at 07:44