The January 2009 Freelance is now on the web. My articles include…

What photo book publishers want
Advice on getting photography books published, from a specialist in the field, independent publisher Dewi Lewis. Read this article on the Freelance website.

Cash from pic research
Writers can make more money on the picture research side of the features they write - if they ask for it.
Read this article on the Freelance website. 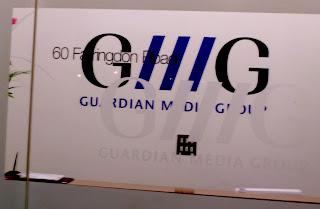 The pod people are here! - at the Guardian.
The Guardian and Observer have just moved to a new site at Kings Place (apparently with no apostrophe) in King's Cross. Their operations will completely change. The staff will be re-organised into "pods"…. Read this article on the Freelance website. Thanks to Tom Davies for the info, and to my editor and co-author Mike Holderness for inventing the word "podhead" to describe the leader of a Guardian media ‘pod.’ (Picture: Guardian Media Group office reception, opposite the old Guardian and Observer offices, recently vacated, in Farringdon Road. © Matt Salusbury)

Snapping or writing about coppers to become a crime?
Reasearching the details of individual police officers or members of Her Majesty's armed forces may soon become an imprisonable offence, under the Terrorism Act 2008, which received Royal Assent in November… Read this article on the Freelance website. 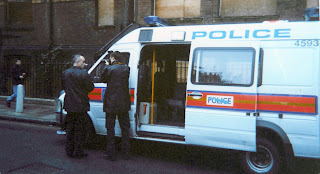 These police officers from the Metropolitan Police Forward Intelligence Team (FIT) seem to have taken a keen interest in me over the years, enough to have given me the "photographic reference number" 1481. Would I now be committing an imprisonable offence if I tried to find out more about individual officers with FIT or other units? Picture: © Matt Salusbury
Posted by Matt Salusbury at 07:14