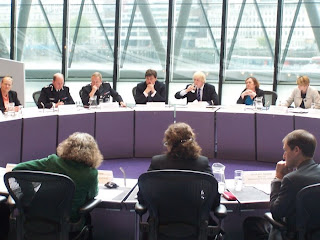 The policing of the G20 protests came under scrutiny today (Thursday 30 April 2009) at a public meeting of the Metropolitan Police Authority (MPA), the London Assembly body that watches over the Met. Assembly Member Jenny Jones in particular gave the police a run for their money, asking why the police had refused to let her into the Bank of England kettle, and why “very aggressive tactics” were used to remove the Bishopsgate Climate Camp. Assistant Commissioner Tim Godwin -– standing in for Commissioner Stephenson, who was recovering from appendicitis – and Assistant Commissioner Chris Allison – were there for a grilling.

London Mayor Boris Johnson – who chaired the meeting – opened by saying of the G20 that “everybody in London and in the country (was) horrified by some of the images of what happened particularly to Ian Tomlinson, his family need answers and need them urgently.” Boris said he approved of the Independent Police Complaints Commission (IPCC) and Her Majesty’s Inspectorate of Constabulary inquiries, but reminded everyone that the police “do a fantastic job.” This was met by shouts of “Rubbish!” from the public gallery, the first of many lively interjections from the public, particularly from Class War people, and particularly on the subject of tasers. Boris later threatened to have the meeting “suspended” (closed to the public) if they didn’t shut up. One woman in the gallery was masked up as if for a demo.

Tim Godwin for the Met said that while it was “probably unlawful for us to comment” on incidents of police conduct that are now under criminal investigation, but “we will not tolerate any MPS officers to make inappropriate comments via the internet” and that one officer had been resigned over this already. He admitted of the G20 policing that “we have a number of serious issues” that need to be addressed, and added, to laughter from the gallery, that the Met “can and want to learn better.” As Jenny Jones said, “I can hear the waves of doubt behind us” coming from the gallery.

Evidence from protest groups
The Authority invited Andrew May of the group Defend Peaceful Protests to come and put questions to the police at the meeting. All the G20 inquiries are going to take evidence from protest groups. Tim Goodwin said the HMIC enquiry had already taken a lot of evidence from the Climate Camp legal team. One new bit of terminology that kept popping up was concern for the rights of the “vulnerable protester” – examples given were Ian Tomlinson and a pregnant lady who was only eventually allowed to leave the kettle to go to the toilet. One MPA member, herself disabled, said she had wanted to go to the protests but had been “too frightened.”

Police identification numbers
There was also laughter at Tim Godwin’s suggestion that some officers had no identification numbers on G20 duty because “some come off by accident.” He said, “anyone not doing that (displaying their number while on duty) will be in deliberate disobedience of a direct order.” The Met’s Clothing Board are on the case to make sure that reflective tabards will carry shoulder numbers, and coloured shoulder flashes identifying heads of “serials” that obscure shoulder numbers will be changed. Chris Allison said he’d been out on the Tamil protests enforcing police regulations on the wearing of identifying numbers.

It was news to the MPA that the Met had very recently forked out £85,000 in compensation to those who “shouldn’t have been arrested” at an October 2008 Mexican Embassy protest. Why hadn’t they been told earlier? Boris agreed that there were “communications problems” between the Met and the MPA here.

Kettling
Much of the meeting was, in Boris’ words, a “discussion about what I would call kettling” and police cordons, and on what MPA member Toby Harris called “the degree of permeability of the cordon.” Neil Johnson of the MPA, asked, “how can protesters extract themselves?”

Chris Boothman, who has a lot of experience of the Notting Hill Carnival, asked if police had asked behavioural experts about the effects of containment in the kettle, and whether “containment can exacerbate the situation.” Dee Doocey said she’d heard reports of people as they left the “kettling area” being forced by police to delete mobile phone images under the Terrorism Act. Clive Lawton says that the Met had in its mind-set divided up protesters into “those who were full of villainy before they started” and a group of people “who get stirred up an excited,” and how being in a crowd affects the individual “being contained in a space, getting angrier” and said more attention and research needs to be paid to this.”

Forcible deletion of photos
Chris Allision said that “there is no tactic that says as we release people we make them delete their photos. We fully accept that people are going to film us and have a right to film us.” Forcing people to delete film is “not a tactic and not a policy.” Boris said any cases the MPA hears of this will be brought before the Authority.

Clearing the climate camp
John Biggs said he didn’t like the “innocent protester thing”, the casual distinction made by the police between “innocent protesters” and others who are somehow inherently wicked. Several MPA members pointed out that a policing tactics affect all Londoners, whether they were at the protests or not, and that many Londoners who were nothing to do with G20 may at some point, quite legitimately, want to go on protests in London in the future. “I’m sure 99 per cent of Londoners don’t have the faintest idea or what Section 4 or Section 14 (Public Order Act 1988) is. For ordinary Londoners in that (climate) camp, there’s a potential for a lot of confusion, a need to communicate more the reasons for clearing the camp, how it (blocking the highway with the camp) affects London.” He asked “whether people in the camp had it made clear to them that it needed to be cleared,” and that it was made clear to them by police that it was legitimate as well as strictly legal to do so.

CCTV
Jennette Arnold was concerned about how the police service appeared to be unaware on the level of “disturbing actions by officers”, with all the CCTV and “eye in the sky,” why was this not picked up, and if it was not picked up, what is the point of all these CCTV? “CCTV should be two way, for policing, and for taking action against police misconduct on behalf of the “vulnerable protester.” To applause, Jennette said that “if you’d seen an attack on a police officer, we would have found the CCTV of it.”

Tactical Support Group
There was also a lot of scrutiny about the “culture of the TSG (Tactical Support Group).” Chris Boothman asked, “is there something about the make-up of the team, the values that they hold, that actually produce some of the incidents?” Reshard Auladin said, “ever since this authority has existed, there have been issues with a few officers of the TSG.” The suggestion of dispersing the TSG to boroughs was mooted. Boris admitted, “ I do think there are specific concerns about the TSG.”

Boris Johnson’s role in G20 policing – and media hype
It wasn’t just police that were in the hot seat. John Biggs said “the public will always see politicians as hiding behind police,” and asked Boris, “what role did you have in this?”

Boris said his role in the G20 policing was an “entirely operational matter” and that it would be “inappropriate to comment” and “quite wrong for me to micromanage the operation”. He said only that he had a meeting with Gold Commander and regular briefings in City Hall. Pressed on the “guidance” he had given to the police at G20, Boris said “my view was and remains, the overwhelming majority who came to London had to right to do so… those bent on violence should be impeded” and police should do so as effectively as possible. But the G20 policing had produced what Boris called “disturbing images… which is why we are here.”

The MPA also criticized London Mayor and MPA Chair Boris Johnson in his “third role as a columnist.” Having (as Mayor) urged the media not to hype up the protests ahead of the G20, Boris in his 24th March Telegraph column predicted protesters would “surge like the orcs of Mordor” and described cider-fuelled protesters as “rioters”. While he admitted that his predictions had “not been vindicated by events” he said his words had turned out to be “an accurate description of some of the people there” and stopped short of promising not to do it again.

Old Tactics
I couldn’t help noticing that the examples the Met cited of protests on which they based their G20 tactics were a long time ago – N30 (November 30 1999) and Mayday 2001 – tactics that were widely condemned at the time and, eight years later, now seem rather old.

A transcript of the meeting and a webcast will be on www.london.gov.uk shortly, if it isn’t already. 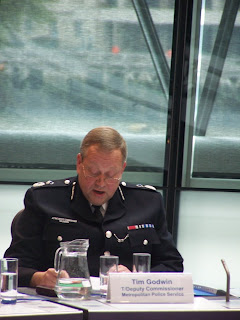 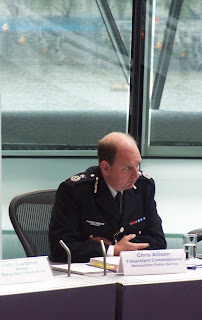 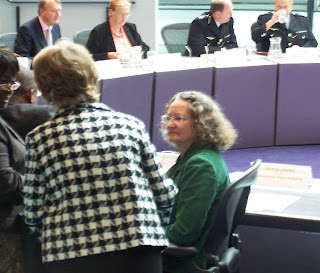 MPA member Jenny Jones about to get tough with the police, as usual 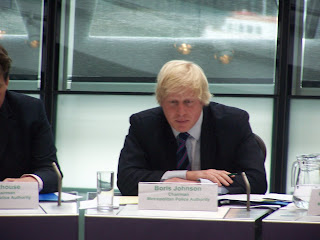 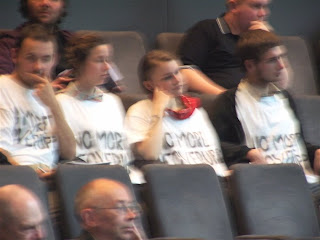 "No more cover up" T-shirt protest in the gallery