Matt Salusbury is weighed in the balance and found not witching 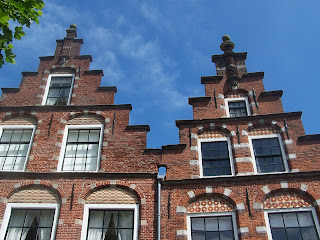 
THE HISTORIC market town of Oudewater lies in the official ‘Green Heart’ of the crowded Netherlands, a green buffer zone that prevents the cities of Amsterdam, Utrecht and Rotterdam reaching out to form one huge Tokyo-style conurbation. Oudewater is a 50-minute bus ride from local provincial capital Utrecht, past the occasional windmill and car showroom and along neat and tidy maize fields and well-kept pastures grazed by enormous cows. Dutch agriculture is a very orderly affair indeed.

You can walk through charming little Oudewater, with the narrow river Ijssel running through the middle of it, in a few minutes. It has waterfront brick houses dating from Holland’s 17th century ‘Golden Age,’ with gables and staring ornamental heads above the door. Subsidence over the years has made some of the houses lean forward at eccentric angles. Like many Medieval Dutch market towns, Oudewater still has its old waag, its weighing house, where weights and measures were officially set. In an agricultural economy based on commodities sold by weight, the weighing house would have been one of the town’s most important institutions. Oudewater’s weighing house is an unassuming little two-storey stone building on the waterfront, on the corner of Leeuwingen Street. But Oudewater’s weighing house is world famous as the Heksenwaag, the ‘Witch Weigher,’ the place where desperate people accused of witchcraft came to from as far away as Germany and even Hungary to be officially weighed to determine whether or not they were witches.

The Heksenwaag still weighs people to check whether they are witches, on an industrial scale. When I visited, the salaried Weighing Master (in fact a weighing mistress) was taking a well-earned day off, and volunteer Maaike den Boer was interrogating and weighing day-tripping families at the rate of about one every three minutes. Her volunteer colleague, Jaap van der Laan – also the Heksenwaag’s Spanish interpreter – somehow found time between weigh-ins and signing visitors’ certificates to tell me the Witch Weigher has around 70 punters a day stepping onto its scales in the summer high season, and Jaap estimated that their all-time record is close to 2000 in a week, including all the school trips, parties and weddings.

They still use the 500-year old wooden scales, all original except for the ropes. August sunlight poured in through the high windows at the top of the weighing chamber, which is a large room with a high ceiling, with an old iron balance from which thick ropes suspend two plain, square wooden platforms big enough to comfortably accommodate one person. The platforms hang just above the floor – I somehow managed to get my size 11 boot wedged fast between the floor and the scale. 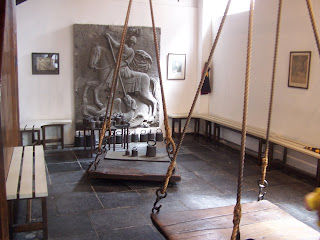 The Heksenwaag's witch-weighing scales, all original apart from the ropes


The witch weighing procedure is as follows: you stand on one of the scales, while the volunteer interrogates you about your personal habits – cooking with herbs, a love of walking in the woods, and a preference for mushrooms are all suspicious signs. Then there’s the question about whether you’ve ever eaten an egg that’s been brooded on by a snake. Tip: answer ‘no’ to this one, a ‘yes; answer is apparently a dead giveaway. The interrogation complete, the inquisitor then loads some big old cast iron weights on the other scale. You need to weigh a minimum of 100 pounds to clear the witch-test (the weights have actually gone metric), but there are complicated adjustments for your height, build and age. They’re vague about this formula, but when I was there, everyone was declared of ‘normal body weight for a human’– even the girl who I though had rather blown her chances by putting on the tall fancy dress witch’s hat and clutching the broomstick she’d found lying on a nearby bench. 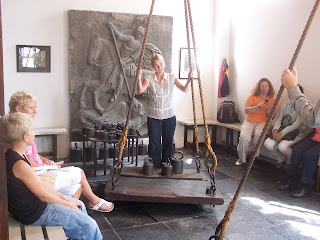 
On payment of an extra €I, I walked away with a certificate in Dutch with 16th century spelling. While the certificate didn’t explicitly state that I wasn’t a witch, it did confirm that I had a normal weight for a human of my ‘bodily proportions’, and it bore the stamp of the Town Council of Oudewater. (English versions are available too.) The current Queen Beatrix of the Netherlands was weighed back in April 1952, and monarchists will be glad to hear that a constitutional crisis was no doubt averted by the confirmation that she was not a witch either.

We can all laugh today at this Monty Python and the Holy Grail-type tourist attraction – the film features a distinctly dodgy-looking witch weighing in which the accused was declared a witch after she was found to s weigh exactly the same as a duck – but witch weighing once a deadly serious business. Witches were thought to be supernaturally lightweight, which is why they had the power of flight. Desperate witchcraft suspects – often accused because of family feuds, land disputes or anonymous letters in the local mayor’s letterbox, came from far and wide to get a certificaat from Oudewater’s Heksenwaag. Its reputation was enough to prove beyond doubt they were too heavy to be a witch, thereby saving them from the stake. Holland’s last mass witch trial was in the southern town of Roermond in 1613, in which at least 40 condemned were burnt at the stake, in a witch panic that may have been a manifestation of the contemporary Catholic counter-reformation. An unusually high proportion of convicted Dutch witches in the 16th century were children – often alleged to have caused the milk of nursing mothers or cows to dry up.

The Seven Provinces of the Netherlands (the union of the majority Protestant provinces to the north) banned the death penalty for witchcraft in 1614, but other sanctions such as exile remained, and witch trials continued in the Catholic south. Dutch Protestant spiritual leaders continued to rail against witches long after the Reformation, and curiously, ultra-Protestant Holland continued to force feed Holy Water mixed with the wax of Easter candles to suspect witches, which was supposed to make them to reveal their true form. Two Dutch sceptics were significant in undermining belief in witchcraft, Dr Johann Weyer dismissed most witchcraft accusations as female hysteria, but believed there were some male witches. His work influenced the Scottish King James VI (later James I of England) and his witchcraft-sceptic book Daemonologie (1597). The Dutch Protestant minister Balthasar Bekker’s bestselling four-volume De Betoverde Weereld (The Betwitched World, 1693) concluded that the world had no demons or witches, and that these were the products of ‘heathen’ pre-Christian superstition. He didn’t completely rule out the existence of the Devil, but the Church authorities concluded that doubting the existence of the Devil would lead inevitably to questioning whether there was a God either, and he was declared a heretic and fled into exile in Sweden.

Did the town fathers of Oudewater believe in witches? Jaap told me that original certificates issued by Oudewater witch weighers are in the Province of Utrecht archives, and they’re accompanied by long and chilling dispositions of the trials and the circumstances of the witch weigh-ins. Some of the defendants who were recorded as non-witches in Oudewater were strikingly lightweight and thin, according to these records. It may be that Oudewater’s Weighing Masters, having earned a reputation for integrity in weights and measures, quietly used their power to save the lives of hundreds of people charged with a crime whose very existence they doubted.

Any why Oudewater? The apocryphal story goes that the 14th century Hapsburg Emperor Charles V, when the region was part of the Spanish Netherlands, was travelling in the area and sat in on a witch trail in the nearby town of Polsbroek. The local court recorded a supernaturally low weight for the accused woman, which the Emperor found hard to believe. Oudewater had a reputation locally for ‘correct’ weights and measures, so the accused was taken to Oudewater to be weighed, where the Weighing Master ruled that she weighed comfortably over 100 pounds, and she was freed. (Could Charles V have been quietly witchcraft sceptic too?) Oudewater’s Weighing Master also refused the ‘gold ducats’ the emperor offered for his services. Impressed by his integrity, the Emperor granted Oudewater’s Weighing Master an exclusive permit to weigh suspected witches. But all the surviving Heksenwaag certificates date from much later, the earliest extant ones are from the early 17th century, while what appears to be the last serious certificate declaring the bearer to have a non-paranormal human body weight dates from 1733, many years after the European witch panics are supposed to have subsided. Current Weighing Master Dr Jeanette Blake said she couldn’t be certain about the date of the last genuine Oudewater certificate, because ‘they were hectic times.’

There’s an extensive bilingual Dutch and English display on the history of Dutch witchcraft in the Heksenwaag’s attic, along with audiovisual presentations, an early edition of De Betoverde Wereld, and some reconstructed ‘witch rings’ – clumps of feathers that were supposed to have magically formed into rings, found inside the pillows of witches. Witch rings provided enough evidence to get you burnt at the stake following a 15th century witch trial, typically of ten minutes’ duration.


The Heksenwaag is open every day from March to the end of September, 10am-5.30, admission is €4.50, excluding certificate of weighing. The Connexxion bus service 180 to Oudewater runs hourly from outside Utrecht Central Station, and more frequently from Gouda Central Station. Dutch Railways have discount advance deals on the Eurostar from London to any station in Holland.