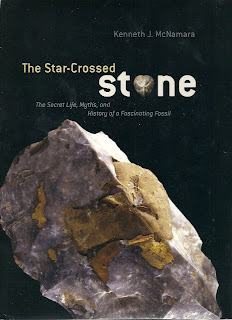 The Star Crossed Stone – The Secret Life, Myths and History of a Fascinating Fossil

Even before they were recognisable humans, back in the days of Homo heidelbergensis and H. erectus, people collected fossil sea urchins, took them with them to places where such fossils didn’t naturally occur, and were buried with them.

The current world record-holder for fossil sea urchins found in a single grave is at least 147 fossil sea urchins, and possibly as many as 200, arranged in a ring around “Maud,” a Neolithic woman unearthed in Dunstable Downs in1887. Roughly contemporary with “Maud” is a specimen of Echinolampus africanus – you guessed it, a fossil species of sea urchin – recovered from the tomb of the architect Kha in ancient Egypt’s Heliopolis, carved with an inscription from around 2000 BCE identifying the fossil as “found in the south part of quarry at Sodpu by Tja-Nefer”. McNamara suggests the quarry (possibly in Sinai, and dedicated to a god associated with several star constellations) could have been known for its “star stones.”

A chronologically more recent sea urchin burial featured one clasped in the cold, dead hand of a Saxon woman buried in Bury St Edmunds. Some French barrows from Neolithic times to the Iron Age seem to have been built around fossil sea urchins and nothing else.

Why? The five-pointed star with a hole in the centre, unique in nature to echinoderms (urchins and starfish,) is the only natural example of so many axis of symmetry. Our ancestors started collecting fossil urchins around the time their brains were first beginning to grasp concepts like symmetry, and making leaps into expressions of abstract ideas and “art”. The fossil sea urchin’s mysterious symmetry may have been humankind’s first-ever sacred geometry.

Urchins were modified by early humans – chipped out to take away the matrix around the star, or drilled to make into pendants or necklaces. Axes and scrapers were made from the very earliest days of tool-making from flint rocks with little fossil urchins embedded in it. These were carefully centred on the tool, and sometimes used as a grip.

Once you’ve revealing the fascinating fact that we’ve been collecting fossil sea urchins since before the dawn of humankind, there’s only so much you can say on the subject. McNamara says it over and over, padded out with too much atmospheric detail. While it’s nice to have some flavour of the conditions in which archaeological discoveries were made, the scene-setting of an imagined cold and frosty morning experienced by an archaeologist in 1911 in the South Downs is too much. As are McNamara’s own reminiscences of a childhood spent collecting Brooke Bond Tea cards.

But just when you want him to get to the point, McNamara shines with a mercifully fast-paced potted history of palaeontology, including proto-fortean martyr Bernard Pallisey, who “took a great delight in thumbing his nose” at the “learned writers of the time.” Pallisey announced that fossils were not the results of the Earth’s “plastic virtue” that was supposed to spontaneously produce simulacra of natural forms, but petrified animals. For his pains he died imprisoned in the Bastille.

Other highlights are epic narratives of complex ancient Egyptian cosmology and the fall and rebirth of the gods of Asgard, and where fossil urchins fit into these belief systems. (To the Vikings, fossil urchins were “thunderstones”.)

McNamara relates how sea urchins increasingly became less an object to accompany the dead on into the afterlife and an amulet of good luck or protection for the living, right up to 1929, when folklorist Herbert Toms photographed the collections of urchins that were then common on windowsills across Sussex.

The bibliography, footnotes and index are excellent.

Our business is located in London and we are a trusted local business who prides themselves on the quality of the work that we provide. So much so that a great deal of our work is solely through personal recommendations. We have worked on numerous buildings throughout the UK located on Northumberland Avenue, Kings Cross Road and participated in multiple repairs, restoration and cleaning work on churches, domestic properties and prestigious buildings used for the popular television program Dragons Den.