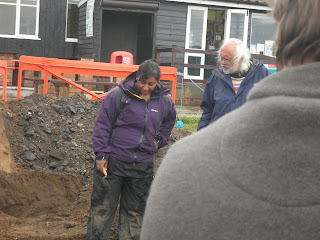 Channel 4's Time Team, which goes out a week on Sunday (Sunday 5 February 2012) is from the village of Dunwich in Suffolk, formerly England's third biggest city in the Middle Ages before it started falling into the sea.

The excavation, in a very rainy week in June last year, was in the grounds of the ruined Greyfriars Monastery, English Hertiage's most threatened site - thry expect to lose it to the sea in the next 50 years - and in the car park in front of the Flora Tea Rooms at the beach. Locals in the know were puzzled by the choice of Greyfriars, regarded by many as "archeologically barren", with the last dig in the 1990s believed to have dug up everything there still was to dig up. There were last minute doubts as to whether the Greyfriars dig would go ahead at all.

The dig at the Flora Tea Rooms car park site involved a long, thin trench on the edge of the car park up against the recycling bins and one of the last remaining World War Two pill boxes (the sea has already claimed most of these) and a couple of small trenches right outside the Tea Rooms in front of the tables, avoiding where they thought power, water and gas cables would be. 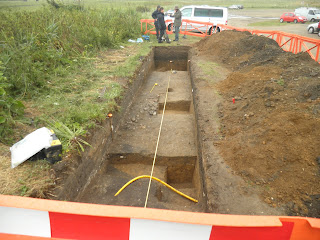 The Flora Tea Rooms dig was looking for signs of Maison Dieu, a charitable hospital run by a religious order to serve the poor of the then city of Dunwich. There's still at tiny Maision Dieu Hill on the beach, the "hill" is now a patch of eroded ground with a fisherman's shed on it, but it's crumbled away so much the shed's not safe to use anymore.

The village Reading Room served as the HQ, with lots of maps. There are plenty of Medieval surveys of Dunwich. It's in the Domesday Book, with a staggering 15 Frenchmen recorded there within two decades of the Norman Conquest, and a King's Commission was despatched in 1287 to discover why the city's considerable tax revenues had suddenly dried up. (A huge storm had blown down a lot of houses and blocked the harbour with shingle, ending the port's commercial viability, it turned out.) Maps from the 16th century onwards record the ruins in detail.

There was much excitement when Time Team (Wessex Archeology Service, who have a commercial arm, and Suffolk Archeology Service) dug up a jug handle from one of the Flora Tea Room trenches, characteristic of a particular style of Provencal pottery.

Of Maison Dieu itself nothing was found, except that fragments of "posh" ceiling tile, floor tile and dressed Caen stone from Normandy - pulled out of the rubble packing the trench. If these were bits of Maison Dieu, they would have been recycled Maision Dieu rubble used as hardcore for the foundations of a later building on the site.

Meanwhile, up at Greyfrairs, an extraordinary amount of time was apparently spent digging to establish and then stake out exactly where the 1990s dig had been, which seemed an extraordinary boring pursuit. The 1990s dig had resulted in resentment locally, because the finds had apparently been locked away in storage in the Ipswich Museum and never seen the light of day. Dunwich has its own museum (my parents are volunteers in the weekend) which recently got a security upgrade for its exhibition of seals on loan from the British Museum, so there was already lobbying for any Time Team finds to go on display in the Dunwich Museum. 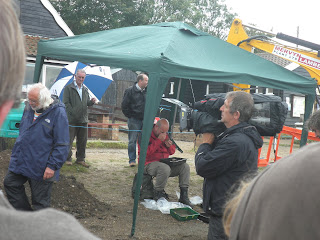 On the edge of the Greyfriars site, close to the cliffside wall, there were JCB diggers at work and one archeologist was out in the pouring rain passing a metal detector over the piles of earth they'd thrown up. It was the final day of the dig before the clear-up, and it wasn't looking good. The Dunwich defences, mentioned in chronicles that praised the bravery of the men of Dunwich who withstood a siege by the Earl of Leicester in 1173, was eluding the Time Team.

Soon afterwards, though, I heard that in the final phase of the dig, the Team had found the Dunwich defences - much bigger and much older than anyone had thought. The ditch went down almost five meters, which suggests a pallisade or wall of about the same height, and it has Saxon pottery shards at the bottom.
All these were initial findings, as related to me at the time of the dig, or soon afterwards. We'll have to wait 'till Saturday week's Time Team broadcast to learn of their final conclusions. 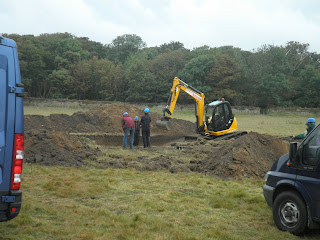 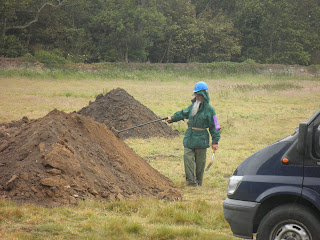 Matt - Very interesting, thanks. I read this when you posted it last week, but I've just read it again after watching the programme. I've always been a huge fan of Time Team, because of what you can learn from it about British history in general, although at the same time I realise you need to take the specific theories and "discoveries" with a large pinch of salt because you can't expect them to barge in on someone else's home turf and do real archaeology in three days. So it's really interesting to get your perspective on their work in your metaphorical back yard.