Dino-art: The Art of Drawing Dinosaurs

The artists correctly predicted feathered dinosaurs back in the 1980s and 1990s - in the teeth of opposition from "ultra-conservative paleaontologists" - and guess who turned out to be right? 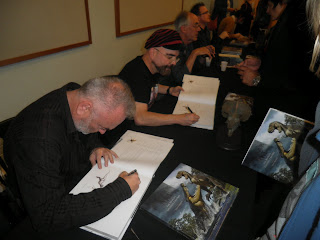 Mass signing with high-speed dino-drawings. Steve White is on the left, Luis Rey is next to him.


Steve White and Darren Naish presented a talk at the launch of the book Dinosaur Art: the world's greatest paleoart - which Steve White edited - at the Natural History Museum in September. This is a very beautiful coffee-table book on the subject, and surprisingly good value. The other surprise was the publisher - Titan Books - best known for comic anthologies such as Judge Dredd and other 2000AD strips. This is as far as I'm aware their first hardback coffee-table art book.

Let it never be said that "paleos" (paleontologists) are dull - this lot were a lot of fun, Steve White in particularly had got a big following of his rather glamorous friends onto the "guestie." Many had smuggled drinks and plastic cups into the auditorium with them, and there was even a "wine fairy" circulating unofficially during the interval, I was told she was the one to ask about red wine. 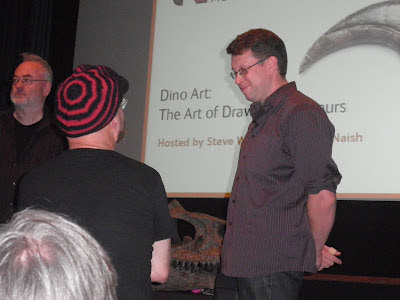 Also in the audience were several mother-and-son teams, the sons in their school uniform. They sought advice from the professionals in the break on how to launch their paleo-art careers. Check-out Deviant Art, and allow other users of the site to critique you on it, was their advice. 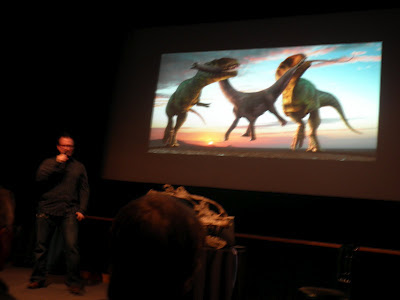 Paleo-artist Bob Nicholls says it isn't that much harder to make a living as a paleo-artist than in any other branch of illustration - but making a living an any kind of illustrator is hard enough anyway. His illustration of two big theropods running at a sauropod (the long-necked one) with such force that they could lift it off the ground is based on "controversial physics.

Bob Nicholls has depicted a lot of Mesozoic marine reptiles (while they were contemporary, they're NOT dinosaurs!) He does a lot of research before starting work, including looking at the original fossils if he can.

When artwork is commissioned, says Bob, you get a long list with the brief with what should go in it, what species you have to put in the artwork, "the more species you put in, the harder it is to keep it realistic."

A lot of his work is murals – "you lose weight up ladders" including the mural at the Rotunda in Scarborough, based on "very few remains." And also for the Leicester Museum, where his mural depicted a Liopleurodon ripping the front flipper off a plesiosaur. This was inspired by a fossil of a finned marine crocodile that had part of its front flipper severed in a similar attack, but the stump healed and it went on swimming with it for the rest of its natural life.

Nicholls builds dinosaurs too, and as a user of Milliput putty in models, I was pleasantly surprised to hear that this material goes in to seal joins between sections of fibreglass-moulded model dino. Being a model-maker as well as a painter is crucial in getting him gigs. Just painting dinos is "like being a greengrocer and only selling turnips", he makes a living purely from paleo-art because he does "multimedia". 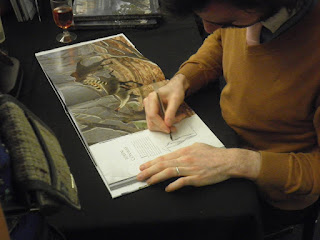 John Conway (shown here) and other artists signed copies with dino-illustrations done at lightning speed. Baryonyx was a popular request. 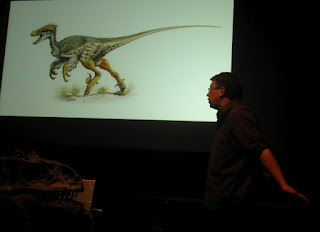 A Deinonychus with "not very flamboyant feathers"

John Conway was inspired by reading Richard Bakker's The Dinosaur Heresies aged 12, which showed him that "scientists could disagree". His art is "getting away from scales and volcanoes" that traditionally appeared in dino-art. His feathered Deinonychus is the opposite of what Naish described as "zombie dinosaurs… with the exact lines of every opening in the skull."

John has swung the pendulum back the other way, to depict animals that showed "less of the skeleton" like many animals around today. He ended up specialising in "feathered theropods, probably just because they're cool." Around 2000 he moved out of actual dino-art as it was "too crowded" and went into pterosaurs (contemporary but NOT dinosaurs).He "sometimes actually measures fossils" and works in Photoshop.

Magnolias – one of the first flowering plants 130 million years ago - often appear in dino-illustrations "tucked into the corner", but Conway sowed us one of his paintings that had a magnolia brought it into the centre, with feathered Alaskan theropods under it.

"This is in China,"said Conway as he showed his painting with some sort of iguanadontian, then he zooms into it using animation software, to show a small, hairy pterosaur, and zooms further to show the fossil wasp it's pursuing, and further still to show a micro-fossil - the detail on the microscopic grains of pollen stuck to the "hairs" on the wasp. Pollen is "practically indestructible", explains Naish, but changes quickly, so it' s a good way of dating a fossil find. 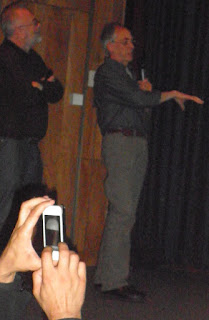 John Sibbick, possibly the world's best known paleo-artist. "Hands up who's still got David Norman's Encyclopeadia of Dinosaurs from the 1980s!" (illustrated by Sibbick,) said Naish. 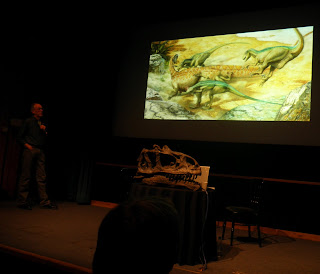 
John Sibbick recently worked on a Scelidosaurus illustration for the Bristol Museum, a very complete specimen that had probably drowned in a flash-flood, with "unexpected scutes on the leg" and goat-like horns at the back of the skull. Naish said that some of the "crazy amount of armour" that's turning up on some individuals of this species could be due to them getting "spikier as they got older," or there could be different species. Sibbick worked very closely with "paleos" on the Bristol assignment, he had "two phone calls" with one of them.

Sibbick hangs on to copyright – "the first of two books I did with David Norman" he had "no copyright" – the book's "still out there, other illustrators out there are adding feathers" to later editions. "I can only earn a living if I keep copyright," says Sibbick. "From day one, keep copyright. You can share copyright" but "I wouldn't have survived 30 years without owning my images."

Sibbick photographs lighting and water effects all the time, but he "can't do digital" as he now suffers from eyestrain. "I like to think it's science more than art" – like Nicholls, he measures specimens before he starts work on illustrating them in life. "I do get bored with dinosaurs sometimes" he confessed, to cries of "Shame!" from a not-too-serious audience. "Somebody had to say it," retorted Sibbick, who regularly goes off and does "Invertebrates, fantasy, general illustration" instead. 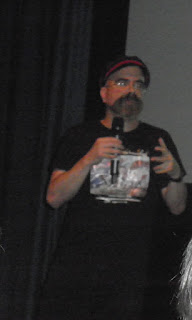 I met Luis Rey in 1998 when his feathered Oviraptor caused a scandal - now they're very mainstream. Now he's chief artist on Dorling Kindersley's latest Encyclopedia of Dinosaurs and you can see the possible influence of Rey in the latest generation of dinosaur toys that depict feathered therapods. 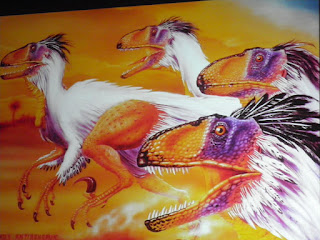 Some typically dayglo acid-coloured Luis Rey theropods. "But all my colours are from nature, he explains


According to paleo-artist Luis Rey, art collector Joseph Lanzendorf created the term "paleo-art" and bought up everything in the genre that was going, but then he "lost interest, sold his collection to a museum, paleo-art was dead." Rey started on "fantasy terror comics" but "wanted to do something for science."

He says he was "blacklisted" in the 1990s, his paintings were considered "too science fiction". Feathered dinosaurs were being depicted in the 1980s and 1990s before the evidence proved them right, says Naish. If anything, those early, controversial attempts at feathered dinosaurs weren't "flamboyant enough", given the bizarre menagerie of smaller feathered theropods that keeps coming out of China.

Quilled dinosaurs?
One of Rey's paintings of a fight between a tyrannosaur and a Triceratops has the latter with short, thick, hedgehog-like quills on its back. Naish notes that early ceratopsids (the group to which Triceratops belonged) had quills in their tails. Naish also notes that pterosaurs had some kind of hair-like fuzz, theropods had something like feathers, could this point to the ancestor of the dinosaurs having had some kind of skin covering?

Naish feels Zallinger and Burian are still beautiful. (Readers aged well over 40 may recall Zdenek Burian's black-and-white postcards in sale at the Natural History Museum, Rudolph Zallinger's much-reproduced murals in Yale's Peabody Museum date from 1941. They both depict bulky, lumbering, sprawled-limbed dinosaurs dragging their tails.) Nicholls said "A lot of what you do gets out of date," says Nicholls. Or as Rey put it, "many of our artworks are part of history."

Conway says digital "makes it easier to update", but also increases the pressure from clients to turn out work faster. While Ruiz uses 3D printing to make basic models which he then draws from different perspectives,Sibbick doesn't "do digital", his eyesight's not good enough these days. He makes plasticene models as the basis for his drawings. 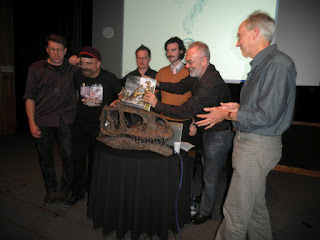 Brilliant, what a fascinating post! How amazing to have all these artists in one room. Odd how they're all men.