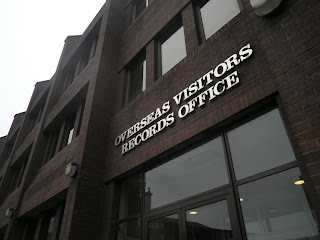 I went down to the Overseas Visitors Records Office in Borough High Street, with a brief from EL Gazette to take some photos of this building - as depressing as possible please. I like to think I did a fairly good job of invoking the general atmosphere of despair that permeates the place, and South London in general. (A rather North Londoncentric view, I admit.) It was even raining lightly in a sort of drizzly way likely to induce a melancholy attitude - yes!

While Britain makes billions out of ripping off international students, and its politicians bang out about how essential the industry is for the economy, this didn't stop them making students queue all night (preferably in the rain) for a Form 3400 so they could register with the police at Overseas Visitors as part of their student visa procedures. If they turned up after 6.30am, they were turned away. And they paid over £30 for the privilege of this treatment, described in a letter from the heads of both King's College London and the LSE to David Cameron as "humiliating."

Unusually, such a depressing state of affairs wasn't the fault of the UKBA, as Overseas Visitors is a Metropolitan Police outfit. Needless to say, students could only register at one office for the whole of London - believed to be the world's biggest student city - and one office in a particularly depressing part of South London at that.

All it took was that one letter, and lo and behold! As of early October, students just have to show up there and pick up a pre-stamped form which they have until the end of 2012 hand in. After that, it's a queue again, but the Overseas Visitors people now claim they're on top of the backlog and waiting times for registering students will be bearable.

When I visited Overseas Visitors there were no queues but it was busy with brisk comings and goings of international students arriving ahead of the new academic year, and peering through the glass I could see it still was definitely a "please take a number" and wait at the service window gig.

There's a short picture story on this in the December 2012 EL Gazette. 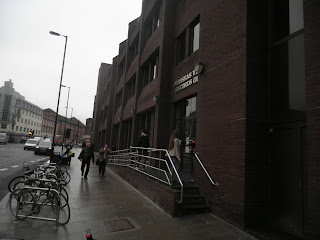 Yes, bit it's still not quite as dispiriting and humiliating as Lunar House in Croydon, Matt,