Haringey Museum of Egyptology for Under £5 faces uncertain future 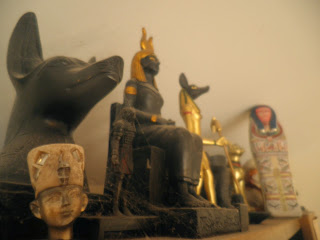 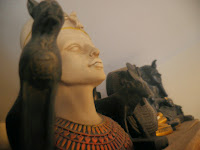 ONE OF THE London Borough of Haringey's lesser-known museums, the Haringey Museum of Egyptology for Under £5, faces an uncertain future as its owner prepares to move out of his flat in St Ann's Ward.

The by-appointment-only Museum has showcased Egyptology gathered from the secondhand shops of the capital over many years, as well as some items that were briefly on special offer in souvenir shops around the British Museum, and from poundshops as far away as Dalston. 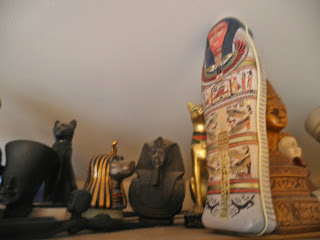 This sarcophagus pencil case, priced at well under £5, is a recent acquisition

Now, as London rents become beyond ludicrous, the collection has to move out of its current location on top of the wardrobe, with a particularly popular attraction - the poundshop Anubis collection - housed in a special annex on top of the chest of drawers, which it shares with the Hall of Globes. (See also here.) 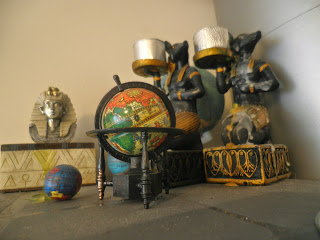 The poundshop Anubis collection was one of the Museum's particularly big draws. Also shown is the Hall of Globes, also acquired cheaply from charity shops

The current collection features numerous takes on Rameses, Nefertiti, sphinxes, several versions of the cat goddess Bast, one particularly cheap-looking plastic representation of the god Horus, and some artefacts that appear to have actually come form modern Egypt, via secondhand shops. The news of the collection's imminent move has put on hold an imminent acquisition from Norway, where the curator's brother assures him that every Norwegian over 40, particularly the slightly flakey ones, went on holiday in Egypt before the revolution, resulting in the charity shops of Oslo being absolutely jammed with Egyptology tat for only a few kronor a piece.

The Museum's collection may now have to go into storage in a probably not very big box. There are negotiations underway aimed at finding the Museum a temporary home in Islington, while other talks are in progress around the possibility of a temporary Suffolk Coastal District Museum of Egyptology for Under £5. A third possibility is a permanent Finsbury Park Museum of Low Priced Egyptology somewhere on the borders of Haringey and Islington. 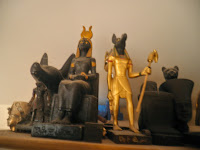 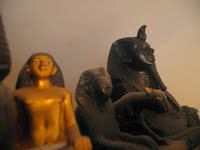 In a previous incarnation at another address in Haringey, the Egyptology Collection was curated by Smute the cat (below), an expert on the 18th and 19th dynasties in particular 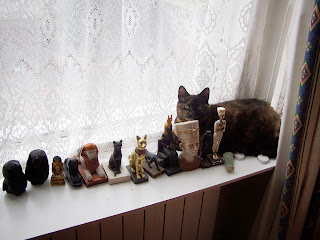 Photos: Copyright Matt Salusbury. Original Egyptian sculptures understood to be out of copyright