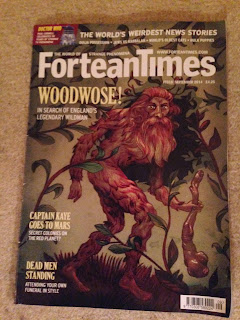 My feature on the woodwoses of Suffolk seems to have pushed the Daleks off the front cover of this month's Fortean Times, having been updgraded from a humble Fortean Traveller piece at the back to the cover story! (That's FT 318, September 2014).

It'll be up on this site as soon as the First British Serial rights have reverted to me, ie when the October issue is out. Update: the woodwose story is here. Fortean Times recently took all the back issue stories of its website, so this is the only place you can (legally) read it.

I note that I'm all over the editorial of this month's FT as well, in which FT claims they "sent" me to my "native" Suffolk. Not strictly correct - I pitched a story to them, and arranged (minimal) expenses for some of the trip and some photocopying at the Suffolk Records Office, and I have been "native" to Suffolk only since I started getting my bank statements sent there, joined the Suffolk Coastal electoral roll and registered as a "temporary resident" with the doctor's surgery there back in May. (Suffolk Coastal's MP has still not replied to my letter on changes to copyright law, which I sent her in June, please note!)

Here, are a couple of my photos of woodwoses similar to the ones in the Fortean Times feature. (They are of woodwoses whose photos do not feature in the article, from St Bartholemew's Orford (top) and a damaged woodwose at St. Peter's, Theberton (bottom). 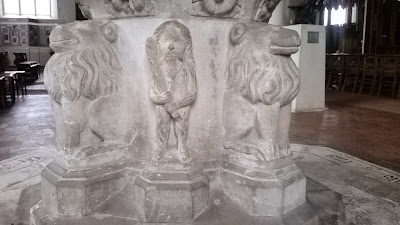 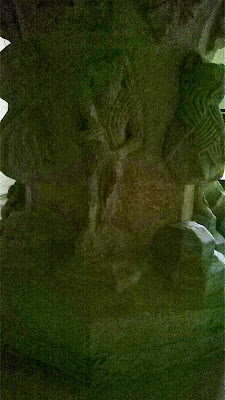 I also get a mention in this month's FT in Karl Shuker's Alien Zoo section, for which I am grateful to Karl. He bigs up my researches into Baron Maurice de Rothschild's tusk "of enigmatic origin", which was the subject of my recent Weird Weekend talk, and which will be the subject of a future Fortean Times forum piece just as soon as I can find a way to describe it all in 800 words. See Dr Karl's recent blog post on his own researches in this area - he's got further than me, and has much better French!

Oh, and I'm in the "clipping credits" too, for sending in a suitably bizarre news headline. If I recall correctly, it was the Guardian's "Ghost ship packed with cannibal rats not likely to crash into UK, say officials."