I recently met Iraq ministry of education officials at British Council "English in Iraq" meeting in London. There were plenty of euphemisms to describe the state of English language teaching in Iraq, and everyone was putting a brave face on a very difficult - and delicate - set of circumstances. A report co-authored by Claudia Civinini and myself for trade magazine EL Gazette is here.

Some of the euphemisms to describe the delicate situation in Iraq that didn't make it into the report (spece did not permit) included:

The internet in most Iraqi classrooms was said to be "partially available."

On the positive side, Basra - Iraq's second city, in the majority Shia South of the country – is now officially as safe as the Kurdistan Regional Government area in the North. Amir Razman, British Council director Iraq, said the Foreign Office advice has changed, the KRG is now "orange... same as Basra." Orange means "advise against all but essential travel" slightly better than red, which is "advise against all travel". Basra's sudden relative safety is a reflection of the KRG being downgraded to less safe, on account of the Islamic State being just down the road.(The KRG enjoyed a more safe rating from the FCO for many years, including when I visited in 2004.) 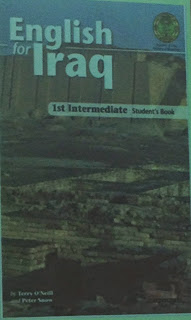 Two UK publishers reported extensive problems with piracy of their English language textbooks (one shown above) in both Iraq - "CSI" (Central and Southern Iraq, the part of Iraq that's not in the Kurdistan Regional Government) - and within the Kurdistan Regional Government education system, which is completely autonomous from Baghdad. More will follow on this in EL Gazette later, but at the moment there is a reluctance to talk about this issue on the record. 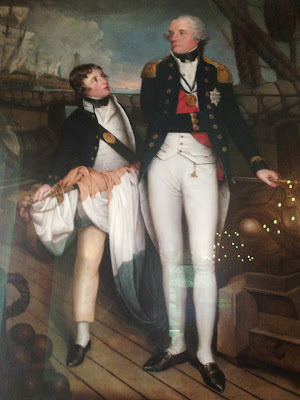 The meeting was in the spectacularly grand surrounding of 10 Carlton House Terrace, about the poshest address you can get in London SW1 (it used to call itself The British Academy). Watching over the meeting was a magnificent portrait (above)by the artist Head depicting Admiral Lord Nelson receiving the French colours after defeating the French fleet at the Battle of the Nile in 1798. We noted that the red, white and blue of the French colours held by (presumably) a French cabin boy appear to have been leached out by the cruel sun of the Eastern Mediterranean.

See also: New rector of Kurdistan university was victor of Battle of Basra (he's since left)