‘Twas the night after Christmas… 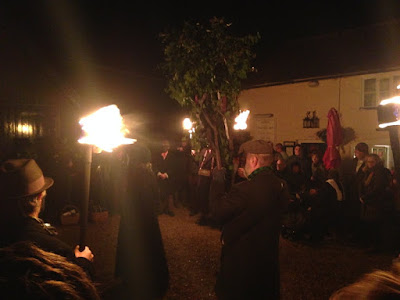 Boxing Day, the day after Christmas, also known as St Stephen’s Day, is named from the “box” (a monetary tip for the past year’s service) traditionally given to the postman, the dustman, the paperboy. It was the day the poor box in the church was opened and distributed, hence the name. (Nothing to do with a pugilistic sport, in case you were wondering.)

But there was one group usually left off the Christmas card lists of respectable folk and who weren’t given a box on St Stephen’s Day. These were agricultural labourers, the lowest of the low. They had no choice but to go in disguise at night and extort some sort of tip by means of what officious railway station announcers call “aggressive begging”. Following a recent revival of a possibly ancient ceremony in a village not far from the Suffolk coast, St Stephen’s Night has become the night of the morris dancers gone bad. In Middleton cum Fordley on Boxing Day, it’s all gone a bit Wicker Man.

On a night illuminated by a Suffolk moon so bright it blinded you to look at it, I was among a crowd of around a hundred punters gathered in some excitement to witness the St Stephen’s Night ritual that is the Cutty Wren.

Originally, young agricultural workers would scour the local hedges and furze (an old English word for gorse bushes, still in use in East Anglian place names) in search of a wren. Sometimes the wren would be put in a cage among a thicket of foliage on the end of a pole. More often they’d kill the wren and nail it to its pole among its foliage. Wrens spend much of the time close to the ground in hedges, so this simulated its habitat.

The wren on the pole would be paraded around the village at the head of a troop of blacked-up molly dancers, molly dance being morris dancing’s evil twin from the East of England.

The East of England “molly” variant takes its name from the “molly”, one of the lead pair of the “side” – the team. The side performing the Cutty Wren at Middleton go by the suitably chilling name of Old Glory. The molly is a usually a terrifying-looking, blacked up older man in drag, wearing a poor Victorian woman’s long dress and bonnet, with some distinctly male boots to match. Forget embarrassing Black and White Minstrel Show blackface, molly dancers blacked up look more like SAS commandos ready for a murderous night mission. The molly’s usually the orchestrator of clandestine molly mischief.

The molly dancers’ sinister look is emphasised by the fact that during their whole grim performance, the molly dancers never, ever smile. Members of the side who aren’t in a particular dance stand right in front of the audience starting straight ahead but avoiding eye contact, like a line of cops on “public order” duty. One member of Old Glory told me that in days of “pre-modern dentistry”, you’d avoided smiling at all costs during “muggings” (begging expeditions) as a smile was “like a bar-code”, the gaps in your teeth allowed your landlord or the vicar to identify you. Another feature of Old Glory that sets them apart from the more genteel morris teams of a traditional English summer is that Old Glory only ever dance on winter nights. 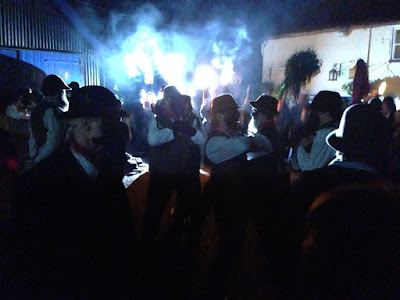 The Cutty Wren in progress - molly dancers of the Old Glory side perform in the moonlight, under a "no flash photography, lanterns only" policy. Someone's broken the no flash rule here!

How old is the Cutty Wren? “Cutty” is believed to be an ancient word of Celtic origin. The famous tea clipper ship the Cutty Sark at Greenwich is named after the way too short – “cutty” is “short” or small”– child’s linen undergarment or “sark” worn by Nannie Dee, the witch in Robert Burn’s poem Tam ‘o Shanter who appears on the ship’s figurehead. Some trace the Cutty Wren ritual back to the Iron Age (possibly mythical) “Year King” who ruled for a year and who was sacrificed – probably not literally – at the end of each year to renew the crops.

There’s a whole catalogue of Cutty Wren songs and poems, the English one is thought to date back to at the 14th century or possibly much earlier. The oldest written version is a 17th century Scots song and there is an (English-language) Irish Cutty Wren ballad and versions in Welsh, Breton and Manx. Before the Middleton Cutty Wren’s opening dance, the man in blackface in a flat cap carrying the wren on the pole shouts out the best-known Cutty Wren song:

“We’ll hunt the wren!”/Says Jack-of-the-Land/”We’ll hunt the wren!”/Says everyone/The wren, the wren, the king of all birds /On St Stephen's Day was caught in the furze /Although he was little, his power is great /So up with the kettle and down with the plate!” The kettle is a pub tankard, and the plate is the molly dancers’ collecting plate, although it’s now a box on a strap carried discreetly under the arm of the “box man” who also carries the wren on a pole. He’s extra tall for the purposes of gentle intimidation.

Old Glory’s revived Cutty Wren at Middleton can be traced all the way back to 1993. We seem to be in the middle of a Cutty Wren revival, days before I attended the Middleton Cutty Wren, Poet Laureate Carol Anne Duffy’s new poem The Wren Boys was published in the Guardian, describing lads from the turn of the twentieth century - the glory days of the Cutty Wren tradition – catching a wren and going begging. There’s even an obscure short story from a BBC Worldwide official Doctor Who adventure book, in which the Second Doctor and his assistants Jamie and Victoria land in a suitably atmospheric Middleton on Boxing Day 1906 to find themselves in some sort of terrifying scenario. (FOOTNOTE: “The Cutty Wren”, Doctor Who Short Trips: The Ghosts of Christmas, BBC Worldwide, London 2008.)

But going back (or forward) to our 2015 Middleton Cutty Wren, the absence of small children was noticeable. They’d been locked up to stop them getting nightmares at the sight of the terrifying Old Glory side on their silent, torch lit funeral procession, interrupted only by the occasion single, solemn drumbeat. (When I enquired about the Cutty Wren at The Old Bell pub earlier, one of the regulars described the forthcoming “frightening the children” procession.) Some dogs shut indoors saw the silent blackface march of the torch-wielding molly side pass by their living room window and went nuts.

The male molly side were scary enough – the dancer from the lead pair who wasn’t in drag wore a suitably gothic horror top hat, as did the deliberately non-entertaining master of ceremonies. But the all-girl band that accompanied them (molly “orchestras” were traditionally all-female, and the women used to teach the dance steps) was just bizarre. They were blacked up and wore long black trench coats, with black veils around their broad-brimmed hats, which were decked with generous mounds of ivy and other foliage. This gave them the appearance of an evil chorus line from The Muppet Show, and the orchestra played from deep in the shadows, adding to their sinister mystery.

After the short procession through the village, the molly dancers and punters formed up in the car park in front of The Old Bell pub, which has a noisy gravel surface for some of the dances that involve deliberate stomping. “Stomping the Ground” is the title of one of the dances. Others include “Nelson’s Revenge”, and then there’s “The Buck” which realistically simulates rutting stags with horns locked in combat, complete with shouts of “Ooh!” that mimic the bellow of a red deer stag. The deer rut throughout October, just down the road on the Westleton Heath RSPB reserve, is an annual tourist attraction.

“The Buck” is, of course, another excuse to unnerve people by simulating a fight. The dances are purposely graceless, jerky and plodding. A lot of dance moves involve burly blokes grappling each other, because this whole performance is really a subtle show of physical force and intimidation designed to get the vicar, the squire, the landlord and the respectable shopkeeper to put some money in the box you thrust towards them so they can be on their way.

The master or ceremonies in his undertaker’ s top hat introduces the first dance by explaining that “We are but poor ploughboys… under my arm I have a small box.” These days, though, proceeds of the Cutty Wren go to charity.

The eight-strong female orchestra hidden in the shadows has a few “proper” instruments - tin whistles, accordions and a kettle drum, but the percussion section plays the sort of deliberately shambolic equipment you’d expect the families of “poor ploughboys” to come up with – a skiffle, washboards and an Australian-style “lager pole” – a broom handle with tin lager bottle tops loosely nailed to it, which jangles when struck on the ground.

When the Cutty Wren’s “wick lanterns only, no flash photography” convention is occasionally broken, the Old Glory dance team are fleetingly illuminated, revealed as men in late middle age in blackface, wearing the waistcoats and neckerchiefs of farm labourers circa 1900, with some horse brasses with the wren design from the old pre-decimal farthing coins. In their white shirtsleeves and trilby hats, they molly dancers look more like one of the “ultraviolence” gangs escaped from A Clockwork Orange than Wicker Man. 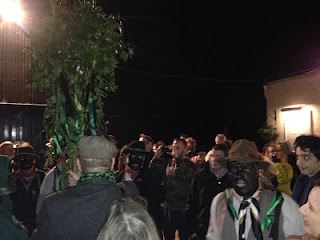 A final circle dance with the crowd as The Cutty Wren comes to an end. Molly dance side members in blackface, the wren is on a pole surrounded by foliage

The man carrying the Cutty Wren on its pole tells the story of how Britain’s migratory birds chose a King via a competition to see who could fly the highest. When the golden eagle showed up, all the birds dropped out, leaving only the wren, who’d just made it through the scrum of onlookers by accident. The wren won by riding on the back of the eagle, and became the Friend of the Poor, symbol of resourcefulness triumphing over power. The retelling including some very modern references to bird focus groups and the Home Office granting Leave to Remain to bird migrants.

The Cutty Wren is part of an East Anglian revival of morbid morris dancing. Old Glory sometimes team up with the local Rendham Mummers, whose performances include the play Death Comes A Knocking. And also from Suffolk Coastal District comes the blackface mixed morris side Pretty Grim, inspired by the dances of the Welsh border but with a goth-punk vibe. Its name comes from the fact that “the boys are pretty and the girls are grim.”

(More photos and links to be added shortly)