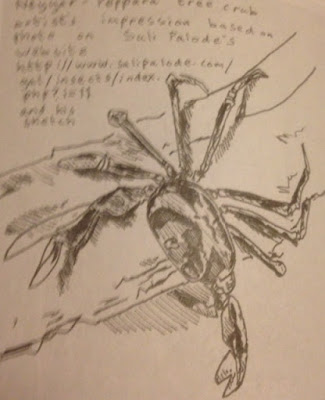 Artist's impression of the tree crab now known as Kani maranjandu, back in 2011 when it was still a mystery animal. From Pygmy Elephants (Matt Salusbury, CFZ Press 2013)

The "mystery" tree crab described to me by a local eyewitness I interviewed over a decade ago turns out to be a real animal after all, and has been formally scientifically described.

Back in 2011 I was in Kerala, on the trail of a cryptid (unknown animal), the kallaana or pygmy elephant, said to be a type of Asian elephant that reached only five feet (1.5m) in height at the shoulder in adulthood. (See my report on my Kerala expedition here.)

As often happens in the hunt for mystery animals, the search for one cryptid throws up reports of another. I talked to award-winning wildlife photographer Sali Palode, who said the local Kani tribal people had shown him the mystery tree crab and he'd been able to photograph it. There were then photos by Sali of the mystery tree crab on his website (in the "insects" section!)

Sali in my interview – with his agent, Badhan Madhavan, translating from English to Malayalam – told how Kani elder Kamalsanan had led him to the tree crabs, and how the Kani used parts of the tree crab as a medicine for ear complaints. The Kani have an excellent reputation for traditional medicine. The receive royalties for medicines made from the leaves of the "jeevani" shrub, which grows in their lands, which turns out to me a miracle wonder drug stimulant.

Sali's description – of a quite large crab with long legs, purple in colour and with yellow front claws – turns out to have been entirely accurate. He also described how they moved very fast among the trees – as his website says, "the speed with which this crab scrambles up a tree is phenomenal."

This description of the animal's behaviour led some of the arthropod experts to whom I spoke to speculate that Sali was confusing it with yet another local cryptid – a large arboreal "tarantula-type spider" that remains as yet undescribed by science. Carl Marshall, an arthropod expert, told me he thought from its description this could be a Peocilatheria tarantula.

Sir David Attenborough was contacted by my colleague Richard Muirhead to ask him his opinion about the possibility of tree crabs living in the Keralan forests. He didn't have a problem with the idea, saying he'd found crabs living in the forests of Madagascar, saying "there is nothing strange about finding crabs in the Madagascan forests – or indeed in Kerala."

Sali described the crabs as living in "gaps" in trees, which turned out to be accurate too. Crabs need water to breed – this they do in hollows in the trees where rainwater gathers.

Recently, a survey of freshwater crabs in the region took place, begun in 2014 under the leadership of Dr Biju Kumar. The surveyors befriended the Kani, who led them to the arboreal tree crabs, known in the Kani language as "maranjandu." A male and a female specimen were captured, leading to the discovery that it was not just a new species of crab, but a who new genus. It's been formally given the Latin name Kani maranjandu. (See the write-up in
Phys.Org here. ) One of the photos of the tree crabs in the report is by Sali Palode.

The description of the Kani and my witness Sali Palode turns out to be entirely accurate. This phenomenon is well known in cryptozoology circles (cryptozoology being the study of as yet unknown animals) – an animal of often "ethno-known" – known by a local ethnic community but disregarded by mainstream science, often regarded as a local superstition, until it turns out to be absolutely true. The okapi and the gorilla were both once "ethno-known" mystery animals before the descriptions by local people were confirmed.

The tree crabs were discovered in Kottor Reserve Forest, which is not far from the Keralan capital, Trivandrum and has an elephant rescue centre. But I predict that there's another population of the tree crabs awaiting discovery in another nature reserve nearby, the Neyyar Peppara reserve, which is where Sali saw and photographed them.

I went into Neyyar Peppara with Sali and Kani guide Mallan Kani in April 2011, having been given permission by Wildlife Warden Sharma of the Kerala Forest Department.

We didn't encounter any tree crabs, tarantulas or pygmy elephants, but we did have an encounter with a stampeding herd of guar – wild bison. We briefly stopped off at Mallan's house – the Kani are allowed to live in the forest reserve – where I saw some of the edible plants he had growing in his forest garden, including three kinds of ginger – ginger, wild ginger and "Bali ginger", arrowroot for making biscuits, cashews and mangos.

Access to the Kani is usually restricted, so I was granted to rare privilege of being allowed to go into their reserve. At the end of the day we stopped for a late lunch of fresh coconuts in one of the Kani settlements – the Kani whose house we stopped at went up a tree to cut coconuts for us.

There are 13 Kani hamlets in the forests of the Neyyar Peppara Wildlife sanctuary, these are usually of between 10 and 20 families. The last census, in 2002, put the Kani population of the south Indian state of Kerala at 16,000, with another 48 Kani settlements in the neighbouring state of Tamil Nadu. The Kani language is related to Malayalam (the official language of Kerala) with some elements of the Tamil language. There is controversy around whether the Kani language is a dialect of Malayalam or a language in its own right. Their religion is said – by others – to be ancestor worship with elements of Hinduism and Christianity. The name "Kani" just means "people who live in the forest."

The Kani turned out to be entirely right about the tree crabs. I was a bit sceptical about that other "ethno-known" Keralan cryptid, the kallaana pygmy elephant. Experts on elephant ecology told me they thought it likely that these were misidentified young elephants who had "poor body condition" during the dry season and who took on a wrinkled, emaciated appearance that made them look older than they were. But if the Kani are right about the tree crab, perhaps we should take heed of their description of the pygmy elephant and the mystery tree tarantula.

There's another Keralan cryptid – outside the range of the Kani and further north, in the tea plantations of Malabar. This is the pogeyan – a mystery grey-brown coloured leopard without spots. Its name means "the cat that comes and goes with the mist" in the Malayalam language.

You can read about all these Keralan cryptids, and much more, in my book Pygmy Elephants, available here.

Its really an Excellent post. I just stumbled upon your blog and wanted to say that I have really enjoyed reading your blog. Thanks for sharing....

Very nice post here thanks for it I always like and search such topics and everything connected to them.Excellent and very cool idea and the subject at the top of magnificence and I am happy to comment on this topic through which we address the idea of positive re like this.

Nice article for mystery tree crab post.thanks for sharing the article.in the world many mysterious places.