Protest for a fair election at Belarus embassy 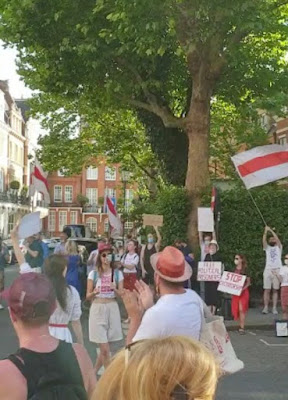 Belarusians living in the UK protested outside their Embassy in London yesterday (25 June) at the start of the Presidential election campaign. With the three most likely opposition candidates still in jail, and reports of intimidation of supporters of opposition candidates attempting to sign their paperwork to stand in elections, few are expecting anything like a free and fair election. One demonstrator told me that most opposition leaders over the past 25 years have been jailed, gone into exile or disappeared.

Candidates need 100,000 signatures to stand in the presidential elections. Supporters were queuing in the streets to add their signatures to their candidacies. One candidate, Sergei Tikhanovski, was detained on 6 May after participating in protests at Belarus's strong ties with Russia. His candidacy was "banned". 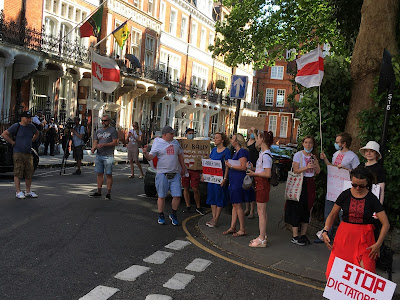 The current president, Aleksander Lukashenko, has been in power for five terms, starting in 1994. He has been the subject of occasional sanctions by the EU and the US over free and fair elections.

A demonstrator told me that while Belarus has always been a "very patient country", the Covid-19 crisis, and the Lukashenko regime's attempt to downplay the impact of the virus, has brought people out on the streets. Doctors who became whistleblowers on the full extent of the Covid crisis have been arrested. There were chants (in English) of "Enough is enough" at the Embassy demo.

There were around 50 demonstrators when I turned up, I heard that after I left numbers went up to 200, with another demo planned for Sunday for those Belarusians living in the UK who couldn't make it into Central London on a workday. There were simultaneous demos at other embassies in Europe.

Some wore traditional white and red Belarus shirts with the traditional embroidered pattern, others had a printed T-shirt version of the same. Others wore "We are the 97 per cent" T-shirts, a reference to two online polls that put support by voting intention of Lukashenko at just 3 per cent. 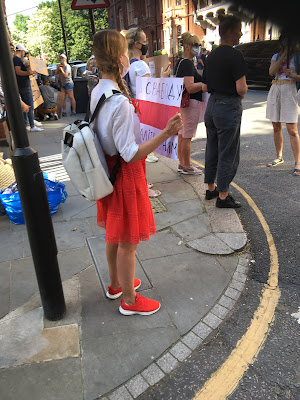 Lukashenko has naturally been gathering signatures for his presidential candidacy, with civil servants reportedly intimidated into signing these. Opinion polls without permission from the Academy of Sciences are now banned in Belarus. 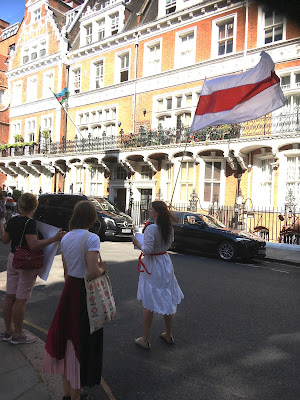 Some demonstrators had brought with the the white, red and white striped "independence" flag of Belarus, in use in 1918 and after the collapse of the Soviet Union in 1991, until its replacement with the current flag in 1995. The current national flag is basically a modified flag of the old Belarusian Soviet Republic with the red star removed.

A protester told me there were embassy staff among the protesters, it wasn't clear whether they were there keeping an eye on protesters. The Embassy curtains were in any event drawn. A Mongolian diplomat from the Mongolian Embassy next door was watching from the roof.


The presidential election is on Sunday 9 August. Expect a strong opposition turn-out at the polling station at the Embassy in London. 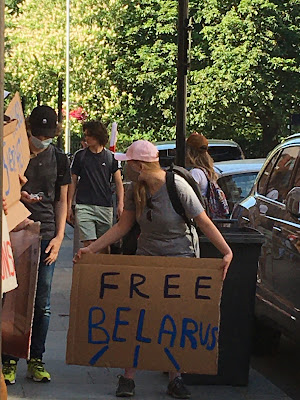 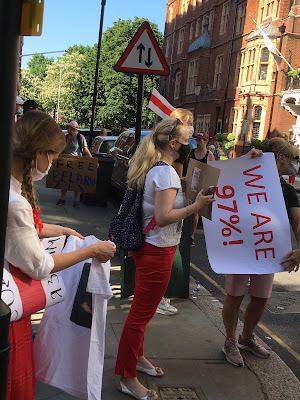