West Suffolk bobcat escaped while being transferred to a zoo, FIOA disclosure reveals

Big cat investigators spend a lot of time out in the wild with trail cameras and the like, but we can get a fairly good idea of what's happening by way of British big cat activity via Freedom of Information Act (FOIA) requests, to the police and to local councils, for example. This FOIA disclosure involves a escaped male bobcat shot and injured in Suffolk, after he was apparently rescued by the RSPCA who passed him on to a rescue centre where he was rehomed.

FOIA disclosures in response to my requests have uncovered the circumstances of the escape. They also hint at a former owner of multiple big cats somewhere in West Suffolk transferring a large number of "Dangerous Wild Animals" out of their ownership in the course of 2020. 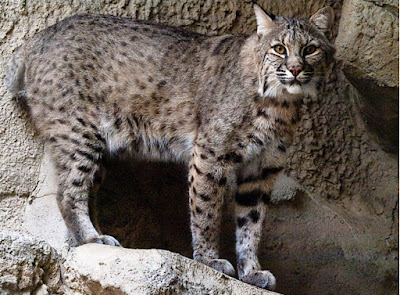 Bobcats (Lynx rufus) are North American wildcats, similar in appearance to Canadian lynxes to which they are closely related (there are known lynx-bobcat hybrids). Bobcats are smaller than lynxes – bobcats can be up to 125cm (49.2 inches) long . They share the lynx’s characteristic of having distinctive tufts on the end of their ears and short tails – the name “bobcat” comes from its short tail, the short tails of rabbits being "bob-tails" in American English.

A Dangerous Wild Animals (DWA) Licence is needed to keep bobcats in the UK – they need an enclosure built to a standard specified in the Act, subject to inspection, which needs to be monitored with CCTV cameras. The owner also needs public liability insurance against damage caused by the animal. Animals have to be microchipped as well.

DWA licences are issued by local authorities, who are also responsible for enforcement of the Dangerous Wild Animals Act is down to local councils. In the case of West Suffolk it’s done through their licensing department. West Suffolk is a recent merger of the two Districts of West Suffolk, which are in turn devolved administrations – Forest Heath and St Edmundsbury – that fall within the boundaries of the county of Suffolk.

Those who keep big cats (in the UK it seems to be overwhelmingly men) are aware that in the UK’s current austerity regime, the ability of cash-strapped local authorities to actually carry out any enforcement. As we will see, West Suffolk took action to seize that bobcat once they’d identified its owner – probably through its microchip which would be linked to his owner’s DWA licence – but once it became clear that the owner was selling or giving away all their big cats (see below), West Suffolk probably decided to let it go, they probably didn’t feel like going through the expense of prosecuting the owner for negligence or for failing to report an escape.

As someone who investigates big cats in Suffolk, I was alerted by one of my many sources to the fact that an injured bobcat had turned up at a vet’s "near Bury" (Bury St Edmunds, West Suffolk). The bobcat had been shot in March 2020 (during full-on Lockdown 1.0) by a farmer who’d lost a lot of chickens to something. They had apparently sought the advice of police, who advised him that the was within his rights to shoot at it to scare it away. I was shown photos of the injured bobcat in his huge pet carrier at the vet’s, also an X-ray showing pellets lodged in his front legs and one of his eyes. (I was shown the photos on the understanding that they were not for publication.)

I was also told that the vet’s assistant had by chance done their internship on a conservation project with Iberian lynxes in Spain, so treating a closely-related bobcat for its injuries was relatively straightforward for the team there. I cannot reveal the identity of the vet, other than to say there are so many vets "near Bury", Suffolk being a very agricultural county, that I can safely use the phrase "vet near Bury" without risk of identifying it.

The story broke shortly after, in an exclusive story in The Sun. This red-top daily is actually getting surprisingly good at covering big cat stories. Under the headline "Big Cat Rampage: Bobcat goes berserk and savages farmer's chickens after escaping owner before being shot and captured", The Sun of 24 March 2020, the story is online here. It revealed that West Suffolk Council had started in an investigation into the circumstances of the bobcat’s escape. On the basis of this information, I made a FOIA request to West Suffolk.

West Suffolk’s unnamed FOIA Coordinator was kind enough to pass on to me a series of emails, with the names and email addresses redacted in accordance with data protection regulations. Fortunately for me, they’d been a big slack at redacting the job title on some of these emails, a quick look at the RSPCA’s website confirmed that Animal Collection Officer is a job title from within the RSPCA. The injured bobcat had apparently come into the care of the RSPCA who took it to the vet and passed him on to an (unnamed) refuge centre where he was rehomed.

Here is West Suffolk’s correspondence with the RSPCA about the bobcat: 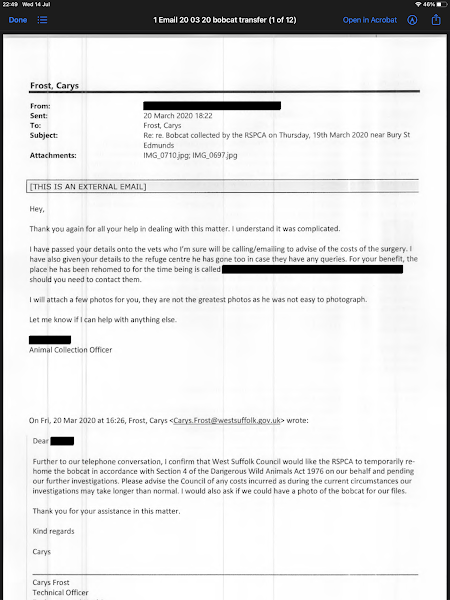 Correspondence between West Suffolk's licensing division and the RSPCA about rehoming a rescued, injured bobcat. 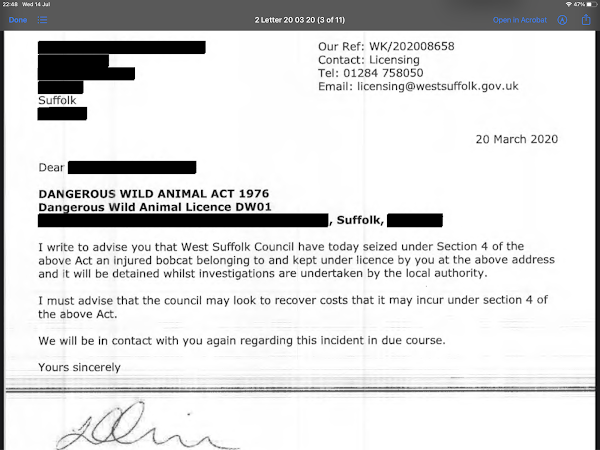 If I have understood the correspondence and the Sun story correctly, while waiting to find out if the bobcat would be claimed, either the RSPCA or the vet seems to have called up their contact who they would ring whenever there was a lynx or bobcat that needed fostering.

West Suffolk’s Service Manager (Environmental Health) wrote to the bobcat’s owner. They advised the owner that the Council that as of 20 March 2020, they "have today seized... an injured bobcat belonging to you and kept under licence by you." The bobcat’s owner soon replied with an apology regarding this "unfortunate escape". (The disclosure confirmed it was the only DWA escape West Suffolk had on record.) 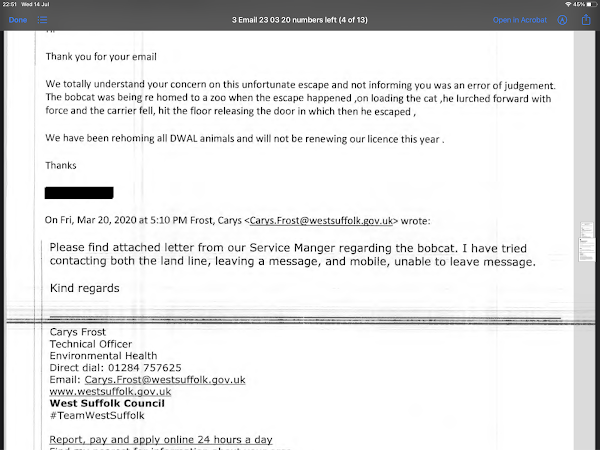 The bobcat's owner apologises for not having reported the escape earlier and admits that the animal had escaped while being transferred into a vehicle to be rehomed to a zoo.

The owner replied with a rather peremptory apology and the briefest of admissions that they had made an “error of judgement” in not reporting the escape of a bobcat. (As well as an error of judgement, it’s also a breach of the law, owners have a duty to report escapes and local authorities have a duty to record these. West Suffolk confirmed to me the bobcat on the loose was the only recorded DWA escape in their jurisdiction to date.

The owner explained, in a scene reminiscent of the opening of the original 1993 Jurassic Park film, that “the bobcat was being homed to a zoo when the escape happened, on loading the cat, he lurched forward with force and the carrier fell, hit the floor releasing the door, in which he then escaped.” The owner went on the say that "we have been rehoming all DWAL animals and will not be renewing our licence this year." 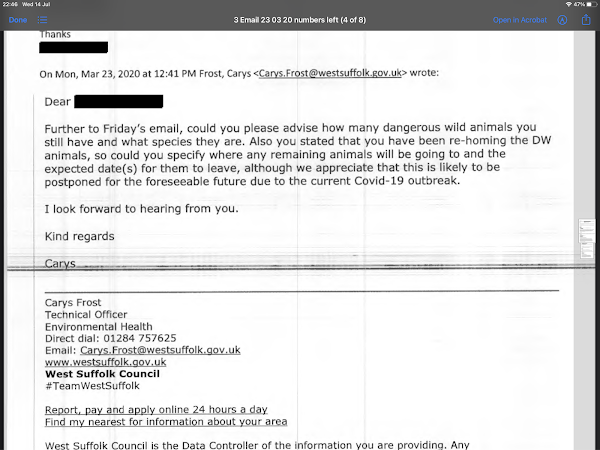 West Suffolk requests from bobcat's owner details of how many Dangerous Wild Animals Act notifiable animals they still have. West Suffolk requests from the bobcat's owner an update on the wildcats that were in their possession.

There’s also correspondence between West Suffolk and another entity – possibly the bobcat’s owner – asking for data on their DWAs. From this it seems that whoever it was whose bobcat escaped near Bury was winding down their big cat keeping operation. They confirmed to West Suffolk that in the year up to May 2020 they’d offloaded two caracals, two bobcats, (plus the one that West Suffolk seized and the RSPCA rehomed), one serval and two jungle cats to at least one third party.) 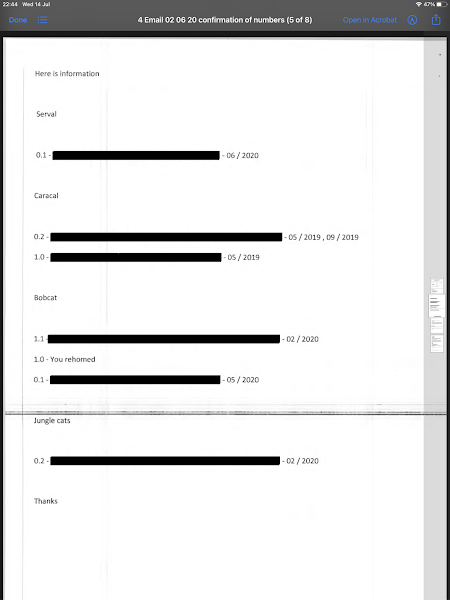 Bobcat's owner provides information on the fate of their wildcats (including the injured bobcat), destinations of these are redacted. 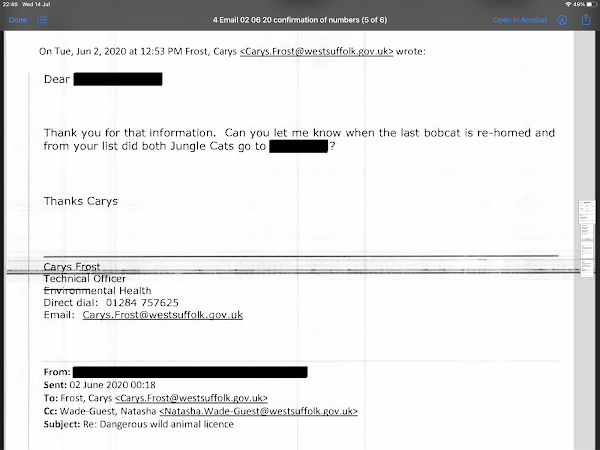 West Suffolk asks the bobcat's owner if the jungle cats have gone to... (redacted).

By June 2020 the owner had confirmed that "all bobcats have been rehomed" (the Council had a list of four bobcats licenced to that individual.) The final email in the FOIA disclosure has the owner anticipating a visit from "licensing" to check that there were no longer being kept on the premises any DWAL animals for which a licence would be needed. 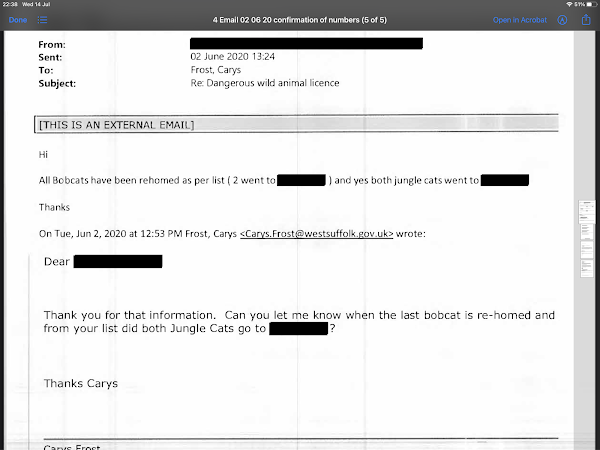 Former owner confirms all bobcats have been rehomed, and confirms that jungle cats have indeed gone to... (redacted). 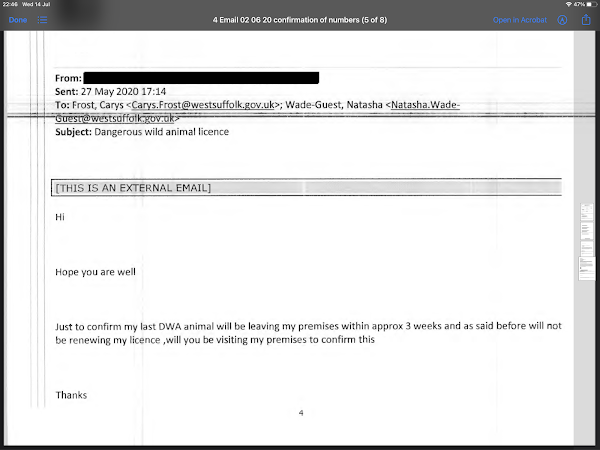 I am reminded of other evidence of there being more lynxes and bobcats than anyone realised in West Suffolk. I have heard accounts of strange screams coming from Thetford Forest, as well lynx sightings in West Suffolk, including one in Red Lodge. Around 2005, people regularly heard such screams around Santon Downham, and there was said to be a "lynx man" locally who "everybody knew" kept lynxes. There are legitimate lynx re-introduction programmes in progress in Europe at the moment – parts of Germany and the Czech Republic are re-introducing lynxes. While a plan for the re-introduction of lynxes into an enclosed area of Thetford Forest (Norfolk-Suffolk border) was rejected, a proposed lynx re-introduction in Aberdeenshire is going ahead. The "lynx man", if he existed, could have been breeding lynxes as part of such a programme, he would obviously want to keep such activities very low-key.

The Press Association’s investigation from 2016 showed that at the time there were Dangerous Wild Animals Act licences for seven lynxes and two bobcats in West Suffolk. These two bobcats would now seem to have been accounted for, one male rehomed by the RSPCA, the female rehomed to (redacted).

An RSPCA official has confirmed to me that "this is one of our jobs and the photos are ours" (the photos of the injured bobcats at the vet’s, as seen in the Sun story. I am in negotiations with the RSPCA about the possibility of getting permission to reproduce the photos.

My source in East Anglian animal rescue told me there are a lot of owners of exotic animals (monkeys, exotic reptiles and big cats in particular) who keep them under the radar and don't bother getting a licence for their animals, so unrecorded big cat ownership and escapes in the country may be more common than official data suggests.