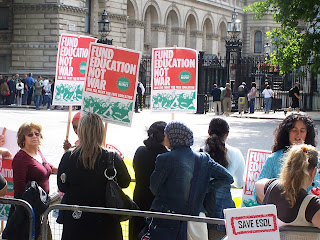 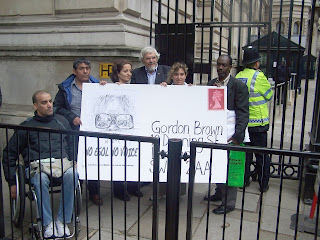 One of the first delegations to be received by brand new Prime Minister Gordon Brown, who started work on Thursday, was a group of students and teachers of ESOL (English for Speakers of Other Languages) on Friday 29 June protesting the introduction of fees for courses and cuts to the sector (See blog entries on ESOL below). The demo opposite parliament and the delegation to Downing Street followed a cursed and ill-fated 'ESOL protest picnic' by ESOL students from London Further Education colleges.
This was originally planned as a march and rally for Saturday 30 June, but this clashed with London Gay Pride, and the idea of lots of veiled Muslim ladies turning up at the end of the Pride parade was not one the organisers wanted to try out. The weather - after a week of floods and severe weather warnings - just about held on the day of the picnic, but in the event, at least one college withdrew its permission for its students to go on a school trip that morning, following the two bomb alerts right down the road from the St James's Park picnic venue.
ESOL students who are trying to register for courses next year are already being turned away in droves by the few colleges that have already opened registration. The government announced as part of concessions made in teh Spring that ESOL students on benefits (including Housing Benefit) or spouses of those working but on a low income who produced their wage slips would get full "fee remission" for ESOL courses. But no advice or guidlines seem to have filtered down yet to the college admissions departments, which means that they're still turning these students away based on old criteria that hasn't yet been updated. One class at a North London college, that would normally be full already for next year, has only three students who are able to enroll for next year.
Teachers in the lecturers' union UCU are planning a "public ESOL lesson" for the start of term in the second week of September, in which they threaten to teach ESOL classes in the street outside colleges for those students who have been turned away because they can't pay fees.
The photo shows the delegation preparing to enter Downing Street: UCU Associate General Secretary Paul Mackney (white hair, glasses), Aylin (curly brown hair, black top), an Hourly Paid Lecturer (HPL) on a temporary contract, a category of teacher likely to bear the brunt of the coming cuts in further education, and ESOL students from London further education colleges. The second photo shows the ESOL demo by students and teachers over the road from Downing Street.
Posted by Matt Salusbury at 14:42