A video of my talk from Weird Weekend 2011 on the pygmy elephants of Kerala, India, is now online here. As I point out early on in the talk, "slightly smaller elephants, possibly" would be a better description. Including questions, the talk's just under an hour long, and features a never-before-seen photo of kallana, the alleged pygmy elephant of Kerala, and the Neyyar-Peppara forest tree-crab.

My talk is opened with a somewhat bewildering introduction by the man in the fez ("Barry Tadcaster", in fact the alter ego of the Centre for Fortean Zoology's Richard Freeman) and his "Orang Pendek" puppet. Such bizarre, non-sequiter introductions are a long-established Weird Weekend tradition. Please don't take Freeman's/Tadcaster's comments about me nicking Robocop's bike from behind the Polytechnic literally! 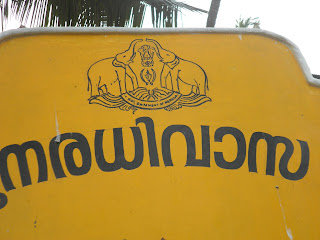 Conventionally-sized elephants feature on the coat of arms on the State of Kerala, seen here on a Kerala Tourism Ministry sign in Kovalum.
Posted by Matt Salusbury at 16:34