Rise of the Korean English-teaching robots?

Matt Salusbury reports on Korea's next generation of EFL educators 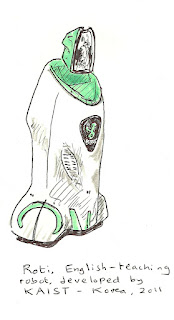 Rough sketch of a Roti teaching robot, by the author


South Korea has set itself up as a global centre of excellence in robotics, with the government funding robot research. Machine-gun-equipped robot guards patrol the demilitarized zone, the tense border with North Korea. At 14.6 billion won (£8.12 million) each, robot border guards can identify whether a soldier is a North Korean infiltrator and whether they're surrendering. Somewhat less terrifyingly, EFL teaching robots are now infiltrating the country's classrooms.

As with most new education technology, finding appropriate ways to use the technology is more important than the hardware itself. (Many EFL teachers will recall being told, 'You have to use the interactive whiteboard in your lesson because the inspector's coming.') Current EFL robot trials suggest Korea's educators have found a workable application for teaching robots - allowing a native-speaker teacher in an office somewhere to 'visit' EFL classrooms to support non-native teachers. One aim is to provide remote support to teachers in provincial cities, drawing on the wider base of teaching skills in Seoul.

The latest Korean robo-teacher is Roti, a Korean Advanced Institute of Science and Technology (Kaist)-developed 'telepresence unit' deployed in schools in the cities of Masan and Daejon. A video of Roti at work seen by the Gazette shows what is basically a TV monitor on the end of a pole, borne around n a set of wheels. The TV monitor can swivel around to face students, and on the screen is the face of the native speaker EFL teacher, who converses with the class while the robot walks around interacting wit the students, a Korean teacher and the classroom whiteboard.

As well as Roti there's the small penguin-shaped Engkey robot, another Kaist product. Some 36 of these were deployed in Korean schools last year. There's also a stand-alone version of Engkey with no human controller, which instead uses voice recognition to help students practise English pronunciation, particularly useful for that boring reinforcement work that language learning requires. Engkey comes ith optional male or female voices - thoug the female proven more effective in teaching. In one lesson demonstrated to Korea Times, Engkey told a student, 'Not good this time! You need to focus more on your accent. Let's try again.' Shy youn learners often find robots easier to talk to than daunting native speaker teachers.

Robots such as Engkey and iRobi (which takes the class register, leads nursery school children in songs and reads to them) will be in every Korean kindergarten by 2013 and every Korean school by 2018. Kaist's roboticists caution against leaving the robots to look after the kids for too long because the children may develop 'attachment disorders'.

Korea seems to have got it right by using robots as an add-on teaching assistant to enhance the effectiveness of native speaker teachers - in short supply - collaborating with real-life Korean Teflers. The nightmare of a Terminator-style rise of the machines in EFL is still a long way off, but teachers should perhaps be alarmed by claims for the next phase.

The Hyundai Research Institute's Kim Shin-kwan predicted last year in the New York Times that robo-Teflers will eventually 'evolve into stand-alone teachers which do not need human guidance', possibly putting the estimated 30,000 native-speaker Teflers in Korea out of a job. Kaist's Engkey team leader added that Engkey will 'mature' enough to completely replace English teachers in 'three to five years'.

Kent Holiday, CEO of Eleutian, a company that teaches via internet video-conferencing links to classes in China, Korea and Japan using state certified US public school teachers, corresponded with me in January 2013. In Holiday's view, the English-teaching 'robots' that glide around Korean classrooms are 'a great marketing story for Korea but in reality it is not working'. Instead, 'students - and more so parents - want their children studying when possible with a US teacher.' An article based on an interview with Holiday will appear in the forthcoming (April 2013 IATEFL conference special) EL Gazette.