My head is still spinning from the numbers, and just how huge the numbers to do with India are. The state of Bihar alone is training 67,000 English teachers. The state of Marharashtra (it includes Mumbai) pays for 14 million free school meals a day, and gives out 16 million free text books each academic year. In total, India aims to 'upskill' half a million young people in skills including English. 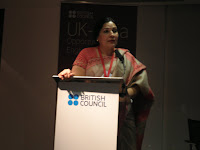 
There are opportunities aplenty for UK institutions to collaborate on research projects into "Indian ELT", there will be more details out soon in EL Gazette and via its Twitter feed (@ELGazette). Rajendra Darda, Minister for Schools for the state of Maharashtra. He studied journalism at the London College of Printing in the 1970s Dr Rukmini Banerji of ASER Centre, which does the largest annual survey of English proficiency among Indian schoolchildren 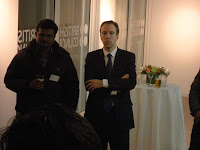 UK Minister for Skills Matthew Hancock (right, arms folded,) described as "India-tastic" his visit to India and the Indian delegation's visit to the UK over the previous fortnight.

Interesting article. There is a site that offers help with custome term paper writing UK for students just like you. Check it out now!