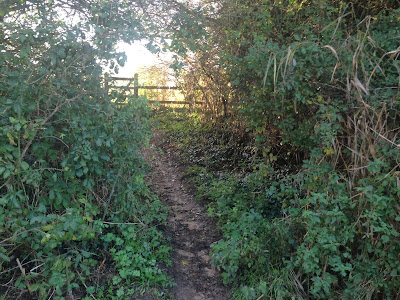 Shown above is my photo of the location of a Big Cat sighting in Eastbridge, sometime around 2008. The member of staff at Dunwich Heath National Trust reserve who told me about it (they weren't exactly sure of the year) said a visitor came back at the beginning of the season in the following Spring and sought them out to tell them about it. The Dunwich Heath staff member (can't disclose any more about them, I regret) had their own sighting of a black big cat (probably a melanistic leopard or melanistic puma, if there is such a thing) in Dowcra's Ditch on the reserve.

The visitor to the reserve reported walking from the footpath from Minsmere to Eastbridge. (It's just south of the RSPB Minsmere reserve, the other side of the sluice ditch from the southern edge of Minsmere.) They came to a gate on the path, and when he went through the gate and was closing it he saw the black big cat behind him. He described how they sat their watching each other for a short while before the big cat bounded off.

I recently went to take a look at the location. What struck me was that it was the prefect ambush site for a hunting big cat. The path from Minsmere goes through the British Energy estate, with its marshes, where there are otters. Otters are on the big cat's menu, as are pheasant in particular, and any waterbirds they can catch (I saw plenty of duck). I saw tracks of otter and deer when I was there - deer being the favourite food of British big cats. When I came through the gate in the opposite direction - from Eastbridge - I emerged from an open field into a shaded area with trees and a bramble thicket on either side, creating a sort of tunnel either side of the footpath. When I came out of this cover, pheasants on the path ahead took flight. It's the perfect spot for a big cat to sit around all day out of sight and jump out at any passing wildlife. 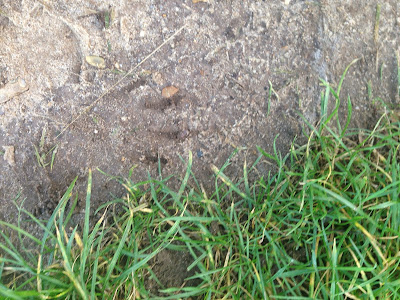 Otter tracks on the footpath from Minsmere to Eastbridge

Also noteworthy nearby was the spooky-looking field of dead sunflowers. What happened? Did it get flooded, or did the field of sunflowers get turned into a nature reserve? 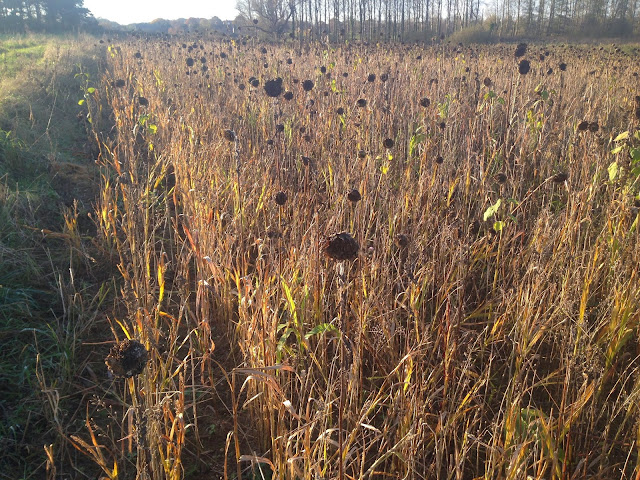 Big cat sightings local to this area will almost certainly feature in a forthcoming interview I'm doing with Jon Wright of BBC Radio Suffolk on big cats in Suffolk, provisionally to be broadcast on New Year's Day 2015.