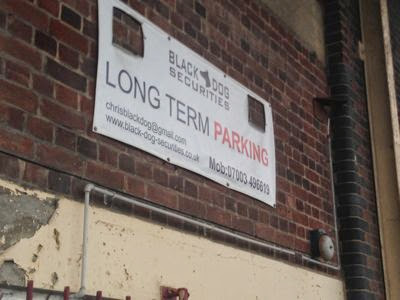 
Bungay's Black Dog, which - according to Rev. Abraham Fleming's A Straunge and Terrible Wunder of 1577 - ran through St Mary's Church, Bungay, one Sunday in August of that year, can be found on the "Welcome to Bungay" sign (below) right on the Suffolk-Norfolk border. The current coat of arms (much more recent, from the 1950s) shows the terrifying Black Dog and lightning bolt. The motto translates into English as "Hold to the ancient traditions." 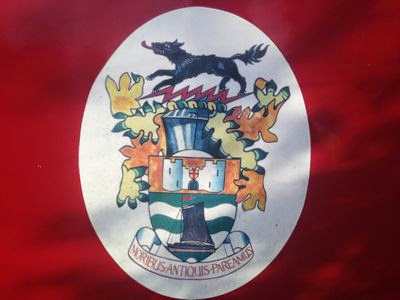 The Black Dog on the Bungay coat of arms, on the "Welcome to Bungay" sign

In A Straunge and Terrible Wunder included the black dog is the Devil in the form of a dog, during a terrible thunderstorm that featured thunder, lightning, hail and "darkness". It killed two men - "wrung the necks of them bothe" - as it ran through the church at Bungay, inflicting strange and terrible burns on other worshippers who survived. The church clock exploded. The same black dog then appeared in Blythburgh, also in Suffolk but to the South, on the same day, jumping onto beams inside the church, before slew "two men and a lad" and others in the congregation were "blasted", before it flew out.

The Bungay black dog seems to be a very different animal to the Black Shuck of East Anglian tradition. Black Shuck, terrifying though it could be, rarely if ever attacked people, and it could sometimes (as in the case of the one around Dunwich) be a protective spirit. The Dunwich variant would fall into step with walkers at night, and as long as they avoided direct eye contact with it, it would see them home safely. Others talked, like the one seen on the road into Woolpit (near Needham Market), which accurately foretold the imminent death of one person it encountered.

In the depression of the 1930s, the black dog from the Straunge and Terrible Wunder was deliberately revived in the hope that tourism would revive the town of Bungay's fortunes, with the black dog and lightning bolt emblem being placed on the town weathervane over the Market Place. It can also be seen on this sign on the door of the town's Waveney District Council offices and on the sign at the Bungay Town FC ("The Bungay Black Dogs") training ground (below), actually just over the Norfolk border in Ditchingham. 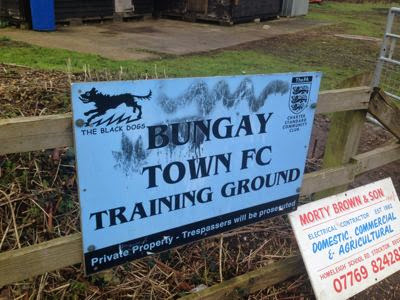 There ara also scorch marks on the inside of the door to Blythburgh Church, said to be made by the claws of the Black Dog. A more likely explanation is that these have something to do with Cromwell's New Model Army, who requisitioned the church as a stable for their horses, and probably had some kind of farrier's shop in operation for shoeing horses, in which red hot pokers would have been standard equipment. 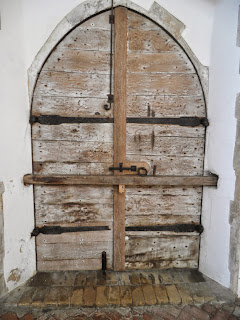 Scorch marks on the door of Blythburgh church, attributed to the Black Dog

The only fatalities recorded in any of the parish records that come close to the Straunge and Terrible Wunder story are two burials of men killed by a falling section of the belfry at St Mary's Church, Bungay in 1577, during a thunderstorm. It seems there may well have been a storm in which a lightning strike caused damage that killed people. Some have speculated that the terrible burns inflicted on other worshippers who were "blasted" could have been some kind of exotic ball lighting phenomena that careered through the church.

A similar phenomenon could have been at work in "The Great Thunderstorm" at Widecombe, Devon in 1638, in which a ball of lighting burst through the church window, tore of part of the roof, killed four and injured 60, leaving the vicar's wife in particular "pitifully burnt". (Sound familiar?) A contemporary woodcut shows a dark sky, thunder, hail, bits of the tower falling off and a ball of flame escaping from a cloud and careering towards Widecombe's church, but no Black Dogs in evidence. 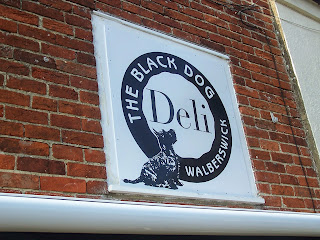 The Black Dog Deli in Walberswick. While its sign makes a tongue-in-cheek reference to local Black Shuck traditions, there is a local story about Shuck terrifying a US airman and his wife immediately postwar by repeatedly ramming the wall of the hut where they lived one night. 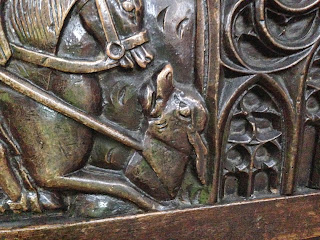 This animal being slain by St George on a 14th century walnut wood chest in St Andrew's Church, Southwold, is clearly meant to be a dragon. But he does look awfully like a really massive dog!

It's more than possible that the Rev. Fleming made the whole thing up, or considerably embellished a garbled account of the 1577 storm that had reached London, where it was published. Fleming may have chosen Bungay as a place so out of the way (at the time) that he was confident nobody could go and check out the details. (The full title of the pamphlet is A Straunge and Terrible Wunder wrought very late in the parish Church of Bungay, a town of no great distance from the citie of Norwich, so the Rev. Fleming felt he had to explain where Bungay was to a London audience, so obscure was it.) Fleming - or his sources, if he had any - may have been influenced by local Black Shuck legends. It's noticeable that in the Suffolk witch trails of the seventeenth century, inquisitors took care to insert references to encounters with Black Dogs among all the clearly made up nonsense about imps in the form of headless, bloodsucking babies, exploding mice and ducks, oversized flies and legless horned greyhounds. Slipping in a bit of Black Shuck, an actual local tradition, gave their fantastic testimony extracted under torture a bit of authenticity. 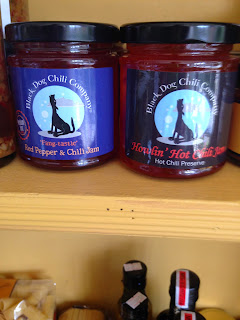 Products by the Black Dog Chilli Company of Martlesham, near Woodbridge. Shown here on the shelves of the Black Dog Deli, Walberswick.

The Rev. Fleming in his introduction rails against "sin", sodomy in particular, and comments that the events in Bungay were "A spectacle no doubt of Gods judgement, which as the fire of our iniquities hath kindled". It has also been suggested that the Rev. Fleming was actually making an allegorical point about God's wrath at a particular juncture of the then unfolding Reformation. But Fleming would have been so terrified of the Queen's commissioners that he hinted at God's wrath at religious reform in such veiled terms that whatever his point was, it's been lost to us. 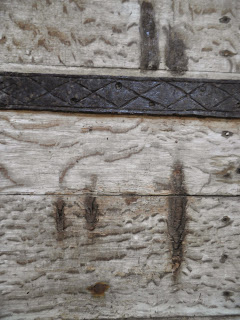 Blythburgh's scorch marks in close up

All this - and more - in the forthcoming Mystery Animals of Suffolk