Map of lynx sightings in Suffolk 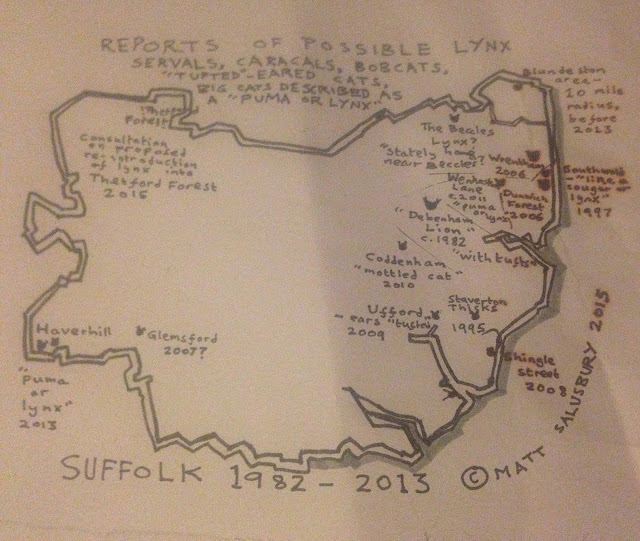 This is a first draft of my map of possible lynxes, servals, caracals and "tufted" cats reported in Suffolk from the 1980s to the present day. I've included the "Debenham Lion", described as like a small lion with short ears with tufts on them, and a "mottled cat" that matches the colouration of a lynx. Several big cats described by observers as a "puma or lynx" (or "cougar or lynx") are included, as is the "Shingle Street lynx", who is a lynx only by association, after the East Anglian Daily Times included in their report a photo of a lynx as an example of an animal "similar to the big cat seen in Suffolk."

I've also included the Beccles Lynx, actually shot in Great Withcingham, Norfolk, and found in a freezer near Beccles during a Norfolk Police/Defra investigation, now presumed to be stuffed an on display in a stately home "in the Beccles area."

It'll be in Mystery Animals of the British Isles: Suffolk, out soon.

Myself and my daughter saw what we think was two lynx cubs along the narrow road leading to Eastbridge, near to Leiston earlier this evening. (Thursday 29th October).
There was a dead rabbit or something in the road and it was either eating or investigating whilst the other one went into the hedgerow.
It was like a small stumpy very fluffy grey and black kitten like looking creature from the back, didn't see its face but I've never seen anything like it before