British Library, front cover image for the purposes of a critique or review, Copyright Act 1988. Pamphlet out of copyright

I found this pamphlet, from the Thomason Collection, in the British Library, thanks to Richard Muirhead for his librarianship skills in pointing me in that direction.

It describes, as the title suggests, "The Body of a Mighty giant dig'd up at Brockford Bridge neer Ipswich in the county of Suffolk" and is written in the form of letter from "I.G." to his brother in London, updating him on "the town of his nativity". It's dated 1651, when solidly Parliamentarian Suffolk was under the regime of Lord Protector Oliver Cromwell and his rather overstretched Major Generals. The Withchfinder General - Matthew Hopkins and Company - had already had their excesses in East Anglia put a stop to by then.

The pamphlet describes a skeleton found by workmen digging in the "gravelly way" at Brockford Bridge. It's unclear whether this is an already existing road made from gravel or a feature from which people dug gravel - a less than abundant commodity in relatively stone-free East Anglia. (The number of "Brick Kiln Farms" in Suffolk is notable.)

The more I read the description in the pamphlet, the more I am convinced that the "mighty Giant" was the partial skeleton of a fossil mammoth or elephant, minus its tusks.

The body had a skull that was "half a bushel" in size - half a bushel is about four gallons (just over 18 litres). The leg bone (presumably a thigh) was "about the width of a middling woman's waist" and when the skeleton was laid out it was ten feet (3.04 metres) long. Eleven "huge teeth" were in the skull, or at least among the skeleton. Elephants usually have 26 of these, including six absolutely huge molars. Especially in juveniles, they'll have teeth at the back still under the gum waiting to grow through, that would be visible in a skeleton.

Below is an example of a Suffolk bushel measure (eight gallons), from the sign of The Bushel pub in Bury St Edmunds. It's near the bus station. 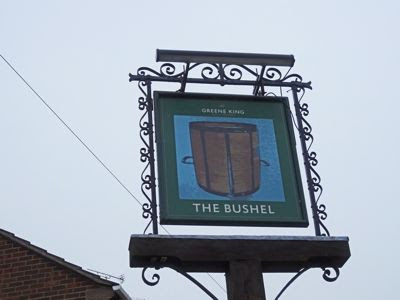 Presumably these measurements would be when the skeleton was laid out as if reconstructing a human-like biped. I strongly suspect it was a fossilised prehistoric elephant or mammoth.

Ipswich Museum has some impressive mammoth bits, and Southwold Museum has a whole chest of drawers of elephant bits on display (sorry, no photography allowed, so no photo!) West Stow Museum's tiny palaeontology display has a fragment of a mammoth tusk and a bit of an elephant's shoulder. Halesworth Museum also has a fragment of a mammoth tusk. Elephant and mammoth remains are plentiful in the county. (Elephas antiquus, slightly bigger than an Asian elephant and similar in build, is the most likely candidate.) There's even a short geological period known as the Ipswichian Interglacial from deposits from round there laid down during an interval between Ice Ages. Pakefield Man - known from worked flints found in Pakefield, just South of Lowestoft - was around the area 700,000 years ago.

I found a reference to "stupendous ELEPHANT" in a menagerie of "foreign animals" visiting Ipswich in 1800, which claims to be first live elephant ever exhibited in the County Town. So it's unlikely anyone would have actually seen an elephant, or even recognised its skeleton, in 1651. The skull, with the big cranium, and if it had its tusks detached, looks like a giant human's, and while living elephants' feet are pillars of flesh designed to support several tonnes, the actual bones end in long, thin toes. The forearms could have been mistaken for a human arm ending in fingers, and the shoulder blades and ribs look a bit like a human's. 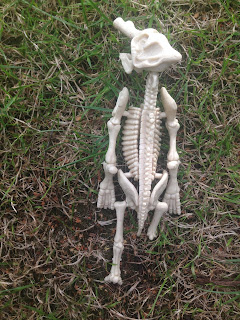 Most of a scale model of a mammoth skeleton from my collection - it's a snap-together kit so you can configure it either as a quadruped (as you're supposed to) or "laid out" as if it were a biped, as I've done here. The description in the pamphlet suggests the "shin bones" are partly damaged or missing, so I've partly left them out. It also says the teeth in the upper jaw were missing, so the tusks presumably would be too. (The tusks are incisor teeth from the upper jaw.) Minus its tusks, doesn't it look a bit like a human skeleton? Mammoths have more "swept-back", pointy heads, so an elephant skull would look slightly more human-like.

The pamphlet says the locals "broke up" the skeleton, everyone wanted a piece if it, it seems. While snapping up bones is hard, cracking off bits of a fossil is easier.

Update (21/03/19): Together with Tim Holt-Wilson, I think we may have discovered the Gravelly Way where the “mighty giant” was found back in 1665. It’s a footpath immediately to the south of the bridge in Brockford Street, which the busy A140 (an old Roman road) cuts through. The footpath appears to be the old road from Mandelsham to Thorndon. It’s certainly very gravelly, made from the river gravels around the catchment area of the River Dove. A forthcoming article in Deposits magazine will include some more detail on this, including a survey of records of other fossil elephant remains dug up locally. 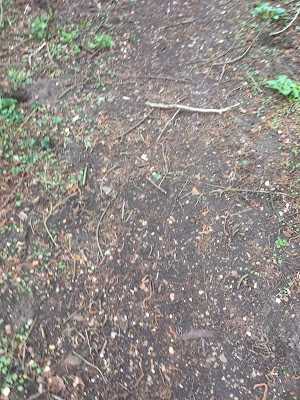 Possibly the Gravelly Way, where the mighty giant was dug up in 1665, by the River Dove at Brockford. 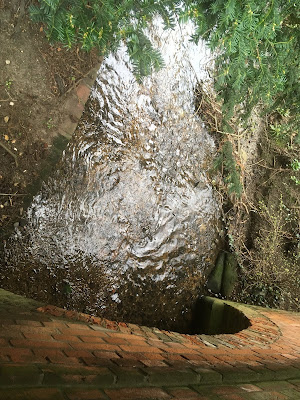 The River Dove today, as it passes under Brockford Bridge at Brockford Street. It would presumably have been higher in 1665 when the mighty giant was found, it would definitely have been a much mightier river at the time the “giant” - probably a straight-tucked elephant (Elephas antiquus) died around 400,000 years ago, possibly in the Hoxnian Interglacial period.