Mummified cats in He Say Land 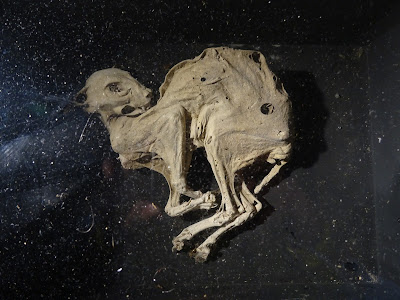 The magnificent mummified cat at the Mill Hotel Sudbury

"He Say Land" is named after the sing-song language of the corner of southwest Suffolk and all the way down to Halstead over the Essex border. That's according to the older inhabitant of Sudbury on the number 11 bus while we were waiting at the queue on Ballingdon Hill going into Sudbury. There's one bridge to get you over the Stour into Sudbury, and on Saturdays the queue is backed up at the Ballingdon Hill traffic lights all the way up to the top of the hill and the "Welcome to Suffolk" sign.

It's called "He Say Land" because a lot of local dialect conversations begin "He say" this and "He say" that.

The same man also told me the river delineating Suffolk from Essex, the Stour, is pronounced "store" by the locals, while only newcomers pronounce it with two syllables to rhyme with "hour." So unmoving was the traffic that I asked the driver of the no. 11 bus, stopped at the top of Ballingdon Hill, if he could let me out to unfold my folding bike and cycle into Sudbury to save time. I'll be lynched, mate!" he told me. 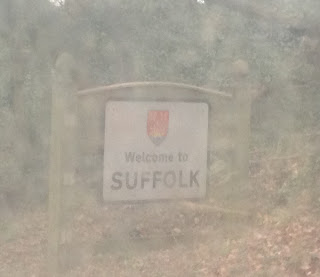 The "Welcome to Suffolk" sign at Ballingdon Hill, through the window of the no. 11 bus, which could do with a clean!

Driving around the hairpin bends and narrow medieval streets of Sudbury, you meet some of the world's most patient and chilled drivers. I never once heard a car honk. As soon as any of the local drivers rounds one of the hairpin bends, they automatically pull in and let oncoming traffic pass. They pull over as soon as they see an approaching car (or bike, even), although it can be quite a long way off.(Suffolk drivers generally have the reputation of England's most polite and laid-back, although try telling that the the volunteers with their speed guns monitoring the maniacs charging along the Westleton to Blythburgh road at 40mph. See also the Coastal Scene hyperlocal newspaper, a large part of which is taken up by news of high-speed collisions on the A12, usually involving deer.)


My trip was another "two fingers up at Abellio Greater Anglia" expedition, as they wanted to charge me the usual fare for making my own way out to Manor Park tube (somewhere on the Central Line but not central at all), bus to Ingatestone, then train the rest of the way, that'll be an extra hour. I took the train to Stansted airport, then three buses to Sudbury - they all lined up rather well, with only short waits in between, despite the bus to Halstead no longer existing and all the bays for buses changing.

On the way from Stantead to Sudbury on three bus journeys, I passed through Braintree. It's where you get offered a house straight away if you put your name down for a house in Suffolk, has a confusing bus station. Just when you think you have a half hour wait ahead, you work ouand t that another bus will get you there sooner, and then another bus altogether, not on the timetable, puts in that's going to Halstead. Braintree also has a large statue of Neptune or somebody, which features a large bronze otter.


The lady at reception at the Mill Hotel in Sudbury - on the Stour - didn't bat an eyelid when I asked if I could photograph their mummified cat. It's in a hole in the floor, covered by glass. Apparently it was taken out after it was found, but the hotel suffered a fire so they felt it best to put it back.

The top of the road immediately outside the Mill Hotel was one of the very few places in Suffolk I've been to where the hill was so steep I had to get off my bike and walk. 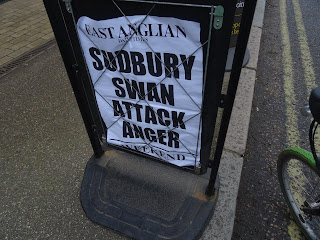 When swans attack? Spotted in Ballingdon

I also briefly got to see Siam Gardens, the tiny Sudbury town centre park where the Sudbury Wardens had a call-out regarding a tiger, which turned out to be of "the soft-toy" variety. 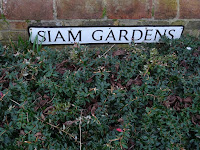 I also spotted what looked like a woodwose on the top of All Saint's Church, Sudbury. Barry Wall of the Sudbury Society later confirmed to me that it indeed was a woodwose. It blew down in a storm in the 1980s, and you can just see the top of a steel rod protruding from the top of his head, which presumably was put there to stop him falling off the tower again. It's one of only three woodwoses on Suffolk church towers I know - the others being Kelsale and Haverhill. 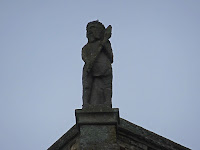 Woodwose on the tower of All Saints, Sudbury 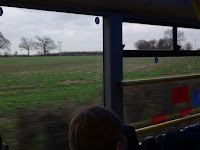 View from the Beestons bus from Sudbury to Ipswich


From Sudbury it was the Beestons double-decker bus all the way to Ipswich, just over an hour at high speed. Between Hadleigh and Ipswich we shot past what appeared to be an emu in a field, watching us through the fence. I found it later on Google Street view, watching the Google car go by. 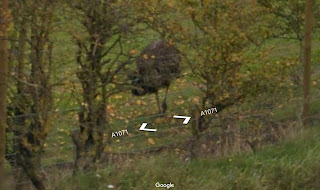 Needless to say, much of the above material will make its way into the imminent Mystery Animals of the British Isles: Suffolk, now between two and three months away from publication by my cautious estimate. I'm now struggling through the second proofs.