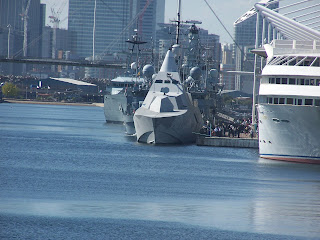 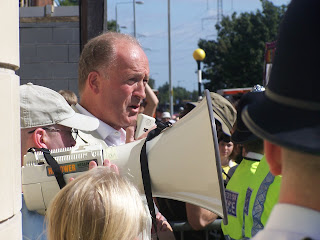 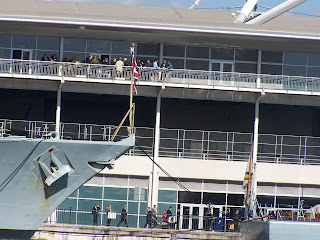 Despite an unfortunately policing incident on the way in - which I've taken up with my union - policing of Europe's biggest arms fair - DSEi - was relatively chilled this year. There was a kind of protest pen outside Custom House station, but people seemed able to walk in and out of it without too much hassle from the cops. A protester told me, though, that one protester was being held inside the station under the Police and Criminal Evidence Act, and the station was closed to everyone including press.
There were a lot of corporate media who wore their accreditation to get into the arms fair, but who were out mingling among the protesters and photographing and interviewing them, as if they were the coolest thing about the fair.
Councillor Alan Craig, opposition Christian People's Alliance member of Newham Council, whose ward includes half of the Excel Centre, venue for DSEi, was there. (Second picture.) He said he'd been elected pretty much on a close down the arms fair ticket. Soon after his election, he'd got the Labour-dominated council to pass his motion condemning the arms fair, but so far he hadn't got them to actually do anything about it beyond 'warm words.'
Sargeant MD51 from Peckham nick was kind enough to escort me over the busy Connaught Road Bridge to photograph the cool-looking state of the art stealth warships parked at the docks outside the Excel Centre. Their jagged profile is presumably something to do with their radar signature. (Top picture.)
I was really there looking for the Space Hijackers' tank, which they planned to sell to the highest bidder outside DSEi. A protester told me 'the police have rumbled where it is, so I don't think it's going anywhere.' Sargeant MD51 had been briefed about the Space Hijakcers' tank, and commented with a smile, 'it's not the easiest thing in London to keep hidden, is it?'
I gave up wating for a tank that wouldn't now be showing up, and went home.
It turns out that the Space Hijackers had spent an additonal £2000 on a decoy tank - the one the police had found - and turned up in a spectacular armoured personnel carrier, still in its white UN colours.
I didn't manage to interest any of my usual media outlet clients in a DSEi report this time, but I was encouraged by the reason given. Previously, none could be bothered to cover it, but now they all told me they had their regular people on the case already.
Posted by Matt Salusbury at 16:31