London Underground with NO ADVERTISING! (again) 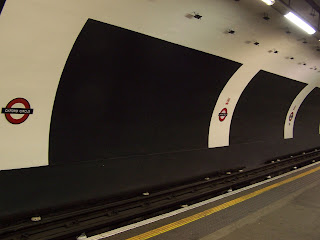 In November 2005, I photographed London Underground’s Turnpike Lane station transformed into some kind of Communist-era Dada absurdist guerrilla art surreal canvas, its platforms and tunnels hung with empty spaces where there was NO ADVERTISING. See my website gallery. Sadly, Turnpike Lane is back in full-on advertising mode. However, I recently spotted the Bakerloo Line platforms at Oxford Circus, presumably in mid-refit, also WITHOUT ADVERTISING! The Waterloo and City Line, also known as ‘the Drain’, is also free of advertising. But this is for no other reason other than that the Waterloo and City Line is officially a No Fun Zone. It exists purely to move commuter drones between their place of work and their London train terminus serving their commuter suburbs during rush hours, and the one time I used it, everyone was in a totally foul mood. The Drain has nothing to do with any possible leisure, pleasure or fun application, which is presumably why they don’t even bother advertising on its platforms or trains.