This article first appeared in Fortean Times magazine, no 241, October 2008


Colindale is drab North London suburb that most Londoners, let alone people from out of town, would be hard-pressed to find a reason for visiting. For many, its only draw is the creaky 1930s building at 120 Colindale Avenue, which houses the British Library’s national newspaper collection.

Charles Fort, of course, spent way too much time in the British Library (BL) newspaper collection, back when it was still housed in the original British Library complex in Bloomsbury. That circular reading room, where Karl Marx also researched Das Kapital, is now a permanent exhibit surrounded by the British Museum, but don’t expect to find Fort on the list of famous BL ticket-holders displayed there. Shortly after Fort’s day, the newspaper collection shipped out to leafy Colindale.

Most researchers have a love-hate relationship with Colindale, and its reliance on the world’s least user-friendly format, microfilm. Most of the newspaper collection has ended up as fiddly spools of this albatross-like intermediate technology. The BL admits its surveys of Colindale users found their experience of Colindale was ‘very poor.’

But frustration with Colindale now turns to teary-eyed nostalgia, as the newspaper collection will soon be leaving. Its digital and microfilm elements will move to the excellent British Library site at St Pancras, close to the Channel Tunnel train terminal. Old-school physical periodicals on actual newspaper will go to 262 km of shelving in the ‘low-oxygen’ building in the BL’s Document Supply Centre in distant Boston Spa, up North in West Yorkshire. The BL press office scotched rumours put about by a marketing manager that the new facility’s automated newspaper handling machines looked like Daleks. (Source: author’s notes on ‘A Library for the 21st Century’ presentation by Barry Smith, senior marketing manager BL St Pancras, 21 April 2008)

Scanned or photocopied newspaper pages can be ordered (for a fee) but once the newspapers have moved to Boston Spa, you will only be able to get your hands on the actual physical copies there ‘in extreme circumstances’ and at least 24 hours notice. (Source: email from BL press office Lawrence Christiansen, 15 August 2008)

You won’t be able to walk into Boston Spa unannounced and expect newspapers to be delivered to the desk in as little as 45 minutes, as you currently can at Colindale. Once a newspaper is on microfilm and digital, you’ll usually have to go to St Pancras to see it on these media. An ever-shrinking proportion of newspapers will remain that they’ll let you actually handle at Boston Spa.

Why the move? 30,000 people trek out to Colindale annually, to hasten the destruction of the collection by handling it with their own fingers and thumbs. 15 per cent of the print collection has been ‘rendered unusable’ by those pesky readers handling it, with another 19 per cent of newspapers ‘high risk’ enough that they’ll will need withdrawing soon.

Fortean researchers have until December before the newspapers start their gradual migration out to St Pancras and Boston Spa. The collection will go within three years, and Colindale finally closes its creaky doors in 2012.

Colindale’s opportunities for local procrastinatory skiving for researchers will also be a thing of the past. Gone forever will be work avoidance breaks spent browsing in the Japanese pound shop in Colindale’s ‘Oriental City’ shopping centre and Hannants, Britain’s biggest aviation model shop nearby.

So be quick about it if you’ve ever wanted to hold in your hands the 13 March 1986 print edition of The Sun newspaper with the headline ‘Freddie Starr ate my hamster’. If you’re curious about whether the Westmoreland Gazette reported any pre-1950 sightings of giant eels on Lake Windermere, or have even wanted to check a century’s worth of North Wales newspapers for possible references to Llangorse Lake’s giant pike, do it now if you’re a technophobe or you dislike microfilm as much as I do.

One day the BL’s complete collection will be ‘digital surrogate’ - digitised copies of microfilm spools. Digital will hopefully get cheaper and easier, but until then, the BL will continue to transfer paper copies onto microfilm and (maybe) digitise these. They hope to have 3 million pages of microfilm digitised by the end of 2008, but with 750 million pages of the stuff at £1 a page to digitise, expect to be swearing at snapping, scratching and jamming microfilm for a long time to come. My favourite microfilm ritual is discovering a spool that’s never been ordered before, so you have to take it to the enquiries desk where they loudly ‘trepan’ a spindle hole into the spool using a hammer and a centre punch on the library floor.

By keeping its microfilming operation, the BL wisely hedges its bets about digital formats, pointing out that the long-term archival permanence of digital media like CD-Rom is still unproven. Most customers going to the BL still want to handle paper books and newspapers. And despite BL’s stated aim to get its customers to ‘migrate’ to digital document delivery, 70 per cent of all BL copying is delivered at the request of punters in paper format and sent by post. 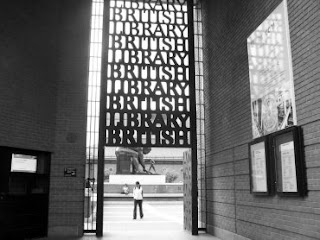 Note: since this article was written, the British Library has announced that it will also be moving its "low-use" science and humanities serials and monographs from its depot in Micawber Street (round the corner from the St Pancras site) to Boston Spa, starting in January. The BL's estimate of when the newspaper library collection will start to move is now being reported as "later in 2009". See www.bl.uk/collectionmoves for details.