Migrants get to grips with the language of construction

This article first appeared in the building trade weekly Construction News of 12 August 2008. Read it on their website here

How can companies ensure foreign workers face up to the challenges of English and their new jobs? By Matt Salusbury

Employers, especially those in London, are increasingly recruiting migrant workers where English is not the first language. The Chartered Institute of Building (CIOB) report on skills shortages this spring said that Polish andother Eastern European migrants are beginning to return home in large numbers, with 18 per cent fewer Poles registered for work in the UK in 2007 than in the previous year.

The workforce will increasingly be made up of long-term migrants – those who have settled in the UK permanently, often after they or their family members arrived as refugees, and who have often been learning English as a Second Language (ESOL) for several years before entering the workforce. 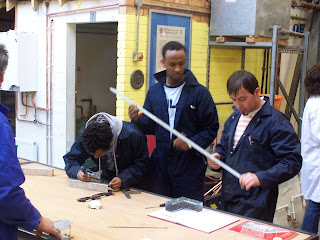 While migrants can find work easily as low-grade labourers, and often have manual skills and experience, their lack of English is holding them back from developing their careers – becoming more skilled and qualified specialists, supervisors and managers. Several Kosovan and Somali builders on a College of North East London (Conel) course say they felt their lack of
English most keenly in marketing themselves to prospective employers and agencies, and in compiling CVs.

There are increasing demands for all builders to give evidence of their qualifications and skills in written assignments – which many native speakers find challenging enough. While teams on some sites are monolingual Polish, with only the foreman needing to speak English, the building sites of London in the near future will be multilingual, with everyone needing to keep raising the level of their English.

What specialist training in English for construction is there and where can employers go for advice on training? 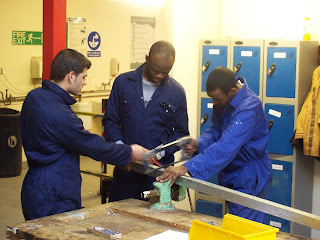 But the availability of training that combines ESOL and construction skills to take migrant builders to the next level is lacking. Several colleges say the funding regime changes so often it's almost impossible to keep pace and adapt.

This – and the scrapping of the BTEC qualification in favour of new types of diplomas – mean some colleges that have successfully run specialist ESOL construction courses still don't know if they can offer one this September. There's more work for industry lobbying organisations to be done in this
area.

Aside from labour shortages in the future and, increasingly, quotas for ethnic minority workers written into big contracts, there are other reasons for employers to take on migrants who have English as a second language. Many are entering the (formal) workforce after two or three years of a full-time general ESOL course, at least 15 hours a week of ESOL, plus several hours of maths and IT.

These ESOL foundation courses have an emphasis on self-study and organisational skills, and they instil the importance of punctuality and self-discipline. Students need a record of 80 per cent attendance to graduate.

The students on Conel's ESOL construction course had all been through such a regime before arriving and they accepted that it would take a long time before they fully qualified. They somehow found time to study in their half-term alongside family commitments. Some of the building lecturers on their course had initially been sceptical about a class of English-language learners, but were quickly converted and now regard the ESOL construction class as among their best students. These students "have got the manual skills, but language skills and lack of qualifications are holding them back," according to David Lambert, who heads Conel's construction department.

Where should employers go for English language training for their workforce? The best first stop for advice is a local further education (FE) college. These will now have a dedicated employers' forum or employer relations team, with an employers' page linked from the homepage of their website. They can advise on possible funding such as Train to Gain, ESOL for Work and other initiatives.

These colleges run on a September-to-July teaching year, so after mid-September it will be harder for them to find the experienced teachers they would need for a specialist ESOL for construction course, but FE colleges are becoming better at starting up tailored workplace courses throughout the year.

If your workforce has a union rep, Ucatt can also work with you to set up a part-funded ESOL course delivered by an FE college.

A taste of construction

The BTEC Introduction to Construction with ESOL at the College of North East London is a taster course, exposing students to plumbing, electrical, painting and decorating work.

Assessments in literacy, communication and numeracy are the same as for nativespeaker English students, but with intensive teaching of the language students need to complete these paper-based elements of the course.

The ESOL tutor for the course also attends the students' workshop sessions so she can identify any language areas they need help with.

The students are mostly men from Kosovo, Albania, Somali, Eritrea and Ethiopia. When the current version of the course started three years ago, students were mostly older men who had practised a trade in their country of origin. But now students are younger and some of them are joining building businesses already started by relatives who have settled in the UK and retrained. 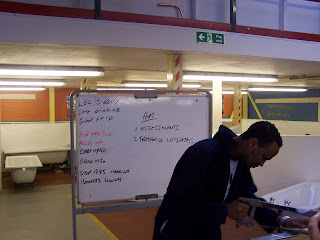 A second year student works
on his assignments
for the BTEC
Construction Diploma. Tasks for the workshop session are displayed on the workshop's whiteboard in the background