Every Time I Think of You - Islington in the 80s

A couple of my photos of Islington in the 1980s appear on screen briefly in the film Every Time I Think of You, which had its one and only showing at the Screen on the Green in Upper Street (Islington, of course!) recently. 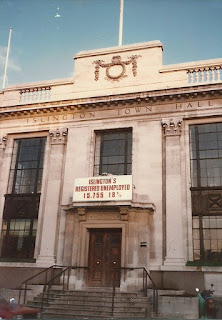 The film will be free to view online soon via the link above. It's based on interviews by people living and working in Islington (Chapel Market in particular) in that decade, some spoken by the interviewees themselves, some revoiced by actors. Actors and interviewees alike were persuaded to improvise something about a mystery woman who was known and loved by all in that era, and who went missing on New Year's Eve 1989 - Toni Sling. We only get to see a blurred photo of her. I don't need to tell you it's an anagram of Islington.

As usual, my name was spelt wrong in the film credits, I was down as "Matt Salisbury" in the "photos supplied by" section. My nephew Luke Reilly, like me also Islington born and bred, is credited for "additional dialogue" and "interviews conducted by". Regretably, his interviews of me, centering on working as a bike messenger among the typesetters of 1980s Clerkenwell, didn't make it into the script.

I recommend the film, and there's also an online photo exhibition of Islington in the 80s from which the photos in the film were taken. Click through this, and you can see all my photos from that bygone age, with my credit on them. 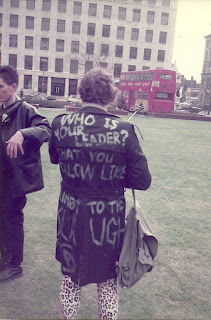 The two photos that made it into the film are a legal observer from the 1984 Stop the City demo in Finsbury Square - funny how history repeats itself! - and if you look closely you can see the Islington Council creche bus that someone's borrowed for the occasion. Finsbury Square was just outside the City, and sympathisers among Council workers ran the demo's first aid point and so on from there. While bank-bashing by the likes of Stop the City was the pastime of a tiny minority of mostly marginal punk anarchists in those days, it has become mainstream now.

The other photo is Islington Town Hall, when it was a "Red" council driven by gesture politics of this sort. Nobody bats an eyelid at much higher unemployment figures but it was a national scandal at the time. And beggars in the streets of London started to make their first appearance in my lifetime around then, to the shock of many. The Town Hall's not flying the Red Flag in the photo although it regularly did in those days. They gave up when firemen from the fire station a few doors down allegedly abseiled up the building and took it down, on several occasions. There was also an old bust of Lenin on display at the top of the stairs of the Town Hall at the time, which once had green paint tipped over it. Why green? No one knows. The opposite of red, perhaps>

An image pasted into my early 1980s scrapbook - a strip from the not very funny "Lazarus Lamb" cartoon, from the contemporary Islington Gutter Press, also flits briefly across the screen in the film.

I'm afraid I don't agree with the view expressed in the film that the 1980s was an age of innocence before the internet and mobile phones. The Eighties sucked. They were the low point of human history, when thousand of years of progress stopped overnight, to be replaced with Thatcherite/Reaganite Free Market Fever, which is bizarrely still with us today, only more so.