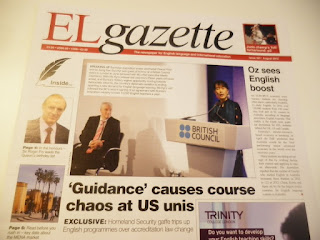 The print edition of the August 2012 EL Gazette is now hitting the doormats, and it has now gone live in its online digital edition at www.elgazettedigital.com

It includes an exclusive investigation into how a Homeland Security gaffe tripped up "Intensive English Programs" over an accreditation law change in the US.

There's also my report on an Arab League backlash against the predominance of English-medium degree courses in the Middle East. (The Gazette has been invited to attend a conference on English-medium education in Cairo in October, about which more later.)

And there's my interview with a CLIL specialist with the education ministry of Flanders - the Dutch-speaking autonomous region of Belgium - on CLIL and "bilingual education" in an officially bilingual country.

There's now a tutorial on how to register for EL Gazette digital (it's free.)
Posted by Matt Salusbury at 04:39