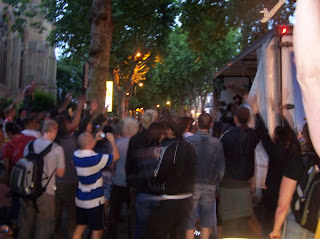 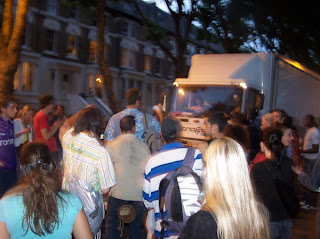 Those of us who are nostalgic for the street parties of the 1990s - long ago pronounced dead - were pleasantly surprised when a street party broke out in North London's Highbury New Park last Sunday (10th June 2007) at the end of the Stokefest festival.

Around 8pm the festival in Clissold Park started to wind down, and the police closed the exit on Green Lanes opposite the White House pub. This could possibly have been to stop the Rythmns of Resistance samba band getting in, so they did a set on the green in front of the housing estate at the corner of Highbury New Park, with much dancing and football kick-abouts. When they finished, the large truck with posters advertising the forthcoming Secret Garden Festival fired up their soundsystem, and with a bit of ineffectual arm-waving from some yellow-jacket community cops, started off down Highbury New Park, squeezing through the traffic calming features and roadworks, with a couple of hundred party people bouncing after them, some on bikes.

To the tune of Blue Monday and Underworld's Born Slippery, they partied down Highbury New Park, with some punters dancing on top of garden walls. Some punters, wineglasses in hand, appeared to have come out of parties in local back gardens, and the lady who asked me where they were going seemed quite good natured about the giant sound system having woken her baby up.

About half way down the long Highbury New Park road, the truck attempted to turn, gave up, and then punters lay down in front of the truck in the road and demanded "More music!" as the sound system crew pleaded, "We've got to be back in Brighton tonight!" Some very efficient crowd control was carried out by a man with a megaphone wearing a tall black top hat with a peacock feather in it, who somehow talked the crowd into getting out of the way and letting them drive off at speed (without the sound system on) in the Brighton direction after about half an hour or partying. An improvised on-street percussion workshop followed as darkness fell.

Apart from the opening minutes, there was not a cop in sight. Street parties like this are the sort of thing we're not supposed to be allowed to get away with anymore in our modern 21st century surveillance world with lots and lots of public order police. But it happened.
Posted by Matt Salusbury at 06:26 No comments: 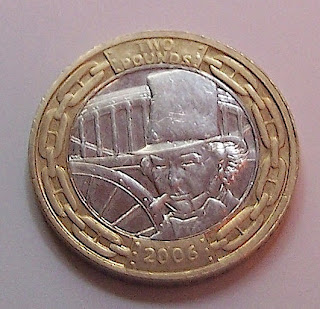 It's only 18 days 'till the smoking ban takes effect in England, so I was somewhat surprised to see that recently minted two pound coins by the Royal Mint, struck only last year, have not 'airbrushed' out Victorian engineer Isembard Kingdom Brunel's cheroot, seen sticking out of the left side of his mouth in the photo above. This is in contrast to the US Postal Service's policy of airbrushing the ciggies out of images on stamps commemorating Humphrey Bogart, James Dean and others.

The Royal Mint's decision is particularly odd considering that Brunel's fatal collapse on the deck of the SS Great Western on its maiden voyage was caused by a combination of the stress of the project, a bottle of port or red wine a day, and chainsmoking cheroots. But then the Royal Mint is a bit odd. There have apparently been complaints that they haven't minted enough two pound coins, and have instead continued to mint mountains of pennies that nobody wants.
Posted by Matt Salusbury at 06:13 No comments: