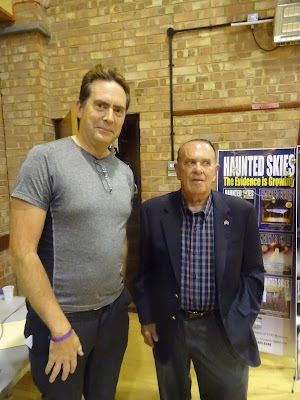 
THE RENDLESHAM Forest UFO Incident (RFUI for short), which occurred over several nights in the last days of 1980, remains Britain’s best-known UFO encounter. Nearly 40 years on, there’s now a UFO Trail in the Rendlesham Forest – complete with a grounded flying saucer sculpture. The former RAF Bentwaters air base, the epicentre of the RFUI, is now the Bentwaters Cold War Museum. A conference on “Rendlesham” – featuring star speaker Colonel Charles Halt, RAF Bentwaters deputy base commander in 1980 – is now an annual event in the Community Hall of the Suffolk town of Woodbridge, six miles from the scene of the incident.

This year’s conference was opened by its organiser, local boy David Young – he runs the Paranormal Dimensions podcast. Next up was ex-police officer John Hanson, author of the Haunted Skies book series on historic British UFO encounters and more recently The Halt Perspective co-authored with Halt. Hanson has seen “numerous UFOs”, including two nocturnal encounters in Rendlesham Forest – a triangular craft and also “milky white orb” hovering off the floor of the same forest, shedding “pieces of fabric.”He passed around “aports” – stones that he said materialised in the air in Rendlesham Forest and landed – too hot to handle – with “thuds”.

Malcolm Robinson of Strange Phenomenon Investigations attributes his career as a paranormal investigator to “too many times on the ghost train as a kid” at his local fun fair. Robinson “started off as a bloody sceptic… how wrong was I?” (He still believes “the vast majority of UFO sightings can be explained,” while most Nessie sightings are “standing waves” caused by boats.) His scepticism changed after he was “slapped and kicked by… nothing” while investigating a haunted house in Sterling, where a “tremendous force pushed down on the back of his hand.” 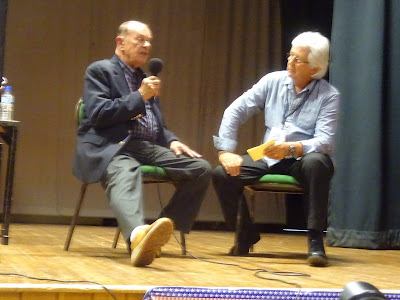 Facebook star Sascha Christie, worked on the Capel Green Rendlesham documentary and knew Larry Warren. Warren was with the US Air Force Security Police based at Bentwaters at the time of RFUI and later co-authored with Peter Robbins probably the best-known “Rendlesham” book, Left at East Gate. Warren later stayed for a while on the Christie family’s sofa, Sascha helped him get Rendlesham-related talk radio gigs. But the title of Christie’s talk was “The Larry Warren Fraud.”

There were dodgy dealings in sports and pop star memorabilia. There was inaudible footage of Warren at other conferences. There was forensic critiquing of a photo put online in 2014, allegedly showing a UFO from “that night” in 1980. There were undoubtedly several different versions given by Warren of what he was doing and where he was on that weekend over Christmas 1980. Warren later admitted that his original account wasn’t his own, claiming he was covering up to protect other servicemen – in particular Sergeant Adrian Bustinza – from deep trouble if they told their stories about Rendlesham’s “underground bases”.

It’s good to see the UFO community doing basic journalistic fact-checking, more’s needed in this field! Christie’s efforts are to be commended (she took this year’s Ultimate Bravery in Ufology Award). But she ran through her thesis at breakneck speed, expecting the audience to be familiar with the confusing chronology around Skycrash (the original RFUI book, by Jenny Randles, Dot Cotton and Brenda Butler – the latter lives locally and was at this year’s event) then Left at East Gate and Bustinza’s account in You Can’t Tell the People by Georgina Bruni. It was all somewhat baffling. 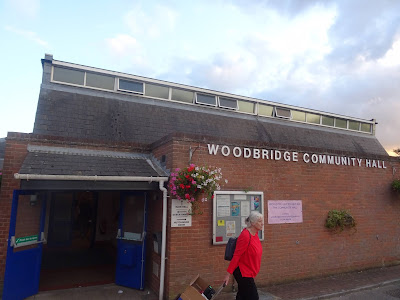 The Woodbridge Community Hall, the conference venue - a short distance from Rendlesham Forest

Astronomer David Bryant spoke on orbs. Bryant admits “many orbs are just photographic” while some orbs caught on film “are clearly moths.” But he believes they’re “not all dust and raindrops.” He’s seen orbs with his own eyes on Track 10 of Rendlesham Forest. He recounted how George Washington at his disastrous War of Independence winter quarters at Valley Forge in 1777 was calmed by the sight of a “green orb” appearing before him.

Bryant believes orbs – “frequently associated with strange mists” – are some sort of living “hungry energy beings” that feed off our “alert expectation” that pumps electromagnetic energy in response to them manifesting in front of us. Bryant concluded that “we must strive to eliminate fraudulent, mischievous and dubious” data to arrive at “something which some day someone might take seriously.”

Hanson lamented the fact that “the media” still don’t take UFOs seriously. But there were a lot of slides showing our speakers posing with X-Files supporting actors or even members of the Bay City Rollers. Robinson at one point admitted “this talk’s gone all over the shop” while several speakers rushed slides of covers of their books past me so fast there wasn’t even time to read the titles. Most talks didn’t so much end as run out of time.

Despite some prior knowledge of RFUI and my journalists’ training, I still couldn’t follow such high-speed presentations. Attention to pace and timing is all it’d take for “the media” to take UFOs more seriously. Do ufologists now expect most punters to experience their lectures via their Facebook channel, with the benefit of a pause button?


Several conference-goers told me they were only here to hear “Chuck” – Colonel Charles Irwin Halt. Woodbridge Community Hall was draped with stars and stripes bunting in Halt’s honour. Unlike the self-taught ufologists preceding him, Chuck with his US Air Force officer’s training knows how to give concise presentations. He can also tell a vivid, compelling and credible narrative.

Joining the US Air Force while still in college, Halt ended up running the Pentagon’s jet engine operation. There followed a stint as adviser to the Shah of Iran’s Air Force – which he ended in time to avoid becoming a US Embassy hostage. He was heading for a command role with US forces in Norway when he was told RAF Bentwaters – then the largest base in the “free world” – needed a deputy base commander. This was in 1980, with a Soviet invasion of Poland feared, so “we exercised all the time – eight to ten hours in a gas mask.”

Over Christmas 1980, Bentwaters was “down for the holidays”, no flights scheduled. Following a routine Christmas Day dinner at Woody’s Bar at nearby RAF Woodbridge, Halt toured the base on his usual daily morning rounds on 26 December.This included stopping at the police base to pick up the police logs around 6.30am, where he found a laughing sergeant describing how three security officers had been “out in the woods chasing UFOs all night” after they “thought they saw a downed aircraft.” 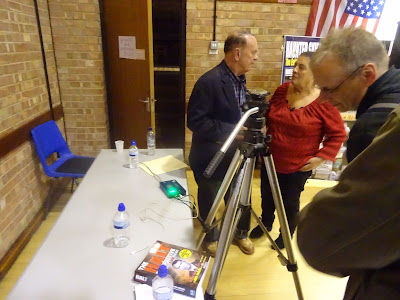 
Jim Penniston, a security NCO, took a out a team off-base in a truck along a muddy track to investigate, leaving their weapons at the hut by the gate, as regulations required. Penniston reported “there’s something out there,” and that radios didn’t work. Halt told how Penniston had relayed back to security control that they “came across and object.” Penniston and another security policeman, John Burroughs, recalled chasing an object, “multicoloured lights, something.”

Halt “didn’t hear most of this stuff ‘till years later.” The security police involved were “drugged and hypnotised by the time I got to them.”

Following the debrief from the security police, Halt then attended the usual command post “morning stand up of senior colonels”. All were “sure there was a logical explanation.”

Over dinner the next night at Woody’s, Second Lieutenant Bruce Englund, commander of one of the two “flights” of security cops, came in white as a sheet, telling Halt, “I need to talk to you and the base Commander right now.” In the privacy of the cloakroom, he said, “The UFO is back.”

Halt went out in an jeep with Sergeant Monroe Nevels, who brought his Nikon camera. Halt took with him his “old micro-cassette recorder for taking notes” and asked Nevels to collect the Geiger counter. 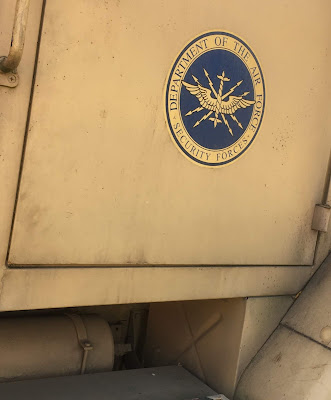 A US Air Force Security Police vehicle on show outside the Frontline Club's tent at Byline Festival, summer 2019. While the USAF Security Police played a role in "Rendlesham", I've now way of knowing whether it's contemporary with Rendlesham. The sand-coloured camouflage makes me suspect not.

There were “15-20 cops running around with light-alls” (towed searchlights on trailers) when they arrived at the scene. Halt went forward in a group of five to check out whatever it was with their “first generation” light scope had seen. He was shown three indentations in the ground where he was told “the craft landed the first night”. (Halt showed us his plaster cast of one of the indentations.) Neville’s Geiger counter showed “nothing significant by way of background radiation.”

Then they “watched for several minutes” a bright red irregularly-shaped glowing object, in the nearby farmer’s field, bobbing up and down as it moved towards the forest, panicking the farmer’s livestock, and “glowing, dripping and sending off sparks. The object “suddenly silently explodes into five white balls and disappears.” Next came “multiple objects, moving in formation at 500 feet” which Halt followed. After that, they saw two objects at “two or three thousand feet”, one “comes over us and a beam comes out of it, you could see dust particles in… the beam – one of two of objects goes over the Bentwaters base, the beams fired into weapons store.” The Suffolk Police were called out too, but the local post office had been broken into and that took priority. 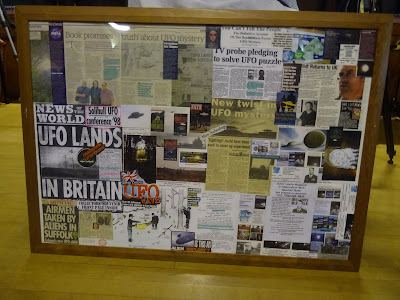 The next day “the Wing Commander (Major General Gordon E. Williams) drives in.” When Williams heard Halt had made a tape, he asked for it, so he could take to it the next weekly Third Air Force meeting. When the wingco returned from his meeting, Halt asked, “Boss, do I still have a job?” Williams returned Halt’s tape recorder, telling Halt, “Everybody listened… What do we do? Nobody had an answer.”

Halt’s boss decided “It happened off the base it’s a British affair.” When the British liaison officer returned from his holidays, Halt wrote him a memo, the carbon copy of which “disappeared.” Then “nothing happened… I was relieved this was going to go away… this is not career enhancing.”

“Two years later, Mr Warren gets involved” with a Freedom of Information Act request for Halt’s memo. “We had to release it,” Halt then “had to go into hiding, no comment, no way, I don’t want to get involved.”

Halt told how he quit RAF Bentwaters not because of “the incident” but because of the new commander, Sam Morgan, who he claimed bore him a grudge after Morgan’s son, also in the US Air Force and stationed at Bentwaters, had earlier run-ins with the Security Police. Halt got a job in Germany, that worked for Dick Cheney’s Department of Defense. Of RFUI, Halt says it was fortunate it didn’t harm his career, as it did harm the careers of the NCOs.

According to Halt, there were “spook fingerprints” all over Rendlesham “from day one.” Halt later found out that the CIA’s Dr Chris Green, believed to be “liaison” to the White House on UFOs – flew into the base days after the incident without his knowledge. Years later, Halt received a letter from a man who was in the Bentwaters air traffic control tower during “Rendlesham”, who claimed to have seen “three clearly triangular craft with lights”. His source added that “everyone on air traffic control who reports a UFO has been decertified and becomes a cook or mechanic.” 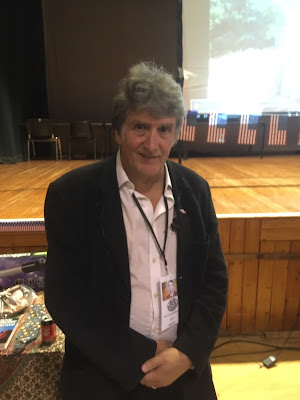 Malcolm Robinson at the conference

* A possible 40th anniversary Rendlesham “special memorial event” is planned for Woodbridge in 2020, details will be at here.

This article was amended on 19 02 20 to correct some spelling errors in names, also to correct what "light-alls" are. I am grateful to Fortean Times reader Andy Robertson for pointing these errors out.

Posted by Matt Salusbury at 13:09 No comments: