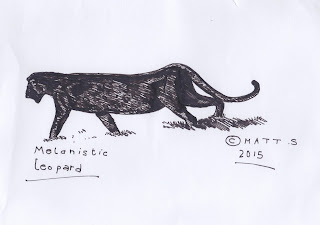 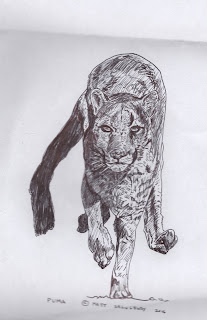 Melanistic leopard (left) and puma (right). Pumas are not black


A recent article in the Telegraph claims the "mystery of the Beast of Bodmin" is "solved." The story, which came to the Telegraph via Danny Bampling of the British Big Cats Society, goes that Mary Chipperfield, owner of Chipperfield's Circus released three pumas of a consignment of five on on their way to "their new home" in Dartmoor Zoo back in the 1970s. (The story goes that she'd been forced to close down her zoo in Plymouth, and that only two of the three pumas destined for Dartmoor Zoo arrived.)

Shown in the article is a library photo of what's clearly a brown puma on Dartmoor, said to be a photo of the Beast of Bodmin. Mystery solved?

Not exactly. I'm not disputing that it's a photo of puma, and I've no reason to think it's not genuine. Some of the sightings of the Beast of Bodmin - Britiain's best known "Alien Big Cat", frequently seen on Bodmin Moor - are clearly of pumas. The Beast killed a number of sheep, and has the distinction of being the only British big cat on whose account the Royal Marines were mobilised on the Moor on an operation to go and find it, with "shoot to kill" rules of engagement. (Some Marines claim to have caught a brief glimpse of the Beast while on patrol.) There was also a bizarre unsuccessful employment tribunal case brought by a newspaper photographer who claimed he was made to fake Beast of Bodmin photos, about which more later. (Let's just say it involved someone who's about to in the news again, so I'm being coy about the details while I gather evidence for a story.)

The problem with the Beast of Bodmin, though, is that most sightings were of a large, BLACK cat, closely answering the description of a melanistic (black) leopard. For some reason, nearly all the reports of leopards seen in the wild in the UK are of melanistic leopards. I've been documenting big cat sightings in Suffolk for over two years now, and, yes, plenty of sightings of black leopards, and quite a lot of sightings of pumas too. Pumas are from the Americas originally, and they vary in colour from sandy light brown to grey, red brown or a dark chocolate brown.

The point is that pumas are almost never black. There were two cases of pumas shot in Costa Rica in the early 20th century that were black, but they weren't black all over like the black big cats (melanistic leopards?) seen in the wild in the UK. The Costa Rican black pumas had light undersides. Early European explorers in North America in the 17th century reported something they called a "jaguarette", something puma-like with a light underside. It's possible this was either a misidentified black jaguar or some variety of puma that may since have become extinct or very rare. Generally speaking, no black pumas.

Some of the sightings (a minority) of the Beast of Bodmin are pumas, then, but most are black leopards. They look similar, particularly in silhouette, and my experience of talking to about 30 big cat witnesses in Suffolk has shown that we British are very bad at identifying big cats. There is a dark chocolate variant of puma coloration (we think they may even change colour during their lifetime) so one or two black Beast of Bodmin sightings may be one of these. But the great majority of Beast of Bodmin sightings are almost certainly black leopards. Where they came from remains unexplained, not "solved" then.

I've spoken to a couple of witnesses in Suffolk who've seen - on different occasions - a puma and and a leopard in the same area. Where there are sightings of pumas or lynxes, there are often local sightings of leopards too. These animals are just passing through, and the habitats that attract pumas will attract leopards as well. The proportion of puma sightings to leopard sightings in Suffolk that I've documented is roughly the same as the pattern in different regions nationally - from a sample of just under 100, just over half are definitely pumas, a little under a quarter are definitely pumas, another quarter are some sort of indeterminate "puma or lynx" (we're not very good at big cat identification in the UK) and let's not forget another 6 per cent or so that are lynxes. If anything, the Suffolk figures have proportionally slightly more lynxes than pumas. So the sightings of the Beast of Bodmin being mostly black leopards and a few pumas would seem to follow, as it were the national average. 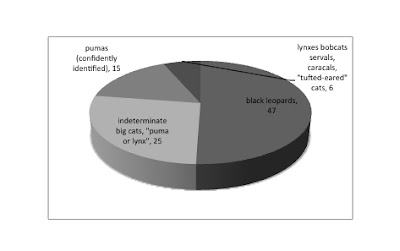 What about a possible hybrid between a black leopard and a puma? There's a problem with that - these are known, and you can go and see a stuffed "pumapard" at the Natural History Museum in Tring. But the pumapard (leopard-puma hybrids) were dwarves - not much bigger that the terriers that acted as their foster mothers. See here.

I'll be adding links and illustrations to the above over the next few days with references. It'll all in the forthcoming Mystery Animals of the British Isles: Suffolk.