My survey of phantom bell traditions and unlikely tales of the sound of tolling bells heard beneath the waves - from Dunwich and elsewhere - will feature in Fortean Times, issue FT386, on sale 13 August or hitting your doormat sooner if you are a subscriber.

A similar article appeared in issue 1 of Discover Dunwich, newsletter of Dunwich Museum.

Posted by Matt Salusbury at 15:34 No comments:

My photos appear in the History Channel's Ancient Monster Quest special In Search of Woodwoses... I think! 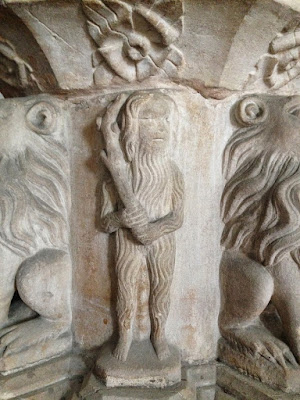 Woodwose on a font in Barking church, near Wickham Market, Suffolk, one of three possibly used by The History Channel(?) - see below.

Three of my photos of woodwoses (wildmen) appear - or will appear, probably(?) in a documentary by The History Channel, a special episode of their Ancient Monster Quest series, with the working title In Search of Woodwoses. Or at least I think they will - in any event I eventually got paid for a licence to use these, by a production company called First Row Films, that seems to be connected to this programme.

The whole affair is as mysterious as some of the mystery animals I have been investigating. Despite repeated requests for information on when Ancient Monster Quest - In Search of Woodwoses will be broadcast, I have no idea about when it goes out (or whether it already has), nor any other details of the programme. The whole somewhat puzzling saga is here.

Should you come across any information on In Search of Woodwoses, do let me know.

Posted by Matt Salusbury at 15:23 No comments: