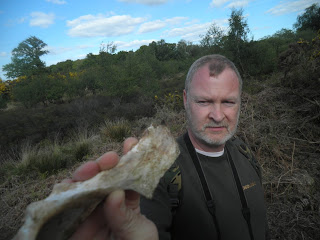 Jonathan McGowan (above, with sika deer pelvis fragment which he says bears teeth marks from a Big Cat) is a Big Cat consultant familiar to readers of this blog from his talks at CFZ's Weird Weekend, kindly hosted myself and two others from the London Cryptozoology Club (LCC) in early June on one of his regular Big Cat surveys with the Dorset Big Cats Group.

He is a naturalist and works at Bournemouth Science Society, and also does taxidermy. (McGowan said he was busy with taxidermy at the moment, most of it restoring hundred-year-old museum exhibits. The century-old sea eagle he was restoring for the Dorset County Museum had to be moved off one of the armchairs when the LCC rendezvoused at his Bournemouth home.) To his dismay, McGowan's most famous for his roadkill diet, which accounts for all the meat he eats, and has seen him interviewed on TV and radio shows in the US and Russia.

While the leopards reported in the UK used to be almost exclusively melanistic (black) leopards, now we're seeing "more spotted ones," says McGowan. The "leopard wool" (below, the under-layer of fur) we later picked off the barbed wire fences at Purbeck was from a spotted leopard. 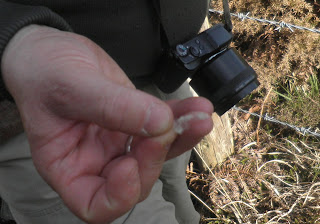 Most people taking the chain ferry from Bournemouth over the estuary head straight for Shell Bay Beach (below, famous for its nudist colony) but few beach-goers are aware that there are "leopards on the beach at night." 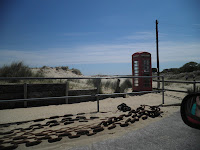 A short drive inland took us the Purbeck Reed Beds (below) and other locations nearby that I was requested to be vague about, suffice to say there's absolutely nobody about and very few signs of any people having been there recently. The tourists driving through, however, were enough to make the Big Cats go to ground for the summer, and all the signs of them that we found were in McGowan's opinion at least a couple of weeks old.Apart from a couple of seaside towns in the way, there's a wildlife corridor along the south coast from here all the way to Devon and Cornwall. 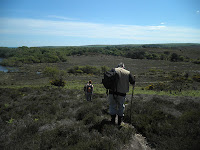 The Big Cats in the Purbeck Reed Beds, a wilderness of heathland and lakes where we went, take one of two deer a week each, according to McGowan. He says that this is less than the "three to four deer a week run over on the roads" he routinely finds, with more deer lost to car collisions than to Big Cats. Roads sometimes act as territorial boundaries - where we went was the territory of a "small female" ("she's been here at least six years" (according to McGowan) and her cubs, which overlapped with a large male. McGowan and his arborealist friend (see below) recently found "fist-sized" prints of a big male leopard in soft ground.

We did find some prints of a small female leopard (below). McGowan says leopards avoid walking on soft ground where possible, as they don't want their tracks to alert people to their existence. 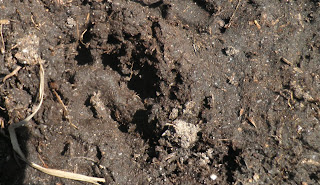 Leopard territories in Purbeck overlap with puma territories too, and McGowan told us he'd found evidence of a fight between a leopard and a puma, with bits of two different types of fur.

We found leopard scat (poo, below) lying around on the ground almost as soon as we got out of the car. At two weeks old, the action of the summer sun and rain on it means that the the scat crumbles into mostly clumps of deer hair and few beetles (yes, leopards also eat these) when handled. Leopards always mark their trails with scat, "sometimes every 100 yards," except for female leopards when they were with cubs, in which case they would bury it. 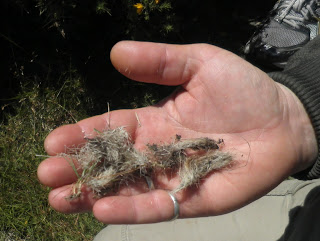 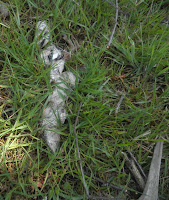 Big cats also make fastidious "scrapes" - scratch-marks in the ground laced with scent from their urine, which they use to mark territory. The scrapes are made with their hind feet and end with a little pile of earth. We saw several of these.

At Purbeck we were joined by an arborealist who helps out McGowan on his Big Cat surveys, and who subsequently made it clear he was ticking the "no publicity" box, so I've not named him. Of the British Big Cat phenomenon he said, "This isn't a joke, this is real."

The deerstalkers around Purbeck apparently aren't being very effective, as McGowan says he's been out in the reed beds at dusk and seen herds of over a hundred sika deer, the preferred food of the Big Cats. We saw some of these from a distance, with their long necks and strange, squeaky calls. We also came across a sika deer fawn hiding from us in thick woodland. There were several spots where sika deer bones were scattered (littered with the remains of several skeletons on one case). Several bones bore evidence of having been nibbled by the teeth of a cat (example below). While dog and fox teeth puncture holes in bones and break them up, only the carnassial teeth of a Big Cat can make the clean cuts to bones that McGowan pointed out to us. 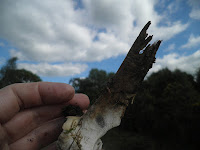 There's one concealed clearing at the edge of woodland (with sika deer bones) that McGowan thinks might be an ambush site for leopards to wait for passing sika deer. We also went to a secret location to change the memory card on one of the camera traps that McGowan's associate had set up (below). 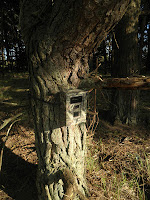 McGowan estimates that in the UK there are "leopards - a few hundred, puma the same, less lynx." The directors of some local wildlife Trusts are beginning to be open to Big Cats, he says, but the British Deer Society fear their jobs in deer management are "in jeopardy if they admit to" Alien Big Cats (ABCs). McGowan says there's evidence they're eating another introduced species, feral wild boar. He also said that some naturalists are coming to the opinion that brown hares, long thought to have been introduced by the Romans, might not have been introduced and may always have been native to southern England.

As McGowan's got a book coming out soon, I refrain from reporting on some of the information he gave us, the latest photos he showed us by Sarah Ramsden from Kent or the spotted leopard photo from "Miss Leggins", the recent "Gloucester footage" or the audio he played us of leopard roars in the very English countryside. McGowan's book is provisionally tilted The British Large Cat Phenomenon: The Dorset Enigma. 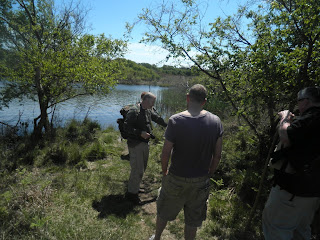 By a lake in Purbeck. Leopards are good swimmers, and can swim after deer to islands on the lake. 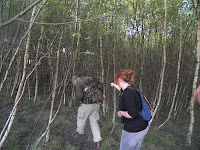 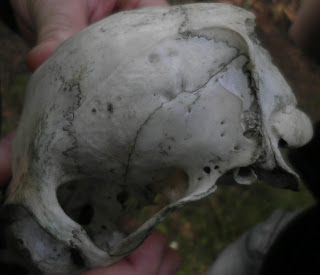 
All photos and words copyright Matt Salusbury. This article was amended 06/08/13 to obscure a personal name and a place name. This was done at the request of one of those featured in the article.