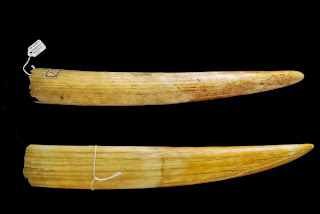 
Posted by Matt Salusbury at 07:35 No comments:

Can anyone help identify this "tooth (tusk?) of enigmatic origin"?

Above is a sketch of "a tooth of enigmatic origin ("une dent d'origine énigmatique" in the original French). It was obtained by Baron Maurice de Rothschild and Henri Neuville (he worked on the preparation of specimens at the National Museum of National History, Paris, and was a comparative anatomist and by some accounts an anthropologist too.) It was bought from Indian ivory merchants in the ivory market at Addis Ababa, Ethiopia in 1905. Its discoverers do refer to it as a "tusk" ("defense"), but they hesitate to describe it even as a tusk in most of their write-up, which is in the Archives de Zoologie Experimentale et Generale, 4th series, volume VII, October 1907.

The Indian ivory merchants from whom Rothschild and Neuville bought the tusk had no idea of its origin, and had trouble selling it as it was smaller than most elephant tusks that came their way. (The drawing is "life size" and is just under 60cm, or 24 inches, across.) Neuville said that he had talked to Somali herders and hunters who told him that it was from a big animal with an "aquatic" lifestyle, "of singular strength" and "of great size more or less comparable to a hippo" that lived in the bigger lakes of that region. Mention was made of Lake Marguerite (now known as Lake Arbeya, and a lake on the Kenya-Uganda border.

The above quotes are from my own translation, which I am still working on (it's a work of over 50 pages.) A glance at the photographs suggests that Neuville compared the tusk to numerous "anomalous" elephant tusks, mostly from the Natural History Museum London's collection, and that it didn't look anything like the tusk of a hippo, elephant or any kind of pig, and that the tusk "does not resemble any tooth of a fossil or living animal up to the present." It was not fossilised.

Other photo captions in the article suggest that a cross-section of the tusk under a microscope did not match the "grain" of a hippo, elephant or any kind of pig either.

Michel Raynal, of the Institut Virtuel de Cryptozoologie, told me he'd been in touch with Bernard Heuvelmans about this enigmatic tusk some 20 years ago, and that Heuvelmans had told him the Museum in Paris had a "numero de registration" (presumably an accession log number) for the specimen, but that "the piece was not there (lost??)"

The enigmatic tusk will be the subject of my talk at Weird Weekend this August.

Any suggestions as to the tusk's possible identity greatly appreciated. Any tips as to who to approach at the Natural History Museum, Paris also appreciated. (I understand French well, and with the help of a French-speaking colleague at work I can put a letter together, if I know what to ask.) And any offers to write a letter for me explaining what I am researching, for the benefit of the Rothschild Archive in the City of London would also be gratefully received. They need two letterheads from academics to let me look at their archive, which has a copy of the English edition of Voyage du Baron Maurice de Rothschild en Afrique orientale - so rare that the British Library don't have a copy.

On the provisional programme for Weird Weekend, I got the wrong Rothschild. Maurice was best known for owning winning racehorses and for his art collection, and for being a Senator of the Republic of France. Apart from a specimen collecting trip in Egypt, his East Africa expedition was his only zoological venture. He did sent flea specimens to his distant cousin Charles Rothschild, and I have found a reference to correspondence between Maurice de Rothschild's team and Walter Rothschild's Zoological Museum in Tring (now the Natural History Museum, Tring.)