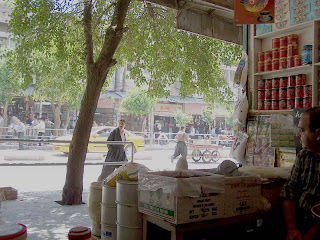 My website has finally been updated, for the first time since June (whoops!)
New additions include:

Curse of the Daleks, the forgotten Doctor Who West End stage production from 1965.

My report on Weird Weekend 2007 for Fortean Times is on their website now.

My interview with Queen of Burlesque and parapsychologist Kitty Klaw appeared in Fortean Times issue 232, March 2008. Here it is on one of Kitty Klaw's websites. (Updated 2013).

The United States 1763-2001, by John Spiller, which appears to be the standard history textbook for the final years of High School and the first year on university in that country, quotes one of my articles in BBC History from way back in 2002.

I’m down to speak on pygmy elephants at the CFZ’s Weird Weekend in August 2008. See also Nick Redfern's announcement on this.

My Time Out (London) article on the Anarchist Bookfair is now (much later) on the Time Out site.

Photographer/writer collaborations - the text to photographer Alex Masi’s photo series is now on his website at http://A Vampyre’s Tale1 click on “Text available” at the bottom left of that page.
Posted by Matt Salusbury at 10:27 No comments: