Copyright of the Daleks

From the Freelance, the newsletter for NUJ freelances, November 2013 online edition 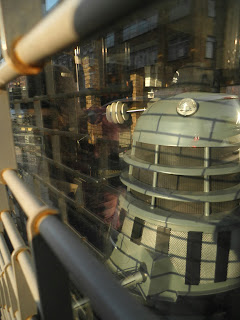 NOVEMBER 23 sees the fiftieth anniversary of the broadcast of the first Doctor Who episode. Freelances will no doubt be interested in the details of one of the lesser-known aspects of Doctor Who's genesis all those years ago - the Copyright of the Daleks.

Under normal circumstances, most secondary rights and neighbouring rights on a Doctor Who script written for the BBC should have stayed with the BBC. In-house BBC designer Raymond Cusick - a staffer - got nothing beyond his usual salary for designing the Daleks. Years later, he got a retrospective goodwill payment of a few hundred pounds (in 1980s money) for his Dalek designs.

The case of the scriptwriter who created the first Dalek series, however, was a very different matter. Read on...

Father of the Cybermen - Dr Kit Pedler, the man who invented Doctor Who's Cybermen, also from Fortean Times

Posted by Matt Salusbury at 08:48 No comments: