The Alderton woodwose of the Bawdsey peninsula 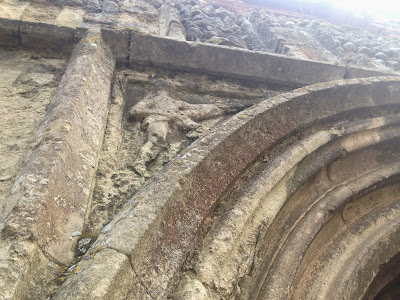 The woodwose on the porch at St Andrew's Alderton, on the Bawdsey Peninsula. He's less than a foot high, and he's charging with a pointed stick at a dragon or wyvern (below).


Take the road south past the edge of Rendlesham Forest, keep going through Butley and you eventually come to the part of Suffolk that calls itself "the peninsula." It's quite remote, and you'd think there wasn't much going on, but there was a surprising amount of traffic a couple of weeks even before the ferry opened for the Spring. We noticed several up-market local businesses with the word "Peninsula" in their name.

It's out of the way enough that it's still got a couple of prisons on it, a young offender's institution and an open prison where News of the World phone hackers seem to stay a remarkably short time before their release. So relaxed is security at Hollesley open prison that last year they were burgled, someone broke in and nicked industrial quantities of tobacco from their prison shop. When we pulled into the Shepherd and Dog pub in Hollesley, there were some uniformed prison officers off duty having a drink on the sofas.

On the edge of Hollesley is the Suffolk Punch Trust. The Prison Service accidentally saved the Suffolk Punch breed by using them on their prison farms. It's not open this early in the year, but we caught a glimpse of some magnificent young Punches in a nearby field.

Nearby is Shingle Street, and on the winding road down to Shingle Street, on Easter Sunday 2008, a prison officer had the peninsula's only recorded big cat sighting. Heidi Hawley saw a "giant" dark and fawn-coloured cat, initially mistaken for an Alsatian, the size of a large dog, "beautiful" with "great big eyes".

It ran across the road in front of her, clambered up a steep bank, turned round and looked her in the eye before finally disappearing into undergrowth. Colleagues were aware of "similar sightings in the area in the past. The East Anglian Daily Times caused confusion by running the story with a photo of a lynx - with the caption "A lynx - similar to the big cat seen in Suffolk", although the word "lynx" didn't appear in the text. Shingle Street would be of interest to a big cat - there are sheep (unusual for this part of Suffolk) and lots of reed beds to hide in. 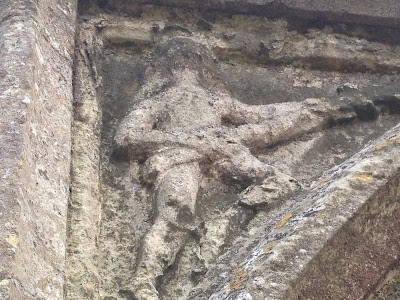 Further south along the peninsula is the village of Alderton. Its St Andrew's Church is hard to find, surrounded by houses, and unlike most Suffolk churches you can't find it by looking out for its tower. Inside it's very bare, like a giant barn. It turns out it may well have been a barn at some point. An 18th century print hanging up in the porch show it as a ruin with a hole in the roof, and most of the tower is missing. There's a modern bell on some sort of scaffold just outside the tower. St Andrew's seems to have been restored by the Victorians. There's a "WARNING The tower is dangerous" sign outside. 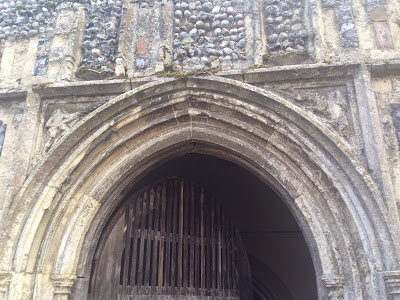 The porch, showing the woodwose and its dragon antagonist

The woodwose is just under a foot high, and like the ones in Peasenhall, Cratfield and Badingham, he's squaring off with a dragon or wyvern (hard to tell, it's so eroded away) on the opposite arch of the porch. Unlike the other porch woodwoses of Suffolk, who tend to have raised clubs and shields, this woodwose is charging with a spear or pointed stick. 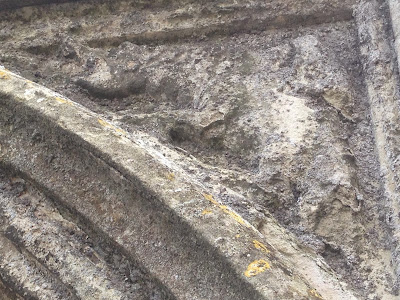 Down the road at Bawdsey Quay is Bawdsey Manor, where radar was invented, and Alexander's International College (one of only two accredited language schools in Suffolk, the other's in Bury), and the ferry across the Deben to the back of Felixstowe. The giant container-unloading cranes of Felixstowe Docks are visible on the horizon.

Posted by Matt Salusbury at 03:04 No comments: