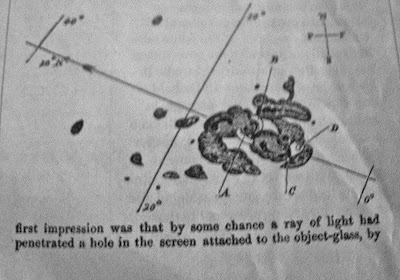 Shortly before the 21 December 2012 end-of-the-world due date, a confident NASA released early its "Why The World Didn't End Yesterday" video. This rubbished the "Mayan prophecy" baktun long count Doomsday scenario, and anticipated the next end of the world panic – solar storms!

We've now just passed the peak of 11-year long Solar Cycle 24, which ends in 2020. The nightmare solar storm scenario would be a repeat of the Carrington Event of 1859.

The Carrington Event (named after the Scottish astronomer Richard Carrington, who observed it) was what we now call a Coronal Mass Ejection (CME) – it sent a burst of charged particles out of the sun and slamming into the Earth's magnetic field. So powerful was the Carrington Event that the telegraph machines of the day caught fire, and continued to type even after they'd been disconnected. The aurora borealis was visible as far south as Cuba, and woke up campers in the Rockies in the middle of the night – they thought they were in daylight.

Back in 1859 there was no heavy reliance on GPS satellites, and little by way of a national grid. There have been warnings of the havoc that 21st century solar storm could wreak

In the "Quebec blackout" of 1989 something – probably a solar storm – crippled a power station and cut power to millions of Canadians, while triggering what NASA now call "electrical anomalies" across the US. There is a danger, it seems, that solar storms can turn the electrical power grid into something like a giant convection heater. And the "Halloween storms" of 2003 disabled instruments on dozens of orbital satellites, some permanently.

With the expectation that the solar cycle would peak around mid-2013, it was predicted that GPS would go down – and that wouldn't just mean motorists losing their way. All sorts of crucially essential stuff from nuclear power stations to some very expensive hospital life support kit, and most technology driving the financial markets, would fail. We could be a single solar storm away from the end of civilization. 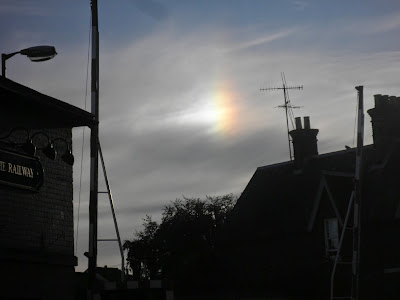 Not a sunspot, but another solar phenomenon, a "sun dog", observed in the sky over Saxmundham, Suffolk, September 2013. Photo copyright Matt Salusbury

And such geomagnetic storms could knock planes out of the sky. (Delta Airlines admitted at the end of 2013 it had – at some expense – diverted 12 transpolar flights away from the Poles that year, fearing solar storms.)

Given the readiness of so many people to get excited about some misunderstood Mesoamerican calendars, it was puzzling how extraordinarily blasé the world was about the impending civilization-ending Solar Cycle 24 peak.

Lika Gukathakurta, head of NASA's Living With a Star Program, reassured the world in the "Why the World Didn't End Yesterday" video that "this is the wimpiest solar cycle of the last 50 years, reports to the contrary are exaggerated." But strangely, the world didn't need any reassuring. Here was the very real possibility of the End of Civilization no one seemed even to have heard of it, let alone care about it.

Where were the tin-foil hat brigades, ranting their misanthropic solar storm rants in the bus stations and shopping centres? Nothing. Perhaps Armageddon fatigue had set in after the Great Mayan Prophecy Disappointment. Or the solar storm scenario's technological aspects had made doom prophets wary, causing recollections of the Millennium Bug that never was.

Rather than heading for the hills, the vast majority of people weren't even aware of the absolutely gigantic X9 solar storm that erupted from the sun on 9 August 2013. ("X" denoting the strongest class of solar storm.) Fortunately for us, the burst of plasma it spewed out was on a trajectory that was "not Earth-directed", as Joe Kunches of the National Oceanic and Atmospheric Administration told the space.com website. "We did luck out," added Kunches. (Another, earlier, weaker CME in April of that year also failed to be "earth directed, but dealt the Curiosity rover a harmless glancing blow as it travelled on its way to Mars, after Mission Control had temporarily switched off Curiosity as a precaution.)

We also appeared to luck out on October 25 2013, when two "monster" X-class solar flares left the sun, but in the event weren't up to much and were widely unnoticed.

While Spaceweather.com did report some VLF and HF radio blackouts, the dearth of CME-based apocalypse-mongering turns out to have been right on the money. By the end of 2013, Stanford University's Leif Svalgaard told the American Geophysical Union, "none of us alive have ever seen such a weak cycle." In the course of Solar Cycle 24's peak, we had learned that the lower than usual pressure of the heliosphere – the mass of charged particles and magnetic fields surrounding the sun, meant that CMEs were able to expand more as they shot through space, dissipating their strength by the time smacked into our own atmosphere.

Meanwhile, the aurora was visible in the Essex summer skies of 2012, and a travel agent promised "with astronomers predicting the peak of the solar cycle and incredible sightings already reported, winter 2013/14 looks likely to be the best time to see the magical Aurora Borealis." The end of the world was cancelled instead we got the world's greatest light show.

Fear not, disappointed apocalypse watchers! The Met Office has announced that, as of Spring 2014, it would run space weather forecasts to "allow government and businesses to take swift action to ensure services are maintained." The Met Office warned it wasn't over yet – the "largest impacts can occur at any time during its 11 year cycle" up to 2020.

Some Doomsday enthusiasts may be losing faith in the capacity of solar storms to frazzle us back into the Stone Age. They may take comfort in 2013 TV135, a "massive asteroid" identified by the Crimean Astrophysical Observatory in October as heading our way – to arrive with a force of some 2,500 megatons on 26 August 2032. Hurrah! Until you read the small print – the chance of it actually striking the Earth is around one in 63,000. The End of the World ain't what it used to be. (Time magazine 17 October 2013; The Guardian 13 October 2013)

Posted by Matt Salusbury at 05:42 No comments: