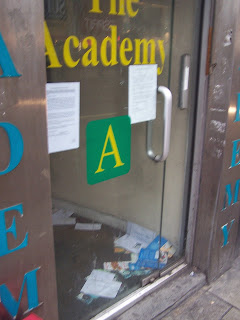 Not all language schools in the UK are doing so well. This one, at 145 Oxford Street, London W1, appeared to be locked, with mail piling up in the doorway. A notice of eviction served by the property's owners, Prudential, was sellotaped to the door as of early March.

Mario Rinvolucri, founder of Pilgrims School of English - in Canterbury in the South East of England - told that Gazette that Pilgrims’ own latest figures, and the intelligence he’s getting from across the UK EFL industry, show that ‘receipts are extremely good’ in the UK industry as a result of the record rise in the value of the Euro against the pound. Pilgrims has been picking up a lot of end of season executive courses from the Eurozone (the 15 EU states currently using the Euro currency) in a development which is bucking the general trend towards ‘doom and gloom’ in the recession-bound UK economy.

Mr Rinvolucri conceded that corporate clients were still on 2008 budgets, and it remains to be seen whether the 2009 budgets of corporations will maintain that level of spending in the current global economic climate. The success in recruiting from the Eurozone is also helped by the increasing use of ‘teacher agents, ’ according to Mr Rinvolucri. These are practising teachers in, for example, large comprehensive schools in Germany, who persuade some of their colleagues to come on Comenius courses, or teachers in private EFL schools that offer free taster courses for summer schools at Pilgrims. Teacher agents have all been on Pilgrims summer courses, and ‘are much more teachers and much less agents.’
Posted by Matt Salusbury at 10:01