Get yourself a record - New Statesman article on police databases 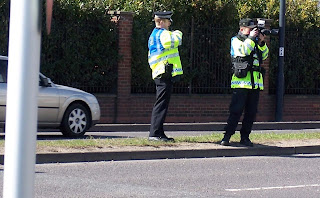 These officers from the Metropolitan Police Forward Intelligence Team (FIT) apparently either didn't spot me or didn't bother to record my presence at the demo I was covering at Harmondsworth immigration detention centre near Heathrow on 8 April 2004. Or so the Met's Crimint database would suggest. (Follow link to article below.)


"Get Yourself A Record" - my article in the New Statesman abhttp://www.blogger.com/img/blank.gifout data gathered about me by the Metropolitan Police Forward Intelligence Team and held on the Met's Crimint database is now online here
.

Since then I've got a reply from the Met's Subject Access Office (partly) "rectifying" an incorrect record of a non-existent arrest following my "legal challenge." Watch this space for details.

There's a related Panorama documentary on police surveillance planned for broadcast on Monday July 6.
Posted by Matt Salusbury at 06:14

And so's your earlier one, 'Caught On Camera':