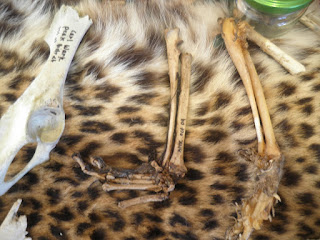 A display of evidence of large cat kills gathered by McGowan over the years - bones showing bite-marks and chewing that could only have been made by something like a puma, leopard or lynx. (This photo's from an earlier Weird Weekend but his display was back again this year.)

After 25 years in the field, Jonathan McGowan now prefers to call it "large cat research" - he prefers the term "large cats" to "Big Cats" because they're "not technically Big Cats, some of them… One third, maybe, of all these animals do not fit" the Big Cat description. (See a write-up of McGowan's Weird Week 2007 talk on British Big Cats.)

McGowan - speaking at the CFZ's 11th Weird Weekend in August 2012 - thinks some of the large cats sighted may be a hybrid between pumas and large feral domestic cats. Some of the black cats spotted do not have the "behaviour of leopards." Some are "big black cats with small heads" while others are heard "yowling" – very un-leopard-like. But McGowan has also heard the leopard's distinctive "coughing" alarm call to its cubs in the British countryside.

Now he's "bogged down" with the data that continues to come into him, people contact him with "up to a dozen reports a week, some are accounts of encounters dating back to the 1920s."

Says McGowan, "Deer are the key to big cats… Throughout Britain, wherever there are deer in large numbers, there a large cats. "sika deer are great breeders" and, like the large cats and "a third of our wildlife" aren't indigenous." Leopard, puma, lynx are - he believes - "a recent additive to our fauna – there are no reports before the (19)50s, 60s' 70s."

"Large cats are Houdinis... If you were to release two cats on the edge of London, they'd be in Cornwall in two weeks' time, says McGowan. They would "let themselves be known" to each other by scent-markings and scat"(poo).

McGowan talked us through slides of "cat scrapes" – visual signs when they do a wee or a poo. Sometimes these are in the form of star-shaped zigzags to mark territory. I know from taking my own domestic cats into the forest for a walk in Suffolk (see here for evidence that I'm not making this up) that doing a poo in the woods and the way they cover it up is a very serious business indeed for cats.

Apologies for my rubbish illustrations at the time (below), but McGowan also demonstrated the clear differences between dog and cat tracks. The toes on either side of the dog tracks will be level with each other, while the toes of cat tracks are not level with each other, the arrangement of toe prints is asymmetrical, in the way that the fingers on our human hands are of different lengths.

Large cats "hide behind gorse bushes to pounce" ... Heather in particular is "Big Cat country." Reedbeds are "ideal habitats for our sika deer" and therefore for large cats. And you can even find evidence of "pumas and leopards in the same territory" in some parts of the UK.

"US servicemen have admitted to releasing puma mascots" in or at the end of World War Two," claims McGowan. I'd heard that there's good evidence for this in Australia, but I'd not heard this claim made for the UK and I'd be interested to see the evidence. As a history graduate I'd be happy to follow up. The USAAF and US Army units based in the UK all have regimental archives that would point to the existence or otherwise of mascots – official or unofficial. Regiments have associations of veterans, many of whom are still alive and contactable.

He also alleges of the recent furore over a deer carcass on National Trust land in Gloucester, of which a DNA analysis came back as "fox", that the National Trust "hid data from the deer carcass" indicating it had been nibbled by some kind of cat.

If the big black cats in the UK countryside are black leopards, and breeding, then surely we should be seeing some spotted leopards as well, commented Ronan Coughlan from the audience. McGowan has heard "more and more reports of normal spotted leopard" from Kent. And there is also at least one "chocolate brown leopard in the UK." (Grey or brown "clouded leopards" are known from Borneo, where they are rare but numbers are known to be in four figures, and there's a grey clouded leopard cryptid, the pogeyan, said to be in the north of Kerala state, south India.

McGowan's as ever excellent talk was rounded off by CFZ director Jonathan Downes announcing that a new CFZ database of 5,600 UK Big Cat sightings would soon be ready, and inviting members to come up with requests to run past it. I will be putting it through its paces before long, as my next book after the forthcoming Pygmy Elephants will be Mystery Animals of Suffolk, which will look at Big Cats such as "Paws" in the 1990s as well as more recent sightings of something black in Brandon, on the Norfolk border.

McGowan told me he'd seen a puma by the side of a big road near Ipswich about two years ago. My antennae also started twitching at McGowan's mention of reedbeds, heather and gorse as Big Cat country, there are abundant habitats of all three in the Suffolk coast, and the establishment of a wildlife corridor in the north of the country means these habitats are about to get bigger. Deer are so abundant in Suffolk they're becoming vermin, (their great numbers are impacting badly on woodland bluebells in particular in the county) and while there's no established sika deer population in the county yet, they're known to be moving in and out of the county from Norfolk, and it's only a matter of time before they make Suffolk their permanent home. 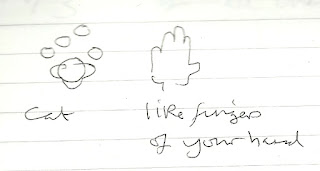