The End of the World (book review) 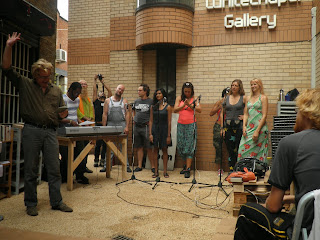 The Rev Billy (left) and the Stop Shopping Choir at a summer 2013 "happening" outside Freedom Bookshop in Angel Alley, Whitechapel, during one of their occasional visits to London. Photo: copyright Matt Salusbury

Its surreal gallows humour would melt the heart of the most curmudgeonly lizard-bothering End Times freak, with The End heralded by an imagined "white-hot two-day blowout sale as Best Buy" and by the appearance of new eco-disaster cash-in products like "drowning Elmo toys." A wonderfully vivid opening scene relates non-stop breaking news pay-per-view reality disaster movies still playing on the i-Phones clutched in the cold, dead hands in the piled-up mounds of corpses when it's all over. But there's a serious side, US Geographical Survey data on "the widespread mortality of their forests" also gets a look in.

As Rev. Billy reminds us, "We are part of the tornado," urging the reader to take personal responsibility for the coming Shopocalypse, and to take steps to avert a climate change Armageddon through political activism, or as his Church of Stop Shopping Choir so succinctly put it, "Changealujah!" The Rev. Billy's the alter ego of New York actor and street performer Bill Talen, and the Church of Stop Shopping's "Forest Faith" enviro-creed owes more to Occupy Wall Street than to any of "the disastrous religions."

Nor is it a haranguing "I'm better than you" critique from the sidelines – the Rev. Billy and his associates have actually gone out and done some of the things The End of the World describes – one chapter recounts an impromptu assembly held by Occupy mass-arrestees in underground cell under a New York police station, another a guerrilla Thanksgiving dinner in the lobby of the Bank of America.

The End of the World will fit neatly in your pocket, and its "impossible" poetry is up there with the best bits of the Beat Poets, but with much better gags.