The woodwoses of Wissett and the imps in Wenhaston Doom 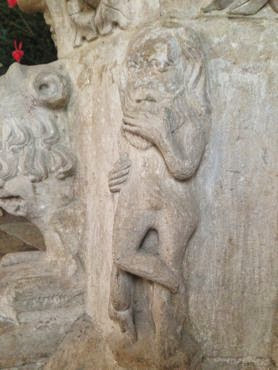 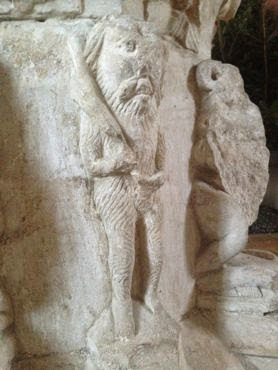 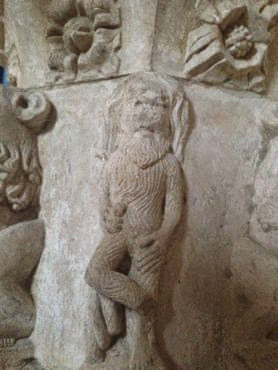 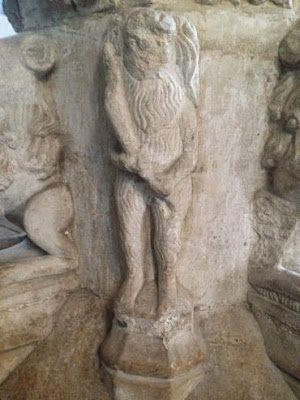 I discovered another Suffolk church with woodwoses in it, at Wissett, north of Halesworth. Not only does it have woodwoses on the font, there is evidence from tiny flecks of turquoise paint and from parish records, that they used to be painted. (Last painted 1492, according to parish records.) They are slightly vandalised, with the faces more scratched out than the entire heads chiselled away, as at other churches like Theberton and Covehithe.

Particularly interesting was the beard-stroking intellectual woodwose, deep in thought. (See above.)

I then went to the local pub, The Plough at Wissett. I was very proud of myself at having cycled from Dunwich to Halesworth in 40 minutes, but and two of the punters at the pub had arrived on horseback, with their still saddled and bridled horses let out to graze on the grass in the garden with the tables round the back. I later found that Wissett has two phantom Black Dogs, said to haunt the two little humpback bridges near the village, and enough ghosts to fill a book, The Wraiths of Wissett.

Soviet-style Social Realist art is alive and well on the Wissett village sign, which glorified a tractor. (The other side of the sign has a more traditional horse-drawn plough.) 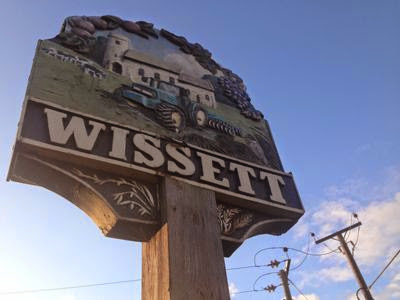 I also stopped off at Wenhaston, and discovered something rare in pancake-flat Suffolk - a serious stretch of downhill on the way to the village. The church has the Wenhaston Doom, the Last Judgement. There's some fairly boring stuff on the left of "virtuous" princes standing naked before God, being judged by angels, and then it gets a bit more Heavy Metal album cover as you go further to the right of the painting. There's something going on with weighing souls and comparing them to the weight of imps. If your soul weighs as much as two imps, you seem to be in the clear. 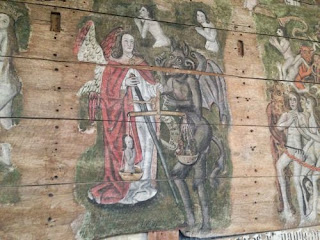 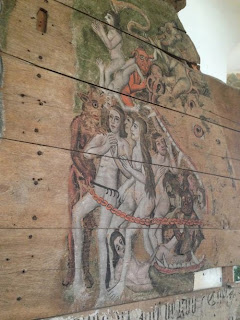 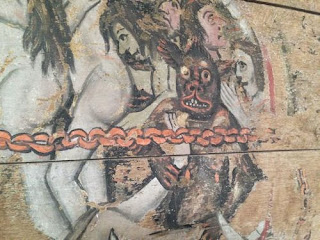 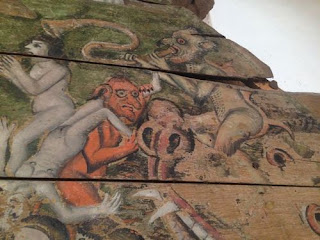 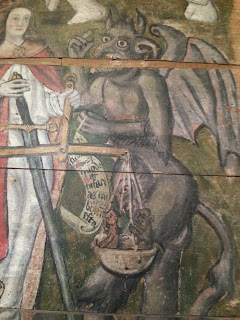 See here for the "witch-weigher" in Oudewater, Holland, where they used to weigh people to make sure they weren't witches. They generally weren't. Many of East Anglia's convicted "witches" in the witch trials of the seventeenth century were convicted for "feeding imps," which generally took the form of exploding mice or ducks, giant flies, legless horned greyhounds of headless bloodsucking babies. And Black Dogs of course. These descriptions were mostly extracted under torture, with some copied and pasted from 15th century demonologies. Black Dogs were probably implanted into the testimonies to give them a bit of local colour and fake authenticity. 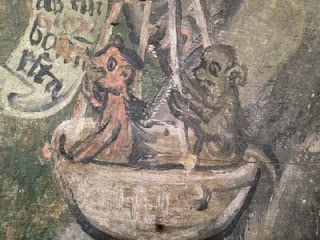 Imps on the Wenhaston Doom. If your soul weighs more than two imps, you appear to be in the clear.

It's all in the forthcoming Mystery Animals of Suffolk.